This 2020 Netflix documentary examines the origins and development of Latin American rock and the role it has played in the region’s history and politics. 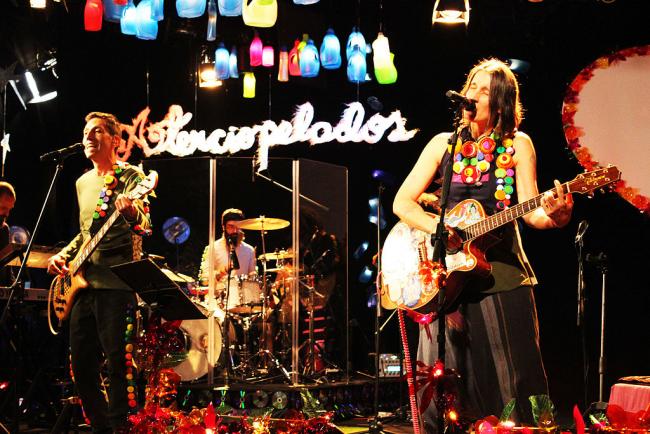 When I was four years old and living in Monterrey, Mexico, I was introduced to the two songs that baptized me into a fan of Latin American rock: “La Muralla” by Enanitos Verdes and Soda Stereo’s “Persiana Americana.” So, when I first heard about the Netflix series Rompan Todo, I was elated to see an in-depth examination of this anti-authoritarian music. The documentary, which was released December 16, 2020, provides insight into the evolution of the Latin American music genre. In six episodes, the series not only succeeds in engaging newbies into Latin American rock but also gives aficionados del rock a comprehensive overview of the iconic artists and moments that have established rock in Latin America while also keeping the genre ever evolving.

In Rompan Todo, there are two central questions: what is Latin American rock and how does it differ from its North American counterpart? Produced by renowned videographers and composers Nicolás Entel, Picky Talarico, and Gustavo Santaolalla, the documentary is an ambitious undertaking and examines the genre across the region’s 33 countries. The documentary mostly succeeds in this endeavor, tracing the origins and the socio-political evolution of rock from the late 1950s into the early 2000s through interviews with icons who shaped the genre. However the documentary, like much broad Latin American research, glosses over subregions that are often under-examined, if not altogether ignored.

For rock aficionados who have not researched the origins and history of “rocanrol” in Latin America, the documentary explains how the genre began as an import from the United States. The music was translated slowly into the Latin American mainstream with middle-class heartthrob bands like the Teen Tops who performed almost word-for-word translations of American rock songs and gained popularity within and outside Mexico in the 1960s. In its early stages, rock in Latin America was characterized more by coiffed men in suits—like the Teen Tops—than its later rebellious aesthetic. Latin American rock began to shed its “nice boy” image during the social tumult of the 1960s and into the 1970s, at a time when rock was forced underground due to events like the Avándaro rock festival in State of Mexico (the Mexican Woodstock) and the rise of authoritarian regimes throughout the region. During the Cold War, Latino artists latched on to this growing underground rock scene, using it to implicitly and explicitly defy the authority of the region’s dictatorships. Chilean artists like Victor Jara became martyrs of the anti-dictatorial movement, and Argentine bands were derided by the military government. In the Andes, artists combined the translated U.S. rock songs with folkloric themes and sounds, eventually transforming them into the subversive anthems that have become emblematic of classic Latin American rock.

Weaving throughout the second half of the 20th century, the documentary relies on interviews with rock and roll greats like Fito Paez, members of Café Tacvba, Soda Stereo, and Los Prisoneros, and music producers like Oscar López who played critical roles in the distribution of Spanish rock throughout Iberoamérica. Although only briefly, some artists, like Andrea Echeverri of Los Aterciopelados, mention the gender disparities within Latin American rock and roll. The documentary also hints at the broader disparities within the world’s most unequal region through its portrayal of the region’s racial, gender, and social representation in rock and media.

The series follows a very traditional documentary style. Compared with other music documentaries—like the documentary Supersonic on the English band “Oasis”—Rompan Todo has little innovative visual storytelling, proceeding chronologically and tracing the region’s historical events, signposted by Latin American crises. The documentary alternates between interview and stock footage, a formula that becomes tedious halfway through the series. It is redeemed, however, by the drama of the dictatorships and the interviewees themselves. The visually stunning footage from concerts and protests shows how rock and roll music figured in the political turmoil of each decade. The genre emerged from an underground music in the 1960s and 1970s into a rallying cry against authoritarian governments from the Southern Cone to Mexico.

While there are several moments that define the evolution of rock and roll in Latin America, perhaps one of the most consequential—and my first introduction to rock—was the release of the Rock en Tu Idioma (Rock in Your Language) albums in 1986. These albums not only consolidated the identity of Latin American and Spanish rock but furthered its reach across Iberoamérica. Rock en Tu Idioma represented a marketing strategy that packaged and sold a singular Latin American identity both within and outside the region.

In the first half, the documentary focuses more on Mexico, Argentina, and Chile. In particular, it looks at the region’s larger and international cities, explaining how artistic congregations interacted in these centers of socio-political upheaval throughout the decades. The second half brings Colombia into the picture with artists like Andrea Echeverri and Héctor Buitrago and their influences. But there are some glaring geographic gaps in the documentary’s overview of rock in the region, with little attention given to Central America or the Caribbean until the last few episodes. The viewer is left wondering what impact rock had on that subregion, or how Central America and the Caribbean might have influenced Latin American rock. As a project that aims to embrace Latin America, this oversight is glaring, and, unfortunately, common in both media and academic coverage of the region.

Towards the last third of the documentary, we see a genre transformed from a Spanish copy of its American neighbor, into a musical and cultural institution in its own right. The documentary quickens its pace at the end of the series, speeding through the 1990s and early 21st century. It introduces more modern-day groups like Calle 13 and gets to the question,“what is next for rock in Latin America?” In covering the pandemic, recent cartel violence, and political unrest, the documentary demonstrates how the genre continues to defy authority. Examples like the “Patria y Vida” protests in Cuba and the rallying cry “There’s a rapist in your path” by the Chilean collective Las Tesis show how rock is still eliciting change throughout the region. The final question that the documentary leaves us to ponder is not just what is next for Latin American rock but how it will continue to influence the region’s social consciousness.

Humberto J. Rocha is a reporter covering the U.S. legal system and is a freelancer covering politics and culture in Latin America. A Mexico City native and a Harvard and Oxford graduate, Humberto has reported for Forbes, Hearst Connecticut Media, and The Yomiuri Shimbun and other outlets.