Roots and Resistance: The Bartolina Sisa Women’s Movement in Bolivia

The work of this Bolivian women’s group illustrates the long arc of Indigenous resistance to colonialism. 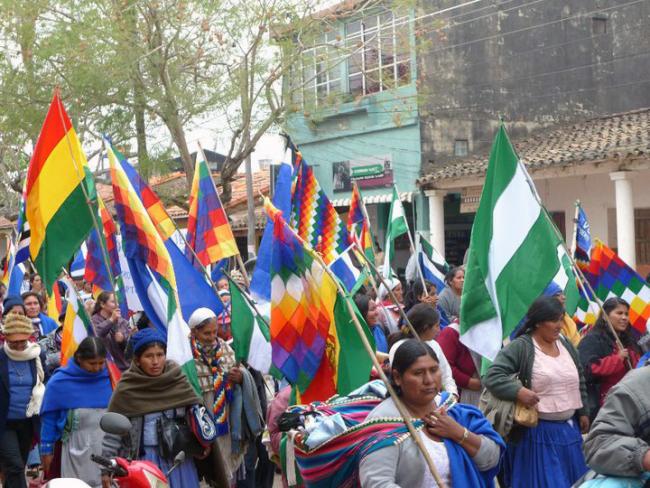 When Bolivian campesino movements took to the streets last year against the country’s coup government, they were upholding a centuries-old tradition. The road blockade campaign spanned the country, a strategy that recalled Túpac Katari and Bartolina Sisa’s rebellion against the Spanish in 1781, and upheld deep currents of historical consciousness in Bolivian Indigenous movements.

Histories of resistance in Bolivia have empowered Indigenous movements for centuries through oral history and collective memory. These histories orient the movements’ demands, provide strategies for revolt, and highlight the long arc of Indigenous resistance to colonialism.

A noteworthy example is the November 1979 road blockade campaign demanding an end to the short-lived military coup government of Colonel Alberto Natusch Busch. The Sullkawi blockade was especially important due to its strategic geographical position on the area’s heavily trafficked highways.

During the protests, women took charge of the blockades during day shifts, and the men at night, as blockade participant Lucila Mejía recalled in her book Las Hijas de Bartolina Sisa. This rotation allowed some residents to take care of the children and prepare food while others stood their ground on the highway. The social pressure to participate was intense, Mejía explained. If residents of the community refused to engage in the rotational blockade maintenance, they were labeled traitors and ostracized from the community.

“When the danger [of military intervention] increased, we placed a sentinel on a nearby hill. They alerted us with dynamite,” Mejía said. “When the explosion signaled us to action, we ran out from all directions to occupy the road.” During periods of heightened risk, the children were kept away from the barricades, and the men and women worked together.

“In this way, we shared the danger,” Mejía noted.

During the blockade, the activists inspired each other by telling stories about past rebellions. Mejía recalled "radio programs which even the children listened to" that told stories of famous Indigenous resistance leaders of the past, and that "took away our fears."

In a 1990 interview archived at Bolivia’s National Museum of Ethnography and Folklore, Mejía affirmed that the participation of women in this blockade was critical and that more was demanded of the women than the men. In describing her experience, she said, “we campesina women participated actively day and night.” Although the women mostly worked day shifts, they also worked as guards at night, and supported the men with food and reinforcements, she explained, but the women did not enjoy the same backing from the men.

“So, with our babies, we lined up on the road,” Mejía said, “and we fought that way.”

The sharing of stories of resistance around the 1979 Sullkawi barricades and national roadblock campaign points to the power of the past. Such protests, along with workers’ strikes, eventually led to the downfall of the Busch military regime. In their successful organizing efforts, the campesino groups used historical consciousness as a tool to build morale among members and sustain the national blockade protests for over a week.

The Legacy of Bartolina Sisa

Anti-colonial organizing by Indigenous movements in Bolivia has much of its roots in the 1781 rebellion against Spanish rule led by Túpac Katari and his wife, Bartolina Sisa. According to Sisa, the goal of the rebellion was to establish Indigenous self-rule. Historical records describe Sisa explaining that Katari inspired rebels with the promise that “they would be left as the ultimate owners of this place, and of its wealth.”

Sisa established a route for future women organizers to follow.

“Bartolina Sisa was a revolutionary woman who fought against the colonial system,” explained rural women’s leader Felipa Huanca in the book, El Proceso de Cambio en Bolivia: Una Mirada Desde las Bartolinas. “This opened a path for us: to fight for our children, fight for our community, for our country.”

Researcher and activist Rosario León writes that Sisa is “the battle flag of peasant women,” calling her “an historical reference point and symbol belonging to a common socio-cultural universe that includes Aymara peasant women.” 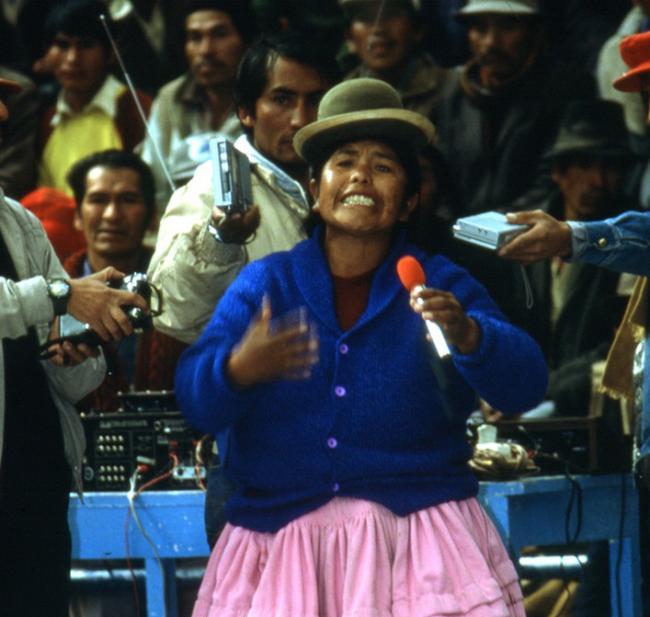 Sisa’s legacy in the Bolivian Indigenous movement was formalized in 1980 with the creation of the Federación Nacional de Mujeres Campesinas de Bolivia “Bartolina Sisa” (the National Federation of Women Rural Workers of Bolivia “Bartolina Sisa”). Since the group’s founding, the Bartolinas, as they call themselves, have called for broader women’s participation in politics and union activity, protested abuses and injustices against campesina women, and demanded access to better education, health care, and basic services for rural communities.

An economic crisis in the late 1970s impacted rural women particularly hard. Shortages in basic home supplies and food pushed women out of their role in the home and more directly into union organizing. For many rural women, this period was marked by “decisive moments in the development of a gender identity, of belonging to a common universe, which was defined by the discrimination they suffered as women,” writes León.

In response to this crisis, the Bartolinas positioned themselves as heirs to Sisa’s struggle. Bartolinas members who traveled to rural communities to organize women in the 1980s recalled the hold that Sisa’s story had on campesina women. “Because of this, in some provinces they already considered us the second Bartolinas restarting the struggle,” one leader recalled.

According to the historical analysis of one of the group’s foundational documents, women “were the most utilized” throughout centuries of oppression.

“We find ourselves in the 502nd year of forced colonization,” they stated, “but now we are conscious of our rights.”

The Bartolinas women’s movement works hard to establish themselves as leaders not just among women, but in the wider Indigenous movement where women and men work together to protect their rights. Some Bartolinas described their movement’s vision of gender equality as representative of the Andean concept of chachawarmi, which refers in part to the participation of both men and women in the struggle.

For example, in August of 2020, the Bartolinas coordinated alongside the men’s Túpac Katari Campesino Federation of La Paz in their successful blockade protests against the coup government of Jeanine Añez.

Bartolina leader Juanita Ancieta reflected on the dynamic represented by Katari and Sisa, referencing “ancestral principles” based on “complementarity” between men and women.

“Our ancestors, Túpac Katari and Bartolina Sisa, fought together in the same way,” she explained. “They struggled side by side, seeking total complementarity between men and women, because the struggle is one.”

Such a vision extends into everyday life. As Bartolinas leader Roberta Gutiérrez explained in Una Mirada Desde las Bartolinas, these politics are reflected in the way she raised her two daughters and two sons, teaching them all how to cook, clean, and wash clothes.

“It’s important to treat them all equally,” Gutiérrez wrote. “We need to begin decolonizing ourselves starting at home.”

Dr. Benjamin Dangl is a Lecturer of Public Communication at the University of Vermont. He is a longtime journalist in Latin America and the author of three books on Bolivia, most recently The Five Hundred Year Rebellion: Indigenous Movements and the Decolonization of History in Bolivia, which won a Nautilus Book Award.