Confronting a Century of Global Change in Rural Panama (Review) 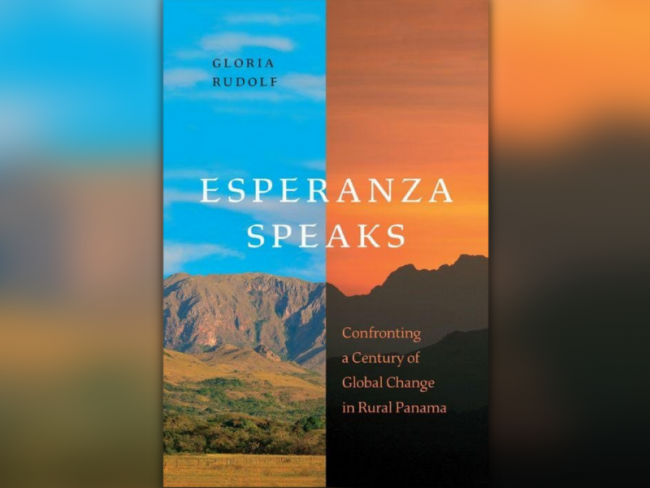 When landing in Panama, foreign visitors are immediately struck by the shiny towers crowded along the capital city’s dense skyline. As hallmarks now rivaling the country’s beaches and wildlife, those metallic metropolitan structures symbolize government-led urbanization on one end of the famed canal. In the last decade, new works in social science literature have studied the vibrant cultural and political worlds that the two port cities, Panamá and Colón, contain beyond the canal and its tense history. However, Panama is more than its port cities, and behind the iconic skyscrapers lie persistent levels of social inequality.

In her book Esperanza Speaks: Confronting a Century of Global Change in Rural Panama, anthropologist Gloria Rudolf presents a long-durée view of histories of political and social change in Panama through an intimate portrait of family and village life in the rural province of Coclé. Her ethnographical study focuses on Esperanza Ruiz and her family in the village of Loma Bonita, located dozens of miles from the canal and its two port cities. In the span of a century, Loma Bonita, a subsistence farming community, has undergone radical changes that reflect the expansion of Panama’s government and cash crop industries. In telling the community’s story, Rudolf offers readers a de-centered view of Panama’s history from the eyes of the countryside’s inhabitants whose lives have become increasingly tied to urban Panama and global economic systems.

During one of Rudolf’s visits to Loma Bonita in the 1970s, one Panamanian asked her, “What do you do with all these words I give you?” The question remains one worth asking. Anthropology’s history in Central America and Panama has often been filled with racialized caricatures and cultural chauvinism on the part of researchers from the United States and Europe touting themselves as adventurous witnesses to a land of tropical mystery and danger. This colonial gaze frequently reduced Panama’s geography and peoples to specimens of social and biological chaos—a dehumanizing pattern that contemporary social scientists must labor to eliminate. In Esperanza Speaks, Rudolf succeeds in this scholarly endeavor, while nonetheless remaining honest and self-reflexive from the start of her book. Often, she sacrifices her voice as a narrator for Esperanza’s and others’ voices to surface in the text. In doing so, the book brings to life the histories of Panamanians, like those in Loma Bonita, allowing us to see the complexities of contemporary rural Central America.

The first pages open with a bus dropping Rudolf off at a village, where she awaits her contacts to introduce her to the local family with whom she would be living in Loma Bonita. Unaccustomed to Panama’s humid heat, Rudolf is earnest in recalling her physical and mental vulnerability in her first days in Loma Bonita. She also experiences intimate moments of exchanging stories and recipes with Esperanza’s family. However, her work does not overly romanticize rural life. Rather than using transactional formal interviews, Rudolf draws on years of listening to life histories from Esperanza and of forging intimate friendships based on mutual respect, trust, and reciprocity. In the process, she learns the extent to which Esperanza’s life is deeply tied to Panama’s larger colonial and modern history, including Spanish, British, and U.S. imperial incursions. Rudolf regards Esperanza as more than a research study informant: she was a friend, a cherished member of her community, and an inheritor of Panama’s national and colonial pasts.

As Rudolf delves into history, she uncovers how Esperanza’s life was shadowed by the growing global capitalist development enveloping Panama in the 20th century. Hemispheric foreign policy and U.S. financial power clearly imprinted the lives of Esperanza, rural Panamanians, and other Latin Americans. Amid a rise in coffee prices following the World War II, Panama’s rural landscape shifted from subsistence farming to coffee production while migrant urban labor exploded. Panama’s national government extended agricultural programs to individuals in places like Coclé to encourage producers to grow coffee. All this, Rudolf explains, received support from the United States and foreign lending powers. Despite the wealth this generated for Panama’s elites, ordinary Panamanians felt increasing inequality, and many young people migrated to Panama’s cities seeking wages.

This post-World War II economy transformed Esperanza’s youth. Prior to the 1940s, subsistence farming and interdependence among village families offered stability to Loma Bonita. But Esperanza witnessed how economic insecurity penetrated Coclé when coffee agriculture arrived, which Rudolf explores in Chapters 2 and 3. With coffee, kin networks eroded, and land inequality increased between families. As a result, Esperanza had to take up jobs as a domestic worker in Panama City. There, she endured more labor abuses and gender inequality than in her childhood home. Yet, she noted that her geographical mobility as a worker and her family home in Coclé’s countryside served as a safety net: “I could always get another job in the city, and I could always quit and go home,” she told Rudolf. Even while roaming the city’s domestic worker economy, Esperanza always saw the village of Loma Bonita as her home and crucial to her identity.

During Panama’s shift to the Partido Revolucionario Democrático’s government in the late 1960s, the changes of Esperanza’s youth intensified. As detailed in Chapters 4 and 5, Loma Bonita’s communities experienced ambivalence toward the regimes of Omar Torrijos and Manuel Noriega—two military leaders who ruled the country from 1968 to 1978 and 1983 to 1989, respectively—because their socioeconomic development initiatives came with militarization in rural Panama. Beginning in the 1970s and continuing well into the 1980s, instability of coffee prices and rising oil prices led to further economic insecurity for Panamanians, urban and rural. Esperanza and her children saw no option but to continue migrating to Panama’s cities for work. In the process, they increasingly felt cultural alienation. Esperanza confessed to Rudolf that in the city she felt others were embarrassed of her: “I know what they’re thinking: Here comes the chola.” Esperanza noted her children were more familiar with the city by this point, but for her, Loma Bonita was where her family and history belonged.

As an elder, Esperanza’s goal to replant her family’s cultural and historical roots in Loma Bonita solidified. However, Coclé and other interior provinces in Panama began to experience the consequences of globalization. By the 2010s, Loma Bonita’s community began to lose land to corporate real estate deals providing property to wealthier Panamanians and foreign tourists. Loma Bonita is not totally unique in this, however. Rudolf notes that the same losses that Esperanza’s family has faced are shared by rural and coastal communities all over Latin America where global tourism and agribusiness industries have exploded. Yet, Esperanza’s family and Loma Bonita persist. Villagers still produce subsistence crops, like yuca, for their own consumption, and they find ways to make small economic gains in selling specialty coffee among themselves. Loma Bonita remains theirs.

In this ethnographical account, Rudolf demonstrates how Panama’s history shapes the most intimate corners of Panamanians’ lives. Although Panama’s government historically expressed anxieties about failing to incorporate its interior provinces into its national project, we can see that both the political feats and violent nightmares of Panama’s national politics and global economy shaped rural Panamanians’ lives. Regional integration was at the expense of rural livelihoods and cultural traditions. Facing the prospect of her son returning to Panama City for work, Esperanza lamented, “I want him to feel he doesn’t have to go to the city to be modern.” As capitalist development models enveloped the region by the late 20th century, rural Panamanians’ alternative practices of modernity, rooted in subsistence farming and kin networks, had to adapt to a global economy.

Furthermore, Rudolf provides us a view of Panama’s local and regional histories that more famous narratives of the canal and U.S. imperialism may bury from view. By examining Panamanian history through Esperanza’s life, stories of capitalist development, labor precarity, and local kinships surface. On the day that control over the canal returned to Panama in 1999 after nearly a century of U.S. domination, almost no one in Esperanza’s family was listening to the historic event on the radio: everyone was busy working, Rudolf remarked. Longer histories of popular religion, agrarian economies, and gender inequality are more palpable when we look at Panama through Esperanza’s perspective.

Gloria Rudolf’s Esperanza Speaks is a clear, accessible, but also poignant portrait of rural Panama. Students and instructors will benefit most from its clear prose. Rudolf’s short side blurbs that include brief overviews of Panama’s macro-history make the book accessible to students unfamiliar with Latin America. More seasoned researchers of Central America, Panama, and agrarian history will also find that Esperanza Speaks challenges our ideas of development in Panamanian history, who its main protagonists were, what transformations unfurled, and what memories endured.

Marianne Quijano is a PhD student in History at the University of Florida. Her research examines histories of religion, science, and race in twentieth-century Panama and Central America.