More Than Six Decades of Sanctions on Cuba

The Biden administration’s renewal of sanctions against Cuba reveals the folly of a long failed policy. 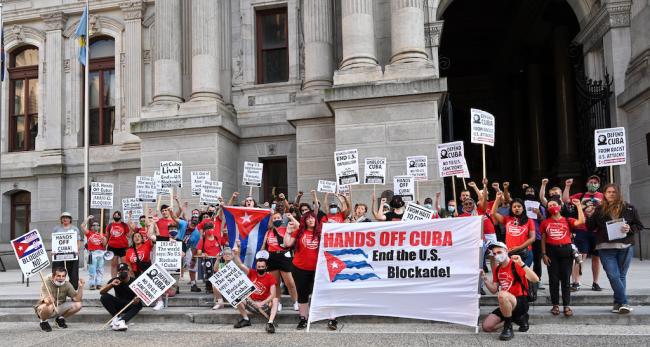 This past September President Joe Biden renewed the U.S. trade embargo against Cuba, thereby extending into the 62nd year the regimen of punitive sanctions. The policy, as Assistant Secretary of State Roberta Jacobson acknowledged in 2015, is “harsher than on many other countries in the world over the years.” Cuba has been under U.S. sanctions for more than half of its existence as an independent nation. Set loose in 1960, the policy was thereupon left to drift pointlessly in a recurring loop of history through thirteen presidential administrations, bereft of plausible purpose and barren of results other than adding to the circumstances of privation under which the Cuban people confront daily life.

Conditions of want and need, however, should not be viewed as the unintended collateral consequences of sanctions. On the contrary: conditions of want and need are the purpose of sanctions. The policy is informed by a cynical logic to induce suffering and inflict hardship as a means to deepen Cuban discontent, whereupon–presumably–Cubans driven by want and motivated by need would rise up to remove a government the United States wishes gone. The “only foreseeable means of alienating internal support,” the Department of State insisted as early as April 1960, “is through disenchantment and disaffection based on economic dissatisfaction and hardship… Every possible means should be undertaken promptly to weaken the economic life of Cuba [and]… to bring about hunger, desperation and overthrow of government.” A simple cause-and-effect calculus, President Dwight Eisenhower reasoned: “If they [the Cuban people] are hungry they will throw Castro out.” Regime change would come from within and bottom-up, seemingly—as the State Department exulted—the “result of internal stresses and in response to forces largely, if not wholly, unattributable to the U.S.”

Punitive sanctions designed to do harm to the Cuban people as a means of regime change were subsequently recast as a policy of righteous purpose and noble intent on behalf of the best interests of the Cuban people. To support, as President Joe Biden pronounced in 2022, the “Cubans’ aspirations for freedom…  and to allow the Cuban people to determine their own futures.”  The United States taking it upon itself, in other words, to punish the Cuban people for their own good.

The degree to which U.S. sanctions have contributed–or not–to Cuban want and need is, of course, debatable. That sanctions are intended to promote want and need is not. Therein lies the tragic irony of 60 years of sanctions. Conditions of want and need are rarely circumstances conducive to reasoned political deliberations. A policy informed with malicious intent, designed purposely to foster deprivation and foment destitution, does not readily allow Cubans to envision the future in any form other than as an outlook of urgent immediacy. A people preoccupied with matters of subsistence as the overriding reality of daily life, obliged to deploy vast amounts of time and energy in pursuit of even the most minimum needs of everyday life, are unlikely to engage in deliberations on forms of democratic processes. A survey in 2008 published in the New York Times reported that more than half the Cubans interviewed considered economic needs to be their principal concern. Less than 10 percent identified political freedom as the main problem confronting the island. As a Cuban colleague once suggested to me: “First necessities, later democracy.”

Sanctions have indeed contributed to Cuban hardship and added to Cuban discontent. But the desired discontent has resulted less in expressions of organized disaffection than recurring cycles of mass emigration. The irony is not lost on informed observers. Those sectors of the population most likely to constitute themselves as a political opposition are often the very people most inclined to emigrate for reasons of personal hardship. Ironic too that at a time of the national mood turning dark about immigration from Latin America, U.S. policy serves to add to the woes of a people for whom emigration to the United States offers the most immediate remedy to hardship. An estimated 180,000 Cubans have sought asylum in 2022, many of whom have joined the swelling numbers assembling at the U.S.-Mexican border.

However, the authenticity of protest as a means through which to express discontent cannot be dismissed peremptorily as a deed of foreign mischief. Surely all is not well in Cuba. That much of what is not well in Cuba can be attributed to U.S. sanctions can hardly be gainsaid. But much of what is not well in Cuba can also be attributed to official policies and practices. The Cuban people bear a compelling and legitimate right collectively to articulate grievances, to register dissatisfaction and express discontent with ill-conceived economic policies that fail to remedy want and need, to protest the abridgement of civil liberties and the violation of human rights: in sum, to hold the government accountable for proper governance. To recognize the baneful consequences of U.S. sanctions is not to disregard or otherwise dismiss the failures of the Cuban government. Governmental policies and practices have indeed more than adequately contributed to the hardships borne by the Cuban people.

The protests of July 2021 responded to a vertiginous spiraling of shortages and scarcities in the face of a government seemingly without the policy capacity to relieve the pressing needs of daily life. Similarly, protests in October 2022 responded to dire conditions in the wake of Hurricane Ian. The hurricane served to reveal the utter fragility of an aging infrastructure. Existing chronic shortages of food, fuel, and medicine were exacerbated by flooding, loss of agriculture and livestock, and days of island-wide blackouts coming at a time of a protracted sweltering summer heat. All in all, these constituted conditions of sufficient urgency to prompt the Cuban government to request U.S. aid, to which the Biden administration acknowledged was the subject of “ongoing conversations” to assess “the humanitarian needs of the Cuban people.”  On October 18, the Department of State offered Cuba $2 million in the form of “critical humanitarian aid” and promised to “continue to monitor and assess humanitarian needs [and] continue to seek ways to provide meaningful support to the Cuban people.”

The irony of the scene is palpable: Hurricane Ian contributing further to circumstances of Cuban want and need, a people prostrate soliciting U.S. humanitarian aid to relieve the very conditions to which sanctions have been dedicated to creating. The cynicism of the punitive intent of sanctions stands in sharp relief: humanitarian support to aid Cubans in want and need caused by the hurricane while continuing to induce want and need as the purpose of U.S. policy. In the end, perhaps the most egregious failure of sanctions lies in its ignorance of Cuban history. Cubans have long acted in discharge of agency as protagonists in their own history. They have repeatedly prevailed over misgovernment and maladministration. They have managed their own history without outside political interference. In fact, sanctions serve to compromise Cuban agency. They act to encumber and indeed often burden Cuban capacities to act in function of credible purpose on behalf of legitimate political change. A policy claiming to assist Cubans to “determine their own futures” contributes to a history without exit, to render that future as a time continually beyond reach, of providing neither remedy nor resolution and to holding a people captive to abeyance.

On the other hand, it is possible to imagine that the policy of sanctions has very little to do with Cuba. That sanctions are in fact all about the 29 electoral votes of Florida. In this instance, sanctions on Cuba are less about regime change in Cuba than a means of regime change in the United States.

Louis A. Pérez, Jr. is the J. Carlyle Sitterson Professor of History and Director of the Institute for the Study of the Americas at the University of North Carolina at Chapel Hill.  His most recent book is Rice in the Time of Sugar: The Political Economy of Food in Cuba (2019).