Anadelia A. Romo’s book analyzes the visual and symbolic reinvention of Salvador, exposing how tourism, the arts, and the elite emphasized Blackness as a unique element of Bahian identity for profit. 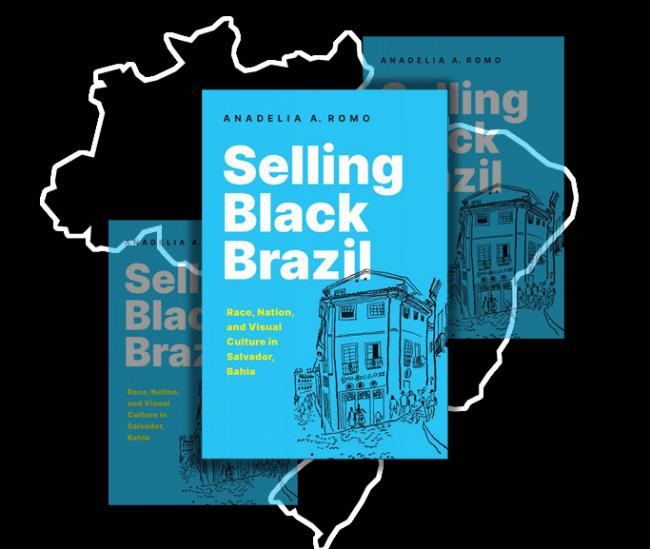 At the beginning of the 20th century, Salvador, capital of the Brazilian state of Bahia and the former center of the Portuguese colonial project in the Americas, reinvented its image. In the post-abolition period and the beginning of the republic (1889), Salvador was widely caricatured in Brazilian newspapers as an “old Black woman” because its population was made up predominantly of African descendants. That image deeply disturbed white elites guided by scientific racism and the idea of ​​progress. These elites wanted to look modern and white.

According to scholar Barbara Weinstein, who studies race, gender, and regionalism in the formation of national identities in Brazil, while São Paulo pushed for whitening and modernization at the turn of the 20th century, Salvador opted for a change of route. Between the 1930s and 1950s, Salvador began to adopt the image of the "black heart" of Brazil. The old, racialized characterization of the city was re-elaborated. Amid debates about regionalism and racial harmony, the racialized imaginary of the city became a symbol of pride and peculiarity. The old Black woman gave way to the bodies of young Black men carefully drawn by the light and shadow of Pierre Verger's photographs or by the colorful strokes of Carybe's paints, vaunted by Jorge Amado's complimentary writing. Now, there was magic in the city’s beauty, in being Black and embracing Candomblé, an Afro-Brazilian syncretic religion that developed during the trans-Atlantic slave trade. This radical change in the imagery and cultural profile of the city of Salvador also had symbolic implications for the Black Atlantic. Bahia came to occupy a central place in the diasporic political imagination, alongside Cuba, Jamaica, and Haiti.

The Brazilian strategy toward race fostered the mythical imagery of “racial democracy,” the (false) idea that racism did not exist in Brazil due to intense racial mixing and inclusion. The Bahian elites, in interacting with popular sectors, positioned Salvador at the center of this myth. Moreover, they established the city as a reference point for diasporic Blackness. This transformation of the visual and symbolic profile of Bahia and its capital is the theme of Anadelia A. Romo's book, Selling Black Bahia: Race, Nation and Visual Culture in Salvador, Bahia.

As the author shows, the reinvention of Salvador’s cultural image was not a simple and conflict-free operation. Spanning three decades, it took place in the context of industrialization in Brazil, amid the decline of Bahian agricultural production, and the development of the country’s tourism market. The reinvention involved the work of various intellectuals, members of the economic elite, politicians, and popular sectors linked to Candomblé.

This book is the story of how the white Brazilian elite realized that it could profit from tourism by emphasizing Blackness as a unique element of Bahian identity. In Brazil, this uniqueness has come to be called Baianidade. Romo argues that the construction of Bahia as a culturally “magical” place resulted from the production of an identity that sought to accommodate Blackness in terms of culture while maintaining a gap in economic relations. To an extent, the production of the culture and symbology of the state was handed over to Black people. However, Black men and women continued to be relegated to precarious work conditions, and the abysmal income inequality between Black and white people was reproduced.

Still, Bahian white elites and Candomblé leaders shaped Bahian identity as a Black experience. That action produced three effects. First, Black people began to have a symbolic place in the modernization project—for example, the circulation of postcards showing Black people to represent Salvador and the celebration of Black popular music as Brazilian music—but did not economically benefit from those changes. Second, the commemorative Blackness industry attracted white tourism, bringing in more money, but further whitening the city. Finally, Bahian white elites came to occupy a particular place of cultural mediation in Brazil.

Through in-depth research on the images and narratives produced to publicize the city, Romo traced the negotiation process between Bahian elites and Candomblé leaders, or terreiros. This process led to the elaboration of a robust image-centric culture for Salvador.

In addition to analyzing the work of seminal artists such as Jorge Amado, Caybé, and Pierre Verger, Romo sheds light on other Bahian and non-Bahian artists who built Bahia's visual culture. Visual artists such as Manuel Martins, Lênio Braga, Clovis Graciano, Luís Jardim, Castello Branco, Carlos Thiré, Lygia Sampaio, and Carlos Bastos were instrumental in crystallizing the racialized image of Salvador. Looking beyond the productions of prominent intellectuals and artists in Bahian culture, Romo also examines other artifacts like tour guide materials to reveal intentions and characteristics not seen in the more well-known areas of production by these artists and intellectuals. For example, specific attention is paid to the role of the brothers Odorico and Claudio Tavares in creating the image of Salvador and Bahia. The Tavares brothers wrote texts selling Bahian Blackness to Brazil and the world, using public resources to finance intellectuals studying Bahian peculiarity.

The book fails to mention the mediating role played by the Center for Afro-Oriental Studies (CEAO) in Bahia in the late 1950s. Under the leadership of the Portuguese Agostinho Silva, the Universidade Federal da Bahia created the CEAO in 1959. The early foundation of CEAO made the center a pioneer in African studies and a key institutional support for Afro-Bahian culture. In addition, it was a space where intellectuals and Candomblé leaders in Salvador socialized together. For example, CEAO was one of the spaces where scholars and journalists came into contact with Dona Olga de Alaketu, a Candomblé high priestess from the Oiá-Fumin terreiro. Romo’s work might have benefited from including an analysis of the relationship between the CEAO, the terreiros, and the Bahian intellectual elite. Including this would have reinforced the idea that "Black Salvador" was not simply imposed by the elite, but the state-mediated project was a subject of debate between popular sectors and white elites.

Another point that would strengthen the text is a deeper analysis of the difference in engagement between the Candomblé terreiros and the capoeira groups in this project of selling Blackness. Romo argues that different popular sectors had varying levels of involvement in the rebranding of Black Bahia. The focus of her argument is to reinforce the prominence of Candomblé, with little analysis of the influence of capoeira, an African-based form of martial defense and dance. Candomblé had greater influence because of its connection to the elite who were shaping the rebranding. For example, Mães de Santos (Mothers of Saints)—like Dona Olga de Alaketu—frequently attended the CEAO, dialoguing with the Brazilian intelligentsia to acquire prestige and negotiate their space in the Bahia Negra tourist project. Capoeira, on the other hand, was less organized and so was not as prominent in shaping the image of Black Bahia. Thus the image of Bahia Negra was based mainly on a Black female culture, with an appeal to the supernatural, or religious, as opposed to the earthly, physical, martial, and masculine world of capoeira.

Overall, the book is a fundamental critique of the utilization of Blackness in Bahia. A quick look at the tourism policy of the city of Salvador and the data on urban violence is enough to convince you that Romo is right. Bahia is the Brazilian state that most celebrates Blackness, but also one of the states that kills the highest number of Black Brazilians. The annual report made by Rede de Observatórios da Segurança (Security Observatories Network) shows that 96.9 percent of people murdered by the Military Police of Bahia in 2019 were Black people and 474 of the 489 identified victims of police intervention were Black or parda (Brown) people. The book exposes how tourism, the arts, and elite politicians think about Blackness, and by extension how limited this mode of thinking is. Romo shows how elites can move to capture cultural policies and instrumentalize them according to their interests. Unfortunately, Bahian exceptionalism often prevents us from understanding that the Bahia Negra project functioned as a policy of repositioning a local white elite on the national modernization project. Cultural policies in the symbolic or representative field are not enough if they do not involve substantial economic and social gains, and transformation for the people whose images are being marketed and sold.

Caio Fernandes Barbosa has a Ph.D in History from the Federal University of Bahia and is a teacher at the Bahia State Department of Education. Twitter: @Caiobarbo