A new documentary highlights the many difficulties facing an emerging generation of young farmers in Puerto Rico. 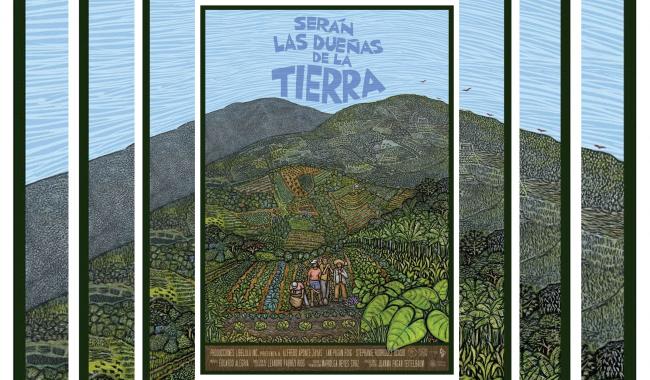 When you consider Puerto Rico’s fertile land and tropical climate, it’s tempting to assume that conditions are ideal for farming—they’re not. This unfortunate reality becomes increasingly apparent in the new documentary, Serán las dueñas de la tierra (English title: Stewards of the Land), which follows the struggles of three young farmers. The film also marks the debut for director Juan Manuel Pagán Teitelbaum, who produced the feature-length documentary alongside his partner, Mariolga Reyes Cruz.

Pagán’s involvement in Puerto Rico’s relatively nascent agriculture movement dates back to his return to the island. After completing graduate studies at SUNY Buffalo in 2008, he spent a few years living on a family farm in Utuado, where he began producing short videos on farming. Eventually, the U.S. Department of Agriculture provided funding for 10 short films on basic farming techniques. From there, WIPR, the island’s public television station, became interested in the project and commissioned Pagán and his wife to produce a series of 20 short educational films called Cosecha Hoy. This was a turning point, according to Pagán: “If you spoke to people working in agriculture, they would tell you there was a before and after, simply because [the series] gave visibility to a group of young farmers working in agriculture.”

Those videos were meant to be inspirational, he added. And to the extent that farm income, the amount of cuerdas of land under cultivation, and farming jobs all increased in the previous decade, inspiration abounds.

His next project, however, would seek to balance perspectives by addressing the food system in Puerto Rico, where over 80 percent of the food is imported and a third of residents suffer food insecurity. In conveying this stark reality, the film intentionally adopts a direct cinema style over the course of three years “to let things happen and film them,” explains Pagán.

A long overhead shot of the verdant countryside opens the film before we are introduced to Stephanie Rodríguez, a public school teacher who gives classes on agriculture, in addition to working on two farms in Ciales and Orocovis. The camera lingers on various scenes from Rodriguez’s strenuous daily routine as she narrates her experience.

At one point, she mentions an opportunity to take over a family farm. Though it will become more obvious later in the film, this is a much cheaper and more desirable arrangement than if she were to rent land from Puerto Rico’s Land Authority, the bureaucratic government entity charged with administering the majority of the island’s publicly owned land for agricultural use or other purposes.

Bureaucracy aside, there is also the actual labor required to reclaim abandoned farmland: roads to be built, irrigation systems to install, secondary forests to be cleared. On top of that, Rodriguez takes on the responsibility of advocating for consumers to consciously support local growers. Not shown in the film is how this role also extends to social media, where Rodríguez has developed a sizable following as an influencer focusing on agriculture.

Next, we meet Alfredo Aponte Zayas, who is returning to Puerto Rico with his family after completing his graduate studies in the United States. Aponte first appears in snowy North Dakota via cell phone footage before an emotional reunion with family members at the airport in San Juan. Symbolically, it is very meaningful to see a young Puerto Rican family return home at a time when hundreds of thousands have been forced to leave, especially with the explicit purpose of returning to the land. Later in the film, during a class, one young woman explains that there is an opportunity to build a new society through this movement, with food sovereignty and agroecology at the forefront.

It takes Aponte nearly a year just to lease his farm, which he says he could not do while living stateside. As he navigates the Kafkaesque bureaucracy of Puerto Rico’s Land Authority, it quickly becomes apparent that collecting rent is more of a priority than allowing farmers the time and resources they need to prepare land that is typically far from ready for cultivation. Even the representative for the Land Authority admits as much, while extolling the virtues of the plot of land Aponte has just leased. Needless to say, it is a bad omen. As Alberto’s savings dwindle, the difficulties mount, including lack of funding, expensive rent for homes close to farmland, the burden of loan repayments, the potential theft of invaluable farm equipment, and the inability to sustain his growing family.

“What these young farmers are going through is so immense…these are the young superstars who want to build up the country,” says Pagán. And it’s not just farmers, he adds, but also teachers, artists, really anyone who is committed to improving material conditions on the island. “Look at how we’re treating them as a society.”

Farmers, however, share a particular historical burden that Ian Carlo Pagán Roig, the film’s third protagonist, succinctly describes during a lecture to his students. As the great-grandson of farmers in Toa Alta, he is a product of the ongoing displacement that farmers have faced for over a century, beginning with the export of farm labor at the turn of the 20th century and accelerating with the mid-century industrialization of Operation Bootstrap. Throw in the recurrent threat of natural disaster and the pernicious effects of U.S. imperialism, and it’s easy to see how the Puerto Rican campesino or jíbaro—traditional patriotic symbol of rural identity in Puerto Rico—has become stuck in the past as a romanticized, but forgotten notion.

The film is able to convey many of these historical and political factors without a surplus of context. It is simply a lived reality for each of the protagonists and a testament to their decision to pursue agriculture. “You don’t have to talk about politics in a film where you have people going against the grain,” says Pagán, “because almost no one decides to study farming in order to be a farmer in the mountains.”

Through archival footage, we are able to see what makes Pagán Roig’s trajectory unique: how a natural inclination towards agriculture evolved from a passionate hobby to an academic track and eventually, to a school that teaches agroecology. Perhaps the most hopeful scene takes place inside a classroom, where a multigenerational group of students share their personal reasons for enrolling in a course on agroecology. Some have inherited land from a relative, while others hope to apply sustainable practices to agricultural projects in different parts of the island. In the end, sustainability is key to this movement—not just in terms of the land, but also the people. Eschewing resilience as a trope, Serán las dueñas de la tierra approaches its subject matter with dignified candor in the face of impossible circumstances.

“How do we make people conscious that there is a generation of young people that want to farm but who don’t have access to capital or land? That’s one of the things that we wanted to do with this film,” says Pagán. “And I think the problems these young people face aren't exclusive to just Puerto Rico,” he adds.

The documentary had its world premiere during the Philadelphia Latino Film Festival (PHLAFF), a multidisciplinary platform that has featured the innovative and community-driven work of Puerto Rican filmmakers. Pagán explains that they liked the idea of premiering the film for a diasporic audience.

“It’s a film that we want to reach the diaspora,” says Pagán, who hopes the film can help connect people. “There are a lot of people in the U.S. who maybe still own land in Puerto Rico and that they know there are young people who want to farm and if they wanted to make that land available, they would find farmers.”

As for Pagán, after the arduous process of completing his first film, he looks forward to—what else—returning to the land.

Serán las dueñas de la tierra will be in select theaters in Puerto Rico on July 14.

Néstor David Pastor is a writer, editor, and translator born and raised in Queens, NY. He is the co-founder of huellas, a digital magazine of longform writing by emerging writers with roots in Abya Yala, and editor of Intervenxions, a digital publication of the Latinx Project at NYU that focuses on Latinx arts, culture, and politics. For more information, visit www.ndpastor.com