For one activist, Chile’s proposed constitution missed a historic opportunity to defend migrant rights amid a right-wing backlash that ultimately defeated the new progressive charter. 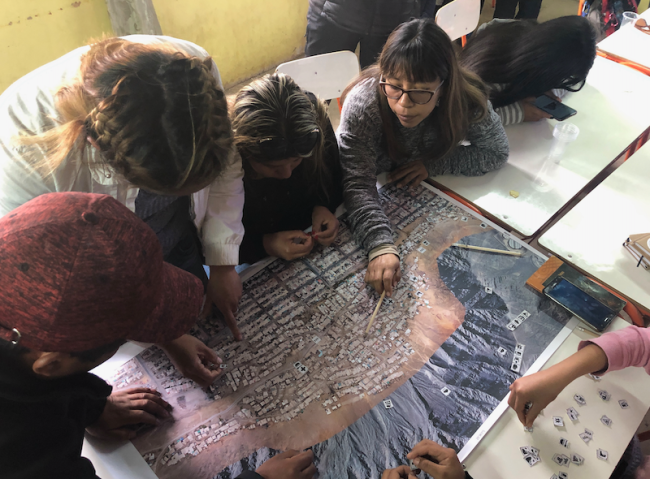 On July 4, Chile awarded its prestigious 2022 National Prize in Human Rights to Elizabeth Andrade Huaringa, a Peruvian Afrodescendant mestiza migrant woman and grassroots community leader. The first migrant in history to receive the prize, Andrade will get a life-long pension as well as a lump sum payment for a community-based project. She also joins a lineage of iconic human rights activists in Chile who are among the previous recipients. The prize is a testament to the visibility Andrade has brought to the fatal combinations of urban exclusion, sexual and gender-based violence, and state-sponsored racial violence that target migrant women in Chile.

Andrade lives in one of 60 precarious, self-built migrant settlements, or campamentos, on the arid hillsides surrounding the northern border city of Antofagasta. Between 2014 and 2015, tens of thousands of people escaped discriminatory rental homes in the city center and collectively seized government lands where they built these settlements. The residents are predominantly Black migrants from Colombia’s Cauca Valley and Indigenous migrants from the Peruvian, Bolivian, and Ecuadorian Andes who had recently migrated to Antofagasta.

Like many other migrant women in Antofagasta, Andrade and her then-teenage daughter settled in the campamento where they currently live after suffering domestic violence in their rental home. Local and national news reports about these informal settlements consistently emphasize poverty and crime. And yet Andrade found an emerging citywide network of over 1,000 predominantly migrant community leaders, almost all of them women, who were mutually supporting each other to overcome shared conditions of vulnerability. 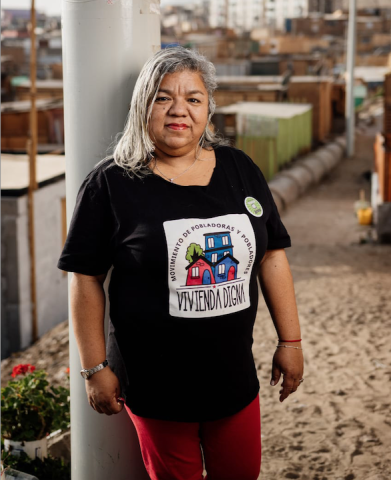 “I came to the campamento with all the stigmas about migrants that I heard in the city,” Andrade told the Chilean news outlet The Clinic. In fact, she told me that she initially became a community leader precisely because she thought that “if I begin leading this campamento, they [other, specifically Black migrants] will not attack me, will not rob me, won’t do anything to me.” Seven years into her leadership position, Andrade claims that she “feels like a reconstituted woman.” Whereas in 2015, “I wasn’t even able to defy [my ex-husband], now I can stand up to anyone.”

In June 2022, leaked private messages showed Antofagasta’s populist, anti-migrant mayor was planning a false flag operation to kill Andrade, who he misogynistically dubbed “la vieja.” Rather than feel intimidated, she immediately sued him. “Why would he intimidate me?” she asked. “Rather, I intimidate him, because my struggle scares him: because he knows that I will lead the entire campamento to City Hall, when the moment comes, to demand a meeting.”

Andrade and her fellow woman community leaders are currently gearing up for negotiations with regional and city authorities to urbanize their campamento, Los Arenales—the largest of Antofagasta’s informal neighborhoods. Their calls for urbanization directly counter longstanding state plans to “eradicate” all of Antofagasta’s migrant settlements. If that were to happen, authorities would only resettle those with permanent residence and “vulnerability” scores low enough to qualify them for subsidized housing.

In 2016, Andrade cofounded Rompiendo Barreras, an autonomous community-based organization that governs the 2,700 families currently living in Los Arenales, 80 percent of whom are migrants. Since then, the campamento has gained citywide, national, and international renown for its defense of migrant rights. Rompiendo Barreras’ first projects involved challenging discriminatory regulations that prohibited public services in unauthorized settlements. It succeeded in installing electricity and water connections and building self-financed childcare and bakery cooperatives through a combination of direct action and innovative partnerships with private companies, NGOs, and regional state service providers. In 2018, the South Africa-based urban poor social movement Slum Dwellers’ International awarded Rompiendo Barreras a grant to develop a proposal to urbanize Los Arenales.

This work has led Andrade to travel throughout Chile and to Argentina, Peru, and Puerto Rico, where she has built lasting activist networks. She was a founding member of the Red Nacional de Organizaciones Migrantes y Promigrantes de Chile, one of two major nationwide migrant rights organizations in the country today. She also founded a local chapter of a large urban poor movement in Chile, the Movimiento de Pobladores y Pobladoras Vivienda Digna. 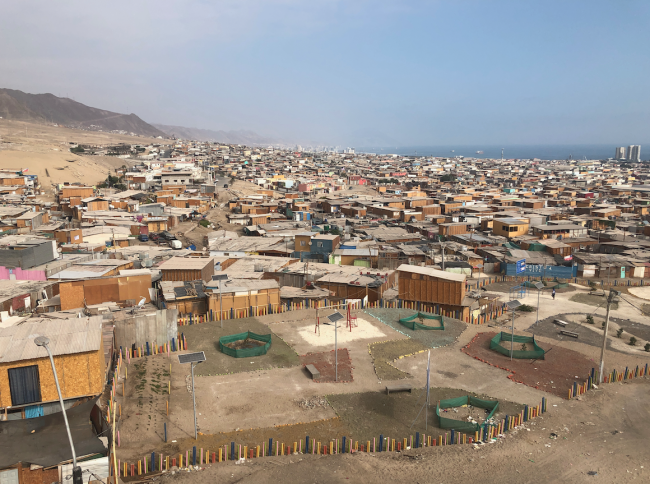 Two months before Andrade received the National Prize in Human Rights, Los Arenales was one of the few destinations in Antofagasta to receive an official visit from a delegation of the Constitutional Convention. While meeting with pobladores in the campamento, representatives who were tasked with writing a new constitution discussed rights that were then under consideration for inclusion in their proposal, including rights to plurinationality and interculturality, housing, and the city.

In the end, many of these new rights, absent from Chile’s 1980 Constitution, were included in the final draft. The proposed constitution was heralded globally for its daringly progressive contents, ranging from gender parity to abortion rights, environmental protections, and Indigenous rights, among others. But on September 4, the draft was voted down by more than 60 percent of Chilean voters. Some pundits have argued that it was precisely the progressive proposals that were to blame for the surprising failure. The constitution’s progressive stamp, this analysis claims, alienated many of the same citizens who had overwhelmingly voted to write it only two years earlier.

Be that as it may, the proposed constitution actually failed to include a range of rights for which migrant organizations had tirelessly lobbied. Paradoxically, according to Andrade, this was due to the Convention’s fear that including migrant rights could alienate the Chilean public.

The draft included language guaranteeing fundamental rights to all “persons,” including the right to enter and leave the country and the right to vote after five years of residency, without distinguishing between nationals and foreigners. It eliminated a controversial line in the 1980 Constitution that denied citizenship to children born in Chile to “transient foreigners,” while also retaining specific provisions guaranteeing permanent residents’ right to citizenship and nationality. Moreover, it incorporated the right to asylum and non-refoulement, two rights that are notably lacking in the 1980 Constitution. Finally, it prohibited discrimination based on “nationality,” “statelessness,” and “migratory situation or refugee status.” These were all significant accomplishments considering that, unlike the 1980 Constitution, which was written during the Pinochet dictatorship, the proposed constitution was drafted in a context of growing immigration and anti-migrant backlash.

Yet overall, the Convention ended up disregarding or rejecting many of the constitutional norms upholding migrant rights that had been proposed by civil society organizations and left-wing representatives in late 2021 and early 2022. Crucially, in April 2022, right-wing and center-left representatives rejected an article guaranteeing the right to migrate, arguing that it would encourage unauthorized migration. This article, similar to one included in Ecuador’s 2008 Constitution, had three key features. First, it established that people have the right to migrate freely from one country to another and to not be identified as “illegal” for their migratory status. Second, it maintained that the state has an obligation to protect the human rights of migrants. Finally, it classified as illegal the collective deportation of migrants. More broadly, by failing to explicitly name “migrants” even once in the draft constitution, the Convention fell short of pre-empting the Chilean political Right’s continued attempts to exploit ambiguous language to limit migrants’ constitutional rights.

In addition to rejecting the right to migrate, the Convention disregarded related norms that proposed a more expansive conception of citizenship. Such a definition would explicitly decouple citizenship from nationality or permanent residence, thus including migrants as citizens regardless of their legal status. Also excluded from the draft were proposals to create migration service offices geared toward protecting migrant rights and a new legal protection system that would guard against state abuses and be accessible to foreigners and nationals alike.

After actively participating in migrant rights organizations pressuring and lobbying the Constitutional Convention, Andrade was left ambivalent about its results.

Before the September 4 vote, Andrade said that she and her neighbors were convinced that they had to vote to approve the constitution, “because it includes the right to the city and to dignified and adequate housing.” But she felt frustrated that those rights were only “for Chilean citizens, not the citizens of the world.” For her, the rights to asylum and non-refoulement were not enough. According to Andrade, the proposed constitution would not have given “[migrant] citizens the opportunity to stay, live, and have the same benefits” as Chilean citizens.

In Andrade’s view, the proposed constitution ended up excluding migrants because it was written precisely in the context of an intense anti-migrant backlash that has consumed Chilean politics and media for the last five years, especially since 2020. In April 2021, President Sebastián Piñera enacted a draconian Migration Law. This context is what motivated migrant organizations to participate in the constitutional process in the first place. “To validate the issue of migration as migrants within the constitution was very relevant, because it would have invalidated or made obsolete the new Migration Law,” Andrade said.

In an effort to regain popularity and legitimacy in the aftermath of the 2019 social uprising, Piñera’s government deployed a systematic media campaign that linked an uptick in unauthorized border crossings to widespread perceptions of crime and disorder. Clamping down on unauthorized migration to address crime allowed the Right to represent itself as the “law and order” party against an excessively permissive Left.

This strategy nearly resulted in a surprise victory for pro-Pinochet candidate José Antonio Kast in Chile’s 2021 presidential election. Kast’s popularity was attributed to his anti-immigrant policy proposals, which included the construction of trenches, surveillance towers, and drone systems to deter border crossers. He also advocated for the establishment of “Temporary Stations for Illegal Immigrants” expressly for the purpose of deportation, and the creation of “Migratory Cordons” to control the movement of unauthorized migrants on the northern frontier’s highways.

Thus, the very conditions that motivated the participation of migrants in the Constitutional Convention also made their demands politically impossible. As Andrade recalls, representatives told her and other activists that, in the Convention, “the majority of them would always ask, ‘Why does everyone need to be included if this is a Constitution for Chile, for Chileans?’”

Pablo Seward Delaporte is a PhD candidate in the Department of Anthropology at Stanford University. He studies the relations between space, subjectivity, and the politics and ethics of care that emerge around forms of environmental and social vulnerability in contexts of migration. His dissertation research focuses on Antofagasta’s migrant campamentos.