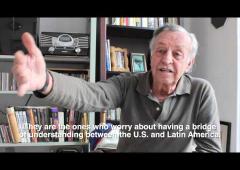 Tonight is NACLA's 45th Anniversary Gala. Among the honorees are Noam Chomsky, Javier Sicilia, and Mexican political cartoonist Eduardo del Río "Rius." Because Rius will be unable to join us at tonight’s event, we filmed his acceptance speech recently at his home in Mexico. He is the 2012 recipient of NACLA's "La Conciencia del Pueblo" Award.