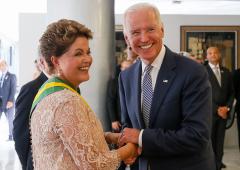 The United States and Brazil: On Reaping What You Sow

A half century since the U.S.-backed coup, Washington continues to interfere in Brazil’s domestic politics.

In Bed with the Bully—Consensual U.S. Surveillance in Mexico

November 7, 2013
The revelations leaked by Edward Snowden that the NSA committed acts of espionage against top Mexican officials and the president himself have so far provoked only mild indignation from the Mexican political class. The lackluster reaction from Los Pinos to the NSA revelations is reflective of the extent to which Mexican elite politicians acquiesce in the intrusions, largely because they themselves use domestic spying to further their own sectional interests in a country in which, little more than a decade after the ‘transition to democracy,’ the majority of the population are excluded from meaningful political participation.

NACLA Radio’s Alex Hall spoke with John Coatsworth, Latin American Historian and Provost of Columbia University, about Edward Snowden's political asylum request to Ecuador. Listen to his analysis of the political and economic implications President Rafael Correa’s decision could have in regard to relations with the United States.

A Guide to Basics