Steve Bannon and other allies of the former U.S. president have falsely claimed that the Brazilian elections were fraudulent. 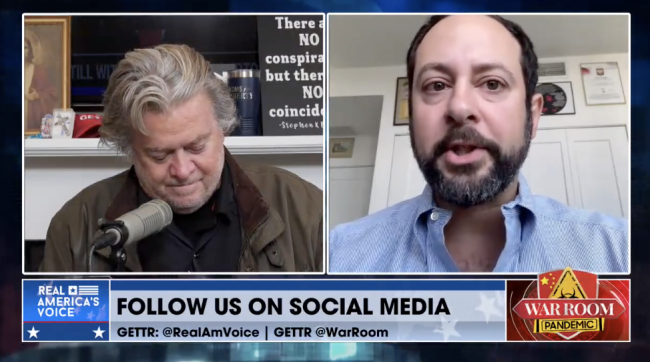 The first round of the Brazilian presidential elections took place on Sunday, October 2 without any complications or any credible reports of electoral fraud, the Brazilian Superior Electoral Court (TSE) has announced. With 48.43 and 43.20 percent of the vote respectively, Luiz Inácio Lula da Silva, from the Workers’ Party (PT), and Jair Bolsonaro, from the Liberal Party (PL), have progressed to a second round runoff, the outcome of which will be decided on October 30. Despite the TSE’s announcement, for ideologues from the U.S. far-right, the election results seemed “strange.”

On the day after the elections, Steve Bannon, the former strategist for Donald Trump and friend of the Bolsonaro family, and Matthew Tyrmand, a board member for Project Veritas—a conservative organization that uses hidden cameras to intimidate and expose journalists—raised suspicions about the results of the Brazilian elections on the War Room podcast, created by Bannon.

“There was fraud there, there was definitely fraud there,” Tyrmand said. He based his argument on the fact that the initial partial results to come out suggested a lead for Jair Bolsonaro. [Editor's note: early returns did not account for results in Brazil's Northeast, a PT stronghold]. He also pointed to the good performance of Bolsonaro’s party in the elections for the Brazilian Senate, where it became the largest party, as evidence that votes in favor of Bolsonaro in the presidential race had been stolen as the results rolled in. 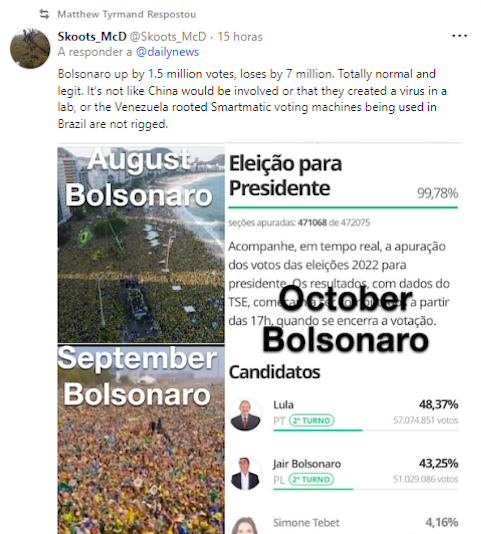 Tyrmand also said that he had already predicted the results of the election: Bolsonaro’s strength would be such that the Brazilian institutions would not be able to annul his victory in the first round, so it would be necessary to extend the race in order to elect Lula. “This is what I’ve said for the last two, three, four weeks, that it was going to come down to the first round and how they were going to tighten it up to get to a second round. They weren’t going to do anything over the top in the first round,” Tyrmand said.

Bannon added that it would be “mathematically impossible” for Bolsonaro to lose, having had so many senators from his party elected. “There’s a lot at stake and that’s why we’re covering this so closely,” he concluded.

Another guest on the podcast invited to give their take on Brazil’s elections was Darren Beattie, a former speechwriter in Donald Trump’s White House. Beattie underlined the importance of the Brazilian elections, that would pit Bolsonaro, “a representative of exactly the type of nationalism that we want and support,” against Lula, who represented “the most destructive and corrosive form” of communism, Beattie claimed.

An investigation by Agência Pública previously revealed that Beattie is part of a network of contacts between the U.S. far-right and Eduardo Bolsonaro, the Brazilian president’s son and a federal congressman.

Agência Pública has followed the War Room podcast for one year in order to understand what Bannon and his guests say about Brazil and discovered that the Brazilian elections are viewed as being of crucial importance to the U.S. and global right. Brazil is mentioned in at least 96 of the 923 episodes analyzed by Agência Pública. In the podcast, Bannon and his guest also refer to Latin America as the United State’s “backyard.”

Over the course of the Monday following the elections, Bannon and Tyrmand also made statements on Gettr, a social media platform that is constantly praised on Bannon’s show. “Game day in Brazil as Bolsonaro attempts to save the nation from the [Chinese Communist Party]-owned  Lula,” Bannon wrote. Tyrmand, meanwhile, shared videos of his appearance on Bannon’s show and also reposted posts from other users who raised suspicions of electoral fraud.

Gettr was founded by Jason Miller, a former spokesman for Donald Trump. Miller also displayed his support for the Brazilian president on the day of the election by posting a number of photos with members of the Bolsonaro family, whom he described as his “friends.” He also shared a screenshot of the partial voting results that showed Boslonaro ahead of Lula. The screenshot showed that the image was taken when only 60 percent of votes had been counted. Lula took the lead as the rest of the results rolled. The platform has also sponsored events held by Eduardo Bolsonaro’s think tank, the Liberal Conservative Institute, which rallied support for Bolsonaro’s reelection before the official period in which political campaigning is permitted had begun.

Tyrmand also took to Twitter to share his claims that electoral fraud had taken place in Brazil with an international audience.

“Brazen fraud taking place,” Tyrmand wrote, with images of the preliminary results of the vote counting. He also wrote that Lula “can’t campaign [in the streets] for fear of being jeered as a criminal.”

The tweet gained nearly 7,000 interactions and was retweeted by Mark Ivanyo, director of the conservative think tank Republicans for National Renewal. Ivanyo also drew a link between the theory of electoral fraud in Brazil’s elections and the similar narrative of fraud in the U.S. 2020 presidential election. “Looks familiar…,” he tweeted.

Ivanyo’s organization also used Twitter to declare its support for the Brazilian president, wishing him “good luck.” “Bolsonaro has been a phenomenal leader who has fearlessly opposed the leftist agenda,” the group’s Twitter profile tweeted, along with photos of a meeting with Eduardo Bolsonaro.

In an interview, Ivanyo said that Eduardo Bolsonaro was a key figure in the global right and claimed that he had already met the federal deputy at least five times: “Eduardo Bolsonaro is our main partner [in Brazil],” he said. “He is the best and the only person who can succeed his father when the time comes,” he added. 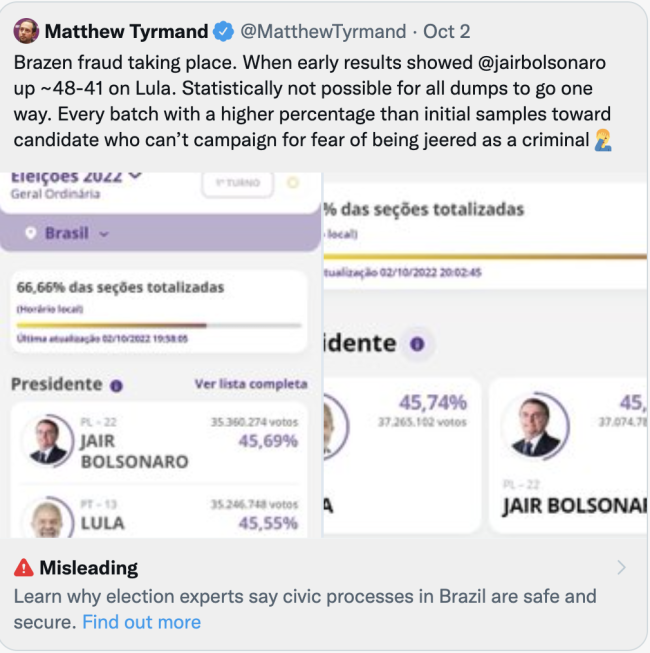 Tyrmand has followed the Brazilian elections in depth on his Twitter profile, posting about the issue at least nine times in the last seven days. Over the course of the weekend on which the elections took place, he retweeted a number of the most prominent pro-Bolsonaro influencers, such as Allan dos Santos.

Dos Santos, a Brazilian blogger now living in the United States, is on the run from the Brazilian justice system after having been put under investigation for alleged antidemocratic activities. He tweeted in English denouncing supposed fraud, accompanied by an image of an infographic showing how the vote share for each candidate changed as the votes were counted. The tweet was promptly retweeted by Tyrmand. 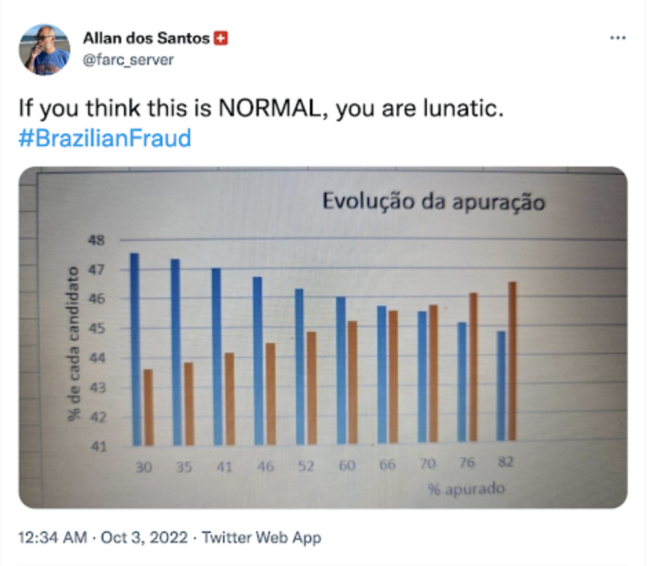 On September 25, Tyrmand published an in-depth article taking aim at Brazil’s Supreme Federal Court (STF) on the far-right website Creative Destruction Media. The main target of the article was the Supreme Federal Court judge and current president of Brazil’s Superior Electoral Court, Alexandre de Moraes, who he called “the rotten character of Brazilian democracy.” He concluded: “Brazil needs all of our help — from conservatives, nationalists, populists, Westphalian sovereigntists, republicans in the literal sense, and even democrats in the classical sense,” since the Brazilian Supreme Federal Court was “out of control.”

Similar instances of fake news were spread through pro-Bolsonaro circles during the 2020 elections in the United States. On that occasion, pro-Bolsonaro opinion-makers brought the U.S. far-right’s narratives about election fraud to Brazil. The same narrative is now being repeated in the discourse about the Brazilian elections.

Donald Trump and other world leaders declare their support for Bolsonaro

Even before voting in Brazil’s elections took place, important figures from the U.S. political world recorded videos in support of Bolsonaro, such as former president Donald Trump, his son Donald Trump Jr., and the Republican senator for Texas, Ted Cruz. The videos were reposted on President Bolsonaro’s social media platforms, as well as on those of his sons, Eduardo and Flávio, who is also a senator.

“I strongly endorse President Bolsonaro, he will be your leader for, hopefully, a long time,” the former US president said. Trump’s video endorsement was posted by Jair Bolsonaro’s Twitter account with subtitles in Portuguese. It was shared 37,700 times and received 223,900 likes.

In Donald Trump Jr.’s video, the former-U.S. president’s son said that Bolsonaro is “the only person who can stop the advance of communism and socialism in South America.” The post received more than 110,000 views on Twitter.

Cruz, meanwhile, said that Bolsonaro has been a “strong friend” to the United States and sent a warning to the Brazilian people, claiming that every country in Latin America that has voted for an “anti-American socialist” has ended up in poverty and misery. Portuguese subtitles were added to the video, which received nearly 11,000 likes and more than 3,000 retweets when it was posted on Eduardo Bolsonaro’s Twitter profile, and received over 17,000 likes and 4,000 retweets when posted on the account of Filipe Martins, a special advisor to the Brazilian president.

On Gettr, one of the most liked and shared links during the weekend of Brazil’s elections was an article from the website Gazeta Brasil that gathered different videos and posts by far-right leaders from across the world in support of President Bolsonaro’s reelection. The piece received 493 likes and 63 shares, according to an investigation by Núcleo Jornalismo.

Laura Scofield has been a journalist for Agência Pública since March 2020. She graduated from the School of Communications and Arts of the University of São Paulo (ECA-USP) where her research focused on undocumented migration of Brazilians to the United States. She collaborates with OBORÉ Projetos Especiais and is the former director of culture at Jornalismo Júnior.