In California, activists share healthcare resources with Indigenous migrant farmworkers who lack access to services due to language and cultural barriers. 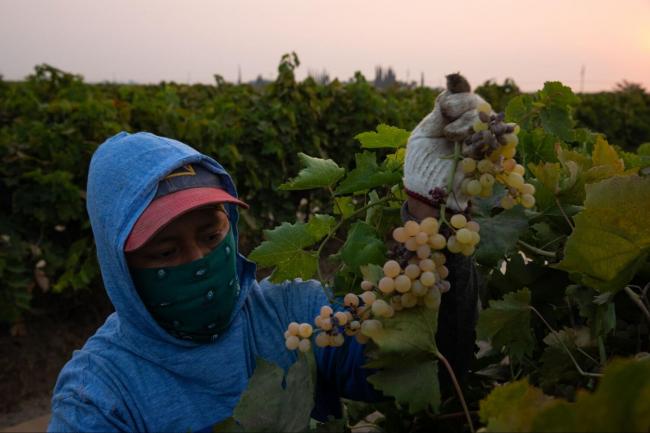 An earlier version of this article was published in palabra.

The scene repeats itself every morning for Silvia Garcia, who described how something like muscle memory automatically moves her hand toward the snooze button.

Five more minutes of eye rest, she said, like a morning mantra.

“We are up early because I have to wake my kids up and get them ready for the rest of the day, and also get to the fields,” said Garcia, an Indigenous farmworker from Mexico’s Guerrero state.

After dropping the kids off at her parent’s house on a recent summer morning, Garcia and her husband are harvesting fruit by 4:30 am.

They are not alone. Labor statistics say 407,300 workers—mostly Mexican and many undocumented—prepare, maintain and harvest fruit, nuts and vegetables up and down the nation’s richest agricultural state.

But often overlooked in these numbers is a growing population of farmworkers for whom even Spanish is a foreign language. At least 165,000 of California farmworkers are believed to be migrants from Indigenous communities in Mexico. The coronavirus pandemic has exposed them to serious gaps in health care. Even before Covid-19, doctors, vaccines and medicine were well out of reach of Indigenous migrant workers who live in fear and mistrust on the margins of U.S. society.

A recent study of California’s farm hands revealed that very few migrants of Indigenous origin are covered by medical insurance; six of every 10 Indigenous migrant women have not visited a doctor in the United States. Moreover, as one Indigenous farmworker said, the sick from his community are more likely to be willing to cross back into Mexico—despite the danger and cost—than face uncertainty and a perceived threat of deportation in California clinics and hospitals.

Garcia is among a population of Indigenous farmworkers in California that, according to one study, speak 23 different languages. Most arrived from 13 different Mexican states. More than half speak Mixteco and another 30 percent speak Zapoteco. These are the dominant Indigenous languages in the Mexican state of Oaxaca and the country’s south-central region. Tlapaneco, Garcia’s family’s language, is spoken by just under 10 percent of California’s farmworker community.

The Indigenous population is one of the poorest in California and is routinely under-represented in U.S. health care, according to the farmworkers study.

“Only nine percent of Indigenous Mexican interviewees were covered [by health insurance] and nineteen percent of their spouses,” the study said. Health insurance covers 31 percent of the non-Indigenous farmworker population, and their children are more likely to have some type of coverage if they were born in the United States. If a family lives below the poverty line, publicly funded healthcare programs are available. 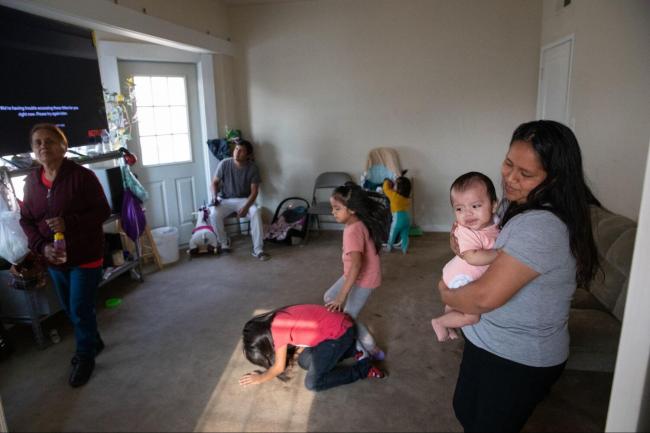 Language as a Healthcare Obstacle

The variety of Indigenous languages spoken in California’s farm fields reflects the diversity of Mexico’s Indigenous people. There they speak 68 officially recognized native languages which in turn are subdivided into more than 350 linguistic variants.

For decades, Indigenous people from Mexico have migrated north to find work and a path out of poverty. Along the way, though, they face cultural and linguistic obstacles that hinder access to health care. A large number come from remote communities in Mexico and start out on the migrant trail with low understanding of medical terminology and services, and the bureaucracies that frame health care. Women are hesitant to speak to male doctors and nurses, especially about reproduction and sexuality.

Because of mistrust and the high cost of uninsured health care in California, many migrant workers seek services in Mexico. Even the undocumented will go to doctors in Tijuana and risk dangerous and expensive crossings back into the United States.

“When they get seriously ill, they go to Mexico, and afterward they brave the border to get back. Few use the medical services [in California],” said a 36-year old Triqui farmworker in the Salinas Valley.

Not even 19 months of a pandemic have stemmed a reluctance made worse by a fear that law enforcement will discover them. People with no representation or legal status have avoided hospitals during the pandemic “out of fear that their information might be released to ICE,” said Ismael Castro, a project manager at Building Healthy Communities organization in the Boyle Heights neighborhood of Los Angeles.

Despite the best intentions of some lawmakers and activists, there are not enough Indigenous language interpreters.

California’s Central Coast farmlands, around Ventura, lead the state in hiring Indigenous-language interpreters, mostly Mixteco speaking, reflecting the local farmworker population. But even there, few services exist for Zapotec and Triqui speakers, the second and third most common languages in the fields.

Elsewhere, compliance with the medical interpreter rule is hard to find. From the fields where Garcia works, near Kingsburg, the nearest hospital or emergency clinic is 12 miles away. No one there speaks Tlapaneco, and they don’t have translators on stand-by. Staff at the facility said that with some lead time, they can find a Mixteco translator. This gap can cause critical delays in emergencies.

More often, hospitals rely on patients to bring someone who can translate, even a child. This is risky, experts said, as it can lead to misunderstandings of technical terms and procedures.

Garcia said that because of the language barrier, Indigenous farmworkers are not well informed about professional health care clinics and frequently don’t know where to go when they are ill. To address this issue, she has become a healthcare activist in her community. In 2020, this dynamic became an acute concern. Early in the pandemic, death rates were high in urban communities. But the pattern reversed, and rural areas have seen increased death rates. Low-wage workers and immigrant communities are at higher risk of infection and death. Therefore, getting the right information about the virus and vaccines translated into the right language can be lifesaving.

Motivated to help her Indigenous community, Garcia started working for Centro Binacional Para el Desarrollo Indígena Oaxaqueño. “My schedule was the same; I will show up at 4 am or 5 am at the fields, but [now] to provide them with information about Covid-19 testing and safety measures they can practice,” Garcia said.

The organization turned Garcia into a bridge of information, from mainstream U.S. healthcare to her Indigenous community.

What she preaches is the scary reality about Covid-19 and California’s Central Valley. The virus attacks the lungs and respiratory system, and the valley’s air is notoriously laden with pesticides, dust, and petrochemical pollution. A region that stretches from Bakersfield to Stockton ranks amongst the highest in California for asthma and asthma-related hospitalizations.

Garcia’s advocacy with the United Farm Workers Foundation has also been a channel for her drive to educate migrants about free essential services, such as not having to pay a fee to apply for protection from deportation through the Deferred Action for Childhood Arrivals (DACA), Covid-19 vaccine events, food distribution sites, and even masks and hand sanitizers.

University of Purdue researchers say that “about 9,000 agricultural workers in the United States have died of Covid-19 and nearly a half-million have been infected.”

Structural inequalities in U.S. healthcare and economic systems increase the risk of exposure and mortality for farmworkers. They believe they cannot miss work. And unlike most other laborers, farmworkers don’t have comprehensive workplace rights, like sick pay or vacation time. If they have to take time off, it’s often money out of their pocket.

The coronavirus has cut life expectancy for everyone in the United States. But for Black and Latino populations it now means three to four years shorter life spans than for white people.

California does not collect data on recipients’ occupations, so it is unclear how many farmworkers have been vaccinated. However, throughout Central Valley’s fields, mobile vaccination clinics can be found. In addition, the UFW Foundation hosts vaccination events each month.

“In the early stages, we were struggling with getting farmworkers vaccinated,” said Jorge Medrano, an organizer with the UFW Foundation. “Once we were able to get testimonies from some Indigenous farmworkers that got vaccinated, that helped us a lot, they were able to talk to their own community.” It takes time, patience, and empathy, Medrano added, to build trust with the Indigenous community. 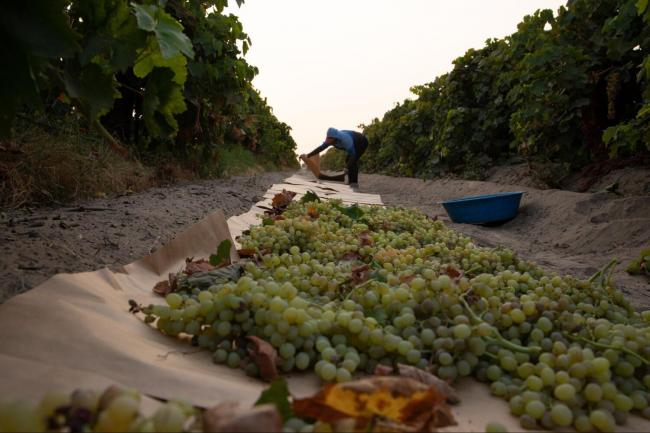 From Farmworker to Activist

The march was in support of the Farm Workforce Modernization Act, which would provide undocumented farmworkers and their families clearer paths to citizenship.

The bill, passed by the U.S. House of Representatives but stalled in the Senate, is fuel for Garcia’s activism.

“I am driving to Bakersfield and other areas to help with translating vaccine and health care information into Tlapanec and Nahuatl,” Garcia said.

Legalization is needed to help overcome the farm industry’s chronic complacency about the health and well-being of the workers it relies on, Garcia said. Ultimately, she added, healthcare information should be available in all languages to avoid confusion.

Companies that own the fields do not provide information on where workers can access health care services or vaccine information. She said that’s an injustice, and it has her determined to start a new organization to provide all manner of information, but especially about health care, to Indigenous-language communities.

“If we educate more people in their language about health care services, the virus, and the vaccine, we can save lives,” Garcia said.

Abraham Marquez is a freelance writer from Inglewood, California, focusing on immigration, and politics.

Zaydee Sanchez is a visual storyteller and documentary photographer focusing on human rights and social change. Zaydee is based in Los Angeles.