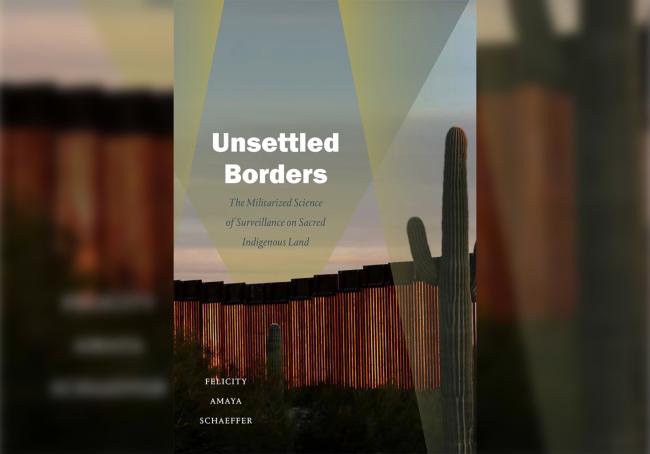 As regularly as the U.S.-Mexico border appears in national headlines, it typically occurs because of an issue regarding immigration and its impact on the American economy. Jobs, social services such as health and education, and crime are the areas in which the debate over immigration policy takes place, usually to the disparagement of “illegal aliens.” Indeed, during election years in the Southwest, especially in Arizona, candidates for every level of elected office are expected to have an opinion about “securing the border.” Espousing an “open border” in such a political environment is tantamount to political suicide. But how many people, on either side of the international divide, regard the land between the Pacific Coast to the Gulf of Mexico as Indigenous land? How many journalists think of going to, say, Tohono O’odham Nation or Fort Yuma Quechan Indian Tribe for comment on the latest crisis erupting between Mexico and the United States? Very few, if any at all. Two years ago, when President Trump used the provisions of the Real ID Act (2005) to order the expedited construction of a reinforced border wall, did people pay attention to the fact that the targeted land was of historical and cultural importance to not only the Tohono O’odham, but also the Hia-Ced O’odham, a lesser-known and non-federally acknowledged tribe? Alas, it takes the intensity of the Trump years to get people, including scholars and policymakers, to recognize that the border cuts across Indian Land. This is where Felicity Amaya Schaeffer’s new book enters the picture.

Unsettled Borders is premised on the author’s realization that she, as a Chicana/Latinx scholar, has not done enough to center Indigenous struggles along the border with respect to immigration and the militarization of border security technology. Hence, Schaeffer’s discourse is organized around four chapters on the Apache, Tohono O’odham, and Maya, in addition to surveillance technology research and development at the University of Arizona. With respect to centering Indigenous struggles, the most impactful chapter is “Occupation on Sacred Land: Colliding Sovereignties on the Tohono O’odham Reservation.” In Chapter One Schaeffer demonstrates the ways in which the U.S. military appropriated Apache scouting and fighting techniques in its strategy for taking military control of the land around Fort Huachuca, Arizona, eventually subduing the Apache threat to white American settlement. She then examines the different but concomitant levels of militarized control that the Department of Homeland Security (DHS), which oversees the Border Patrol, has used to annex Tohono O’odham (TON) land under its jurisdiction on the pretense of national security. Schaeffer does an admirable job at interweaving historical, political, and technological developments, including the growing problem of drug cartels, to explain the deployment of sophisticated drones to patrol the border, which often observe unaware members of TON who live within the patrolled area.

Among the consequences for the O’odham is a divided community. In addition to their homeland, the O’odham Jewed, being divided by the 1854 Gadsden Purchase, the Tohono O’odham are divided politically as tribal government and community members dispute over how to respond to immigrants crossing reservation land, not to mention how to deal with Border Patrol occupying O’odham territory. “The reservation has become a police state where O’odham are constantly under scrutiny,” writes Schaeffer. “Those who speak out against the DHS or Border Patrol have even experienced dire effects, from being treated violently to having their Social Security check payments stopped. The process of becoming bordered by the militarization of their land involves a disorienting experience of having to declare U.S. citizenship, rather than tribal membership, and of constantly being seen as suspicious, as a potential migrant, drug trafficker, criminal, or terrorist.”

In a sense, being Indigenous is criminalized, just as it was when the U.S. Army pursued Apache land protectors during the 19th century. The specter of historic frontier aggression against Indigenous peoples returns in the Conclusion, where Schaeffer provides her reader a summary of the crisis that erupted over “Trump’s Wall” in 2020, which devastated Hia-Ced O’odham ancestral places, namely Monument Hill and Quitobaquito Springs. At this point, though, the limitations of Schaeffer’s centering of Indigenous struggle becomes apparent. Although Nellie Jo David, Hia-Ced O’odham activist and academic director for the Border Studies Program at Earlham College, is correctly identified as Hia-Ced O’odham, this is the only instance in which the Hia-Ced O’odham are recognized as a discrete part of the O’odham Jewed, whose ancestral lands extend from Quitobaquito to the sand dunes east of Yuma. In fact, the Hia-Ced O’odham and the Tohono O’odham—not to mention the Akimel O’odham and Sobaipuri-O’odham—are a transborder nation, complete with lands south of the U.S.-Mexico boundary. More exactly, while Schaeffer is adept at articulating the sovereignty, civil rights, and environmental issues confronting border tribes like TON, she still sees them as casualties of U.S. immigration policy, as opposed to sovereign nations that can set their own political and humanitarian agenda in response to the border problem.

Schaeffer’s discourse is strongest while criticizing the biases of DHS, not to mention the presidential administrations that set immigration policy (both Trump and Biden are scolded for their cultural insensitivities). It is weakest when it tries to give voice to Indigenous points of view. Early in Unsettled Borders, Schaeffer introduces the concept of “sacredscience,” which is her way of elevating Indigenous environmental knowledges, or “land-based ontoepistemologies,” into something that can be theorized: “Sacredscience consists of practices and knowledges that re-enliven relations with ancestors and that activate a calling to nourish the intricate web of entanglements that sustain all living beings on earth.”  What Leanne Betasamosake Simpson, whom Schaeffer cites, understood—especially in As We Have Always Done (2017)—is that terms like sacredscience mean nothing if one cannot connect this concept to how a given Indigenous people spoke about their land relations in their own language. Unsettled Borders is nearly bereft of Indigenous words and names. With respect to the Tohono O’odham, she does refer to their Him’dag a handful of times without much understanding of what the word means. On this point, “O’odham elder Ofelia Rivas defines Him’dag as ‘the canon of beliefs, stories, and rituals that governs O’odham life.” In simplest terms, the O’odham Him’dag (there are alternate spellings) means “our way of doing things,” or what anthropologists call “culture.” However, the Him’dag is more than a lifestyle choice or even a credo; rather, it evokes the teachings that countless generations of O’odham—be they Akimel O’odham, Tohono O’odham, Hia-Ced O’odham, or Sobaipuri-O’odham—have learned since the timeless days when I’itoi, our Elder Brother, brought these things to us. Our Him’dag is how we live in balance with the land that Jewed Makai, Earth Medicine Maker, gave us. Other Indigenous peoples, such as the Indé (Apache) and Maya mentioned in Schaeffer’s book, also have their ways of doing things that they recount in their own languages, based on their own oral traditions, which teach them how to live in balance with the lands that their Creators made for them.

The chapter dedicated to Mayan bee collectives in the Yucatán stood out like a sore thumb. At best, it was obliquely relevant to the discourse on the U.S.-Mexico border that dominates the first half of the book. Although the analysis of the biotechnology, in which bee-like surveillance drones are developed, connects with the militarized technology that is a major theme in Unsettled Borders—particularly in Chapter 3, “Automated Border Control”—the connection with the U.S.-Mexico border was almost completely absent. Schaeffer does acknowledge that “the most numerous Indigenous migrants forced to cross the U.S.-Mexico border are Maya from Mexico, Guatemala, and Honduras,” and that the preservation of Mayan beekeeping is in the interest of preventing young Mayans from needing to migrate.  However, the issue of Mayan migration onto, say, Tohono O’odham land is not addressed. It needed to be.  When this reader got to the subsection titled “The Erotics of Ancestral Beekeeping,” it became obvious that the author’s aim was to write an apology for Gloria Anzaldúa’s appropriation of Mesoamerican cultures into her definition of mestiza, as expressed in her classic work Borderlands/La Frontera. Symbolic of the issues with this analysis is when Schaeffer characterizes Anzaldúa’s border discourse as “a ‘de-tribalized’ and ‘de-Indianized’ Xicana,” her “life’s work has been to dig up Aztec and Mesoamerican sacred knowledges and practices that were stolen through Spanish colonization and U.S. empire” (my emphasis). Any Indigenous people who have endured the indignity of having their ancestors excavated, or dug up, in the name of the archeological sciences will find Schaeffer’s unfortunate choice of words to be grating, even offensive. In the end, Unsettled Borders is fraught with issues, yet it is still worth reading. To Schaeffer’s credit, she is conscientiously trying to place Indigenous nations at the center of the discourse on the U.S.-Mexico border. After all, we have been here since before there was a border, and we will remain until the border—someday—goes away.

David Martínez (Akimel O'odham/Hia Ced O'odham/Mexican), Professor of American Indian Studies, editor of The American Indian Intellectual Tradition: An Anthology of Writings from 1772 to 1972 (2011), and author of Dakota Philosopher: Charles Eastman and American Indian Thought (2009), Life of the Indigenous Mind: Vine Deloria Jr and the Birth of the Red Power Movement (2019), My Heart Is Bound Up With Them: How Carlos Montezuma Became the Voice of a Generation (2023). As a teacher and scholar, his areas of concentration are Indigenous intellectual history; O'odham culture, history, and politics; Transborder Indigenous nations; and, Indigenous art history and aesthetics. Currently, Martínez is working on his fifth book, titled Elder Brother's Forgotten People: How the Hia-Ced O'odham Survived an Epidemic to Claim a Place in Arizona's Transborder History.