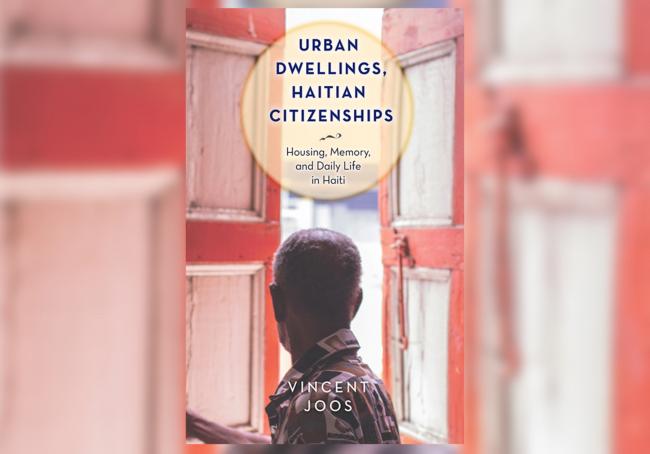 In July 2018, the first in a series of protests broke out in Haiti. Known as “peyi lòk,” the demonstrations literally locked down the country by freezing transportation and economic activities in Port-au-Prince to express outrage over increased gas prices and government corruption. Amid ongoing discontent and fresh political controversy, President Jovenel Moïse was assassinated in his home in July 2021. More than a year later, competing interests continue to stymie the formation of a legitimate transitional government and election commission. Inflation and scarcity have dramatically increased the price of everyday goods including fuel. Coordinated and spontaneous kidnappings and blockades terrorize Haitians and restrict the mobility of people and goods within the capital and the country.

Reading anthropologist Vincent Joos’s Urban Dwellings, Haitian Citizenships: Housing, Memory, and Daily Life in Haiti in view of these recent events reminds those outside the country that the Haitian state’s instability and the people’s vulnerability to infrastructural failures are not an unfortunate twist of fate but are by design. Still, under pressure in varied urban spaces, daily lives continue in all their fullness.

In this timely book, Joos brings readers into the persistent, if precarious, places where Haitians sustain livelihoods and nurture relationships. His central argument is that “citizenship is spatial in nature. Citizenship necessitates the possibility of dwelling—of entering multiple relationships with various places and people to create familiar, personal spaces where people feel a deep and abiding sense of belonging.” Such a definition of citizenship offers a way to theorize how people overcome political disenfranchisement, but it also crystallizes how the spatial violence of resettlement, industrial development, infrastructural neglect, and demolition is an attack on people’s very citizenship.

In a self-reflexive ethnography, Joos moves geographically and topically from the rural north of the country to the urban capital in the west. Within the metropolitan zone of Port-au-Prince, his narrative tracks from Village Casimir—a post-earthquake settlement north of the city—to the neighborhoods of Martissant and Bolosse to the west, and finally into the downtown district of Monatuf and the bordering neighborhoods of Bois Verna, Turgeau, and Pacot. Each of these locations illustrates a different aspect of dwelling and its impediments. Traversing geographic divisions in the country and the capital, Joos disrupts the often monolithic views of both and reveals connections across rural-urban and enriched-impoverished dwellings.

The first half of the book focuses on examples where imposed urban planning has resulted in the clearance, displacement, and abandonment of people and their dwellings. In Trou du Nord, 257 kilometers (160 miles) north of the epicenter of the 2010 earthquake, international disaster aid underwrote the construction of the Caracol industrial park. The project cleared productive agricultural land and evicted peasant households to make way for garment assembly plants and a limited number of low-wage jobs. Instead of helping those suffering from the impact of the earthquake, neoliberal development plans expanded the frontiers of economic and ecological harm.

In the arid plains north of Port-au-Prince, removed from commercial and transportation networks, reconstruction manifested in a government-sponsored housing project, Village Casimir, which opened in 2012 to house people displaced by the 2010 earthquake. Here, more than a thousand poorly constructed two-bedroom, 280-square-foot structures are arranged in an unrelenting grid without shade or landscaping, without space for kitchen gardens, and without access to formal or informal economies. Up until 2016, state policies forbid residents from modifying the structures, operating small household shops, and planting gardens or shade trees, stifling the interdependent relationships traditionally associated with a communal village. In Bolosse, an urban neighborhood west of Port-au-Prince, state neglect of infrastructure has resulted in ravines becoming clogged by trash that washes down the mountain and causes flooding, mosquitos, and bad odors. Limited access to infrastructure, including waste, water, and transportation, and limited ability to claim compensation for displacement, as farmers in Trou du Nord experienced, excludes certain populations from the rights of citizenship.

In contrast, the second half of the book foregrounds the persistence through which people have created networks of belonging around the heritage houses found in downtown Port-au-Prince. Despite sometimes severe dilapidation, the relatively large and ornate Victorian-era gingerbread houses of Bois Verna, Turgeau, and Pacot continue to serve housing needs and support families, who are often connected to the original homeowners through extended family or employment. A similar phenomenon occurs in the more modest, shotgun houses in Mornatuf.

Joos introduces readers to Clomène Firmin, who ran a thriving business selling cold drinks and dry goods from her home in the bustling downtown district, where she profited from the reliable electricity supply and steady foot traffic. Firmin, and those around her, evidence that:

when people are connected to a reliable grid of services and infrastructure, and when they live in dwellings that accord with their cultural values, they are able not only to work and live decently but also to reproduce social and economic practices that have contributed to freedom and autonomy among most Haitians for more than two hundred years.

Unfortunately, the optimism Joos finds in people’s adaptation of historical structures to contemporary life is tempered by a tragic—and all too foreseeable—conclusion, as state-sponsored demolition disrupted the powerful social-spatial networks Joos observed in Mornatuf.

By looking at demolition and construction, contemporary shelters and heritage buildings, Joos nuances long-standing debates—drawing upon the theorization of French philosopher Henri Lefebvre—about the relative influence of the built environment and social structures on the production of space. Joos’s narrative points to the importance of location, infrastructure, social networks, and the presence or absence of regulatory controls. This approach complicates a comparison of post-disaster housing projects like Village Casimir with a neighborhood like Mornatuf, which has been in a state of continuous evolution since the colonial period. Yet, there is an implication that heritage architectures, particularly the gingerbread and shotgun styles of houses, are more culturally responsive to Haitian modes of dwelling. This may be, but it is difficult to isolate the role of design elements and aesthetics—like the characteristic scroll-worked trim, turned finials, deep porches, high ceilings, and shuttered doors and windows of shotgun and gingerbread houses—from geography and histories of land-use and land tenure. How style impacts the cultural responsiveness of contemporary housing is an important and open question to be further studied and experimented with in practice.

Joos generously listens to and retells the stories of small merchants, farmers, taxi drivers, professors, and others, so that their own interpretations of the environments and systems that they navigate ring true through translation. Importantly, as a foreign scholar, he commits to collaborative ethnography, including using long interview excerpts that have been reviewed by the speaker when possible. His partnership with art history scholar Aland Joseph and years-long friendship with merchant Clomène Firmin ground his analysis. These relationships also reveal how race, class, language, and nationality affect the information and access granted to each of them.

Joos uses narrative ethnography to richly illustrate what a venerable lineage of Haitian scholars including Georges Anglade, Michel-Rolph Trouillot, and Jean Casimir have detailed: that Haitians have continuously constructed (and reconstructed) relationships of belonging with this land—Quisqueya, in the Indigenous Taíno—in resistance to exploitative and extractive political and economic systems.

His work builds upon other studies by anthropologists and scholars of development and disasters in Haiti and the Caribbean region, including works cited by Mimi Sheller and Mark Schuller. In fact, he anticipates their contemporaneous publications, Island Futures and Humanity’s Last Stand, respectively. Both books examine the existential crisis of climate change, which up to this point has mostly elicited forms of disaster capitalism and destructive modernization described with precision in Urban Dwellings.

Joos draws out the ambivalent relationship between the creativity and richness of spatial practices of resistance and the structural violence that precipitate them. But he does not skirt the reality that development and humanitarian aid projects in Haiti are another stop on a long itinerary of exploitation and extraction, from colonization to occupation to structural adjustments and disaster profiteering. In what ways are these tactics of urban dwelling distinctly Haitian and in what ways do they parallel tactics used by residents of many unregulated, disinvested, or abandoned territories around the world?

Vincent Joos’s Urban Dwellings, Haitian Citizenships is an important and timely book for those working to change how international development, humanitarian interventions, and disaster response operate in Haiti as well as in the rapidly expanding global network of sites damaged by the confluence of “slow violence” and intense natural hazards. “It’s simple,” says Port-au-Prince resident Jean-Daniel Beauregard in the book, seemingly speaking directly to scholars and international development practitioners. “[T]he more foreign money that arrives in Haiti, the poorer Haiti becomes.” Beauregard, who lives in a “ruined six-bedroom gothic-style house” in Pacot, warns that foreign intervention serves its own interests and not those of ordinary Haitians. At this moment in time, it is critical to remember and resist the denial of citizenship, as Joos puts it, “through very spatial means: evictions, lack of rebuilding, and destructive urban planning.” All of these are ways of excluding people from belonging not just in Haiti, but across countless borders and boundaries.

Irene Brisson an assistant professor of architecture at Louisiana State University in Baton Rouge. Their teaching and scholarship serve to center historically marginalized narratives of building culture and designers in Haiti and the Afro-Caribbean diasporas of the Americas in architecture and built environment studies.