U.S. Foreign Policy in Latin America Still a Repeat of the Past

When will the Biden administration change its pattern of ignoring blatant human rights violations and the deterioration of democracy in Latin America? 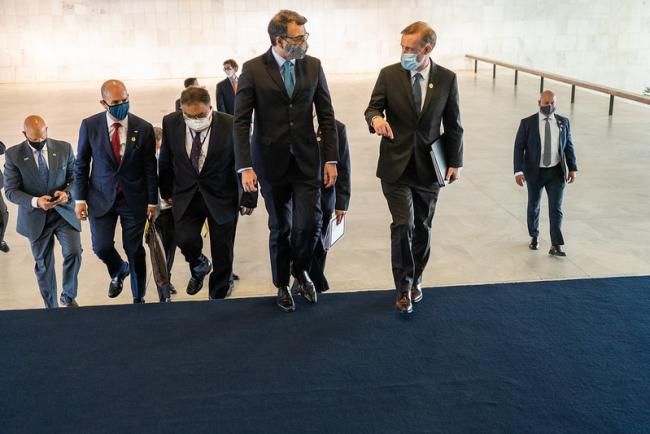 Following right-wing victories in the United States and Europe in 2016, far-right leaders were elected as presidents in Brazil, Uruguay, and Paraguay, and maintained their hold in Colombia. At the same time, authoritarianism in Latin America has grown in recent years, as evident in episodes such as the 2019 coup in Bolivia and the violent repression of demonstrations in various countries. The election of Joe Biden as the 46th U.S. president represented a weakening of this growing global far-right movement. And yet the U.S. response to far-right and authoritarian maneuvers in Latin America has remained predictably inconsistent.

In the face of elections, anti-government protests, and human rights abuses, the U.S. government recognizes and condemns authoritarian trends in countries that resist U.S. hegemony, like Nicaragua, Venezuela, and Cuba, imposing pressures and sanctions in the name of promoting democracy. Meanwhile, in allied countries, like Brazil and Colombia, the administration is hesitant to recognize human rights violations and the deterioration of democracy.

The Biden administration has reclaimed a liberal-internationalist approach to foreign policy, with a renewed emphasis on protecting democracy, human rights, and minority rights. In his Interim National Security Strategy Guidance document, Biden has affirmed the need to overcome threats to democracy—both internal and external—and fortify democracy at home. He promises to “join with like-minded allies and partners to revitalize democracy the world over” and to convene a summit for democracy. Commenting on his vision for U.S.-Latin American relations, Biden said last year that the United States should promote democracy, “but not be in the business of regime change” and committed to conduct the “most transparent administration in history.”

But the administration has shown little will to effectively implement this vision in Latin America. As the United States seeks to contain China’s regional expansion, it is important that the government avoid the mistakes of the past and begin prioritizing human rights over geopolitical clout. However, Colombia and Brazil, which both have presidential elections in 2022, offer two case studies of how the Biden administration has continued to support right-wing leaders in allied countries despite their troubling words and actions.

Colombia and the Repression of Protests

Colombia claims to be Latin America’s longest democracy. Yet the targeting and assassinations of social leaders, blatant human rights violations, and high levels of violence caused human rights nonprofit Freedom House to characterize Colombia as “partly free.” Despite reaching a peace deal in 2016 that ended over 60 years of conflict with the former Revolutionary Armed Forces of Colombia (FARC) guerrilla group, the country still struggles to end its civil war, and approximately 15 percent of demobilized FARC have re-armed. President Iván Duque suspended negotiations with the National Liberation Army (ELN), which continues committing violent acts such as “killings, forced displacement, and child recruitment.” The government has also modified the peace accords with FARC, imposing limits to the Special Jurisdiction for Peace, which addresses justice for victims.

Colombia has been a staunch ally of the United States for years—possibly the country’s main ally in Latin America. In recent decades, the United States has implicitly supported police violence and military abuse by providing funds for Colombian forces. As a senator, Biden was personally involved in the negotiations of Plan Colombia in 2001 that assigned billions of dollars to the country to combat drug-traffickers and left-wing guerrillas. One outcome of the Colombian government’s U.S.-aided efforts to combat insurgents was the false positives scandals, in which military and police officers killed innocent civilians to allege they were insurgents. Decades of U.S. aid has solidified Colombia as one of the major U.S. allies in Latin America and the only North Atlantic Treaty Organization (NATO) partner in Latin America. Since taking office, Biden has reaffirmed the bilateral relationship, describing Colombia as the keystone of U.S. policy to Latin America.

Widespread unrest broke out in Colombia in April when protesters rejected a controversial tax bill. Duque withdrew the package, but violent police repression against activists had already amplified dissatisfaction. In Cali, the epicenter of manifestations, 14 people died and 98 were wounded in late May. In addition to the crackdown at the hands of state forces, armed civilian groups attacked activists with impunity.

Amnesty International reported restrictions to the right to peaceful protest, violent repression, paramilitarism, illegal detention, and torture, but the U.S. Department of State was hesitant to condemn its ally. Although Spokesperson Ned Price called for police restraint and to respect human rights, he also partially blamed the protesters, who he described as abusing the right of protest through violence and vandalism. Some of the weapons used to repress the demonstrators were provided by the United States, and Amnesty International called on the U.S. to stop providing arms to Colombia. Nonetheless, in a call with Colombia’s vice president in June, U.S. Secretary of State Antony Blinken “reaffirmed the enduring partnership,” not mentioning the possibility of suspending the transfer of police and military equipment to Colombia.

The U.S. administration’s priorities can be seen in its emphasis on the importance of security cooperation and the joint commitment “to promoting a peaceful and negotiated outcome to the humanitarian and political crisis in Venezuela.” In other words, despite its internal issues, Colombia is seen as a partner when it comes to exporting democracy to its troublesome neighbor. The alliance is perceived as paramount to the United States because Colombia’s geographic location makes it a strategic counterweight to Nicolás Maduro’s government in Venezuela and its relationship with external powers, especially China.

Brazil and 5G as a Priority

In recent years, Brazil’s relatively young democracy has deteriorated. In 2016,  then-president, Dilma Rousseff, was removed from power in a contested process that many called unconstitutional. In his speech on the impeachment vote, Jair Bolsonaro, then a member of Congress, praised the well-known dictatorship-era torturer Carlos Alberto Brilhante Ustra. Since the  pro-impeachment movements, some politicians and organizations began describing the 1964 military coup as a revolution and denying the gravity of human rights violations, effectively diminishing support for democracy. Despite those warning signs, the U.S. government endorsed Brazilian institutions as functioning in a free and democratic way at the time. Then Vice President Biden described the impeachment as significant but constitutional.

Two years later, Brazilians went to the polls while one of the main presidential candidates, Luiz Inácio Lula da Silva, was imprisoned on corruption charges that have since been annulled due to the judge’s bias in the case. Lula's imprisonment and consequent inability to run contributed to Bolsonaro’s ascent to power. The elections were also marked by episodes of political violence.

Currently, Freedom House considers Brazil “free,” but its score is declining. Economic inequality is increasing, and transparency is decreasing while the government openly spreads misinformation. Democracy is clearly weakening. Brazilian media have discussed the threat of a military coup, while the president has railed against Supreme Court justices and detained critics. Following recent polls showing a decrease in his popularity, Bolsonaro began a campaign—partly echoing Donald Trump's tactics—to discredit the electronic ballot system, based on no reliable evidence

U.S. national security advisor Jake Sullivan visited Brazil when the Brazilian Chamber of Deputies voted on a bill regarding the electronic ballot system. Sullivan discussed the theme at the bilateral meetings and reaffirmed that the United States considers the Brazilian electoral system free and reliable. Following this, the Brazilian Congress rejected the bill, but Bolsonaro persists with attempts to reform the system.

Although Sullivan did not support the bill, he also did not fully condemn Bolsonaro’s actions, offering cooperation on other fronts. When Sullivan met with Bolsonaro, they addressed Brazil's aspiration to join the Organization for Economic Cooperation and Development (OECD) and the possible inclusion of the country in NATO’s global partnership. Sullivan made clear that the United States intends to keep working with Brazil and intensifying the bilateral relationship in security issues, which Brazil’s current government perceives as a win. They also discussed the implementation of the 5G telecom infrastructure in the country, and Sullivan reiterated U.S. pressures regarding the exclusion of Huawei's possible role in Brazil. The United States opposes the use of Chinese 5G technology on security grounds, claiming that there is a risk of espionage. Reporting on the visit, Brazilian newspaper Folha de São Paulo pointed out that U.S. support for the country to join NATO’s program was contingent on vetoing Huawei.

Afterward, in a press briefing, National Security Council Senior Director for the Western Hemisphere Juan Gonzalez was asked about this apparent quid pro quo exchange and how he reconciles that with the threats to democracy. Gonzalez denied that the veto to Huawei was in exchange for support in NATO. He said that it is possible to broaden bilateral relations through military partnership and, at the same time, support free and fair elections. Even if that is the case, this approach is inconsistent with the one that the United States employs in Cuba and Venezuela. Brazil’s 5G spectrum auction started on November 4 and is expected to levy 8 billion dollars. The county has not excluded the Chinese company from the 5G telecom market, but the government has decided to build a separate infrastructure for itself, in which Huawei’s equipment will be excluded.

Biden’s policy in Latin America continues the U.S. tradition of prioritizing geopolitical alignments over all else. Despite blatant violations of human rights and the deterioration of democracy in allied countries, the administration reiterates promises of partnership and U.S. support. On the other hand, the narrative on human rights and democracy continues to be instrumentalized when it comes to countries that resist U.S. hegemony and search for partnerships with other global powers that the United States consider a threat.

With the growth of Chinese trade and investments in the region, Latin America has become the site of competition between global powers. The Trump administration described China’s inroads as predatory and reaffirmed the Monroe Doctrine, while Biden promised to restore U.S. leadership. During the Cold War, this type of great power competition and rhetoric of promoting a “free world” led the United States to prioritize geopolitics over democracy and support anti-communist dictatorships despite their gross human rights violations.

With presidential elections in Colombia and Brazil next year, it is important for the progressive parties to place defending democracy first and for the United States to support the results of the ballot box in face of likely unrest and possible political change. As the rivalry between great powers intensifies and China expands its trade and investments in the continent, it remains to be seen: will the United States put human rights first and avoid past mistakes? So far, all signs point to a repeat of the past.