Magazuelans: How Venezuelan Americans Embraced Trump as Their Savior 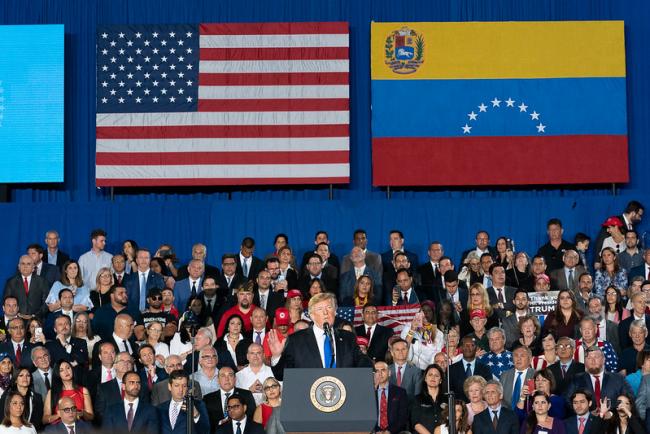 Ahead of the U.S. presidential election on November 3, both Joe Biden and Donald Trump spent hundreds of millions of campaign dollars in Florida, a pivotal battleground state considered a must win. Anticipating a slim margin of victory, the challenge for both camps was to win white seniors and Latinx voters. Republicans exploited the anti-socialist anxiety, while Democrats tried to gnaw enough votes to cross the finish line. This set the stage for a competitive election in a state that has a history of contested elections and where the results are not unlikely to end up in the Supreme Court, as happened in 2000.

The state went for Trump. It was a major setback for the Democratic Party, which saw significantly reduced support in Hispanic strongholds like Miami-Dade and lost two seats in the U.S. House. Trump, however, performed impressively with non-Cuban Hispanics, a group that Biden had hoped would help him win the state. A new constituency emerged who, despite representing a small share of the national electorate, received an unprecedented amount of attention and passionately campaigned for Trump: Venezuelan-American voters.

The postmortem in Democratic strongholds like Doral, the city with the largest Venezuelan-born population in the country, showed a 41.4 percent swing toward Trump. Trump eked out a 1.4 percent win in the city in 2020 after having lost by 40 percent to Hillary Clinton in 2016 when she obtained 52 percent of the votes. And although the Republican candidate carried Florida for the second presidential election in a row, Joe Biden won the presidency, sparking an intense period of uncertainty as Trump refused to concede and engaged in a spree of frivolous lawsuits contesting the electoral outcome.

Meanwhile, in Venezuela, President Nicolás Maduro strengthened his grip on power in unchallenged parliamentary elections on December 6. The opposition led by Juan Guaidó decided to boycott what was widely considered an illegitimate process, clearing the way for Maduro’s allies to retake the sole branch of government outside their control, the National Assembly. The opposition’s path forward turned grimmer after Trump’s electoral defeat left Guaidó without his ostensible greatest North American ally, and his faction at home is increasingly fractured. On January 5, when the new parliament assumed control, Guaidó convened a virtual session in a bid to prolong the expired National Assembly’s tenure. This move met criticism among allies.

These events, together with Trump supporters storming the U.S. capitol on January 6, pushed Guaidó and his coalition into an even weaker position. In addition to the dynamics in Venezuela, the incoming Biden administration is set to deal with an internal political crisis while leading a more moderate foreign policy agenda towards Latin America that is likely to send the Venezuelan crisis to the backburner. Diplomacy will now replace Trump’s bellicose posture towards Maduro, an approach that will be deeply unpopular with Venezuelan American voters in Florida. For them, a less aggressive United States signifies a U.S. withdrawal from democracy promotion and restoration—or more accurately, their best chance to topple Maduro.

The Political Coming-of-Age of the Venezuelan Voter

In recent years, amid the political and economic crisis in Venezuela, the number of Venezuelans migrating to the United States has significantly increased. The population of Venezuelan origin in the country has tripled since the beginning of the century, showing its most significant growth in the past decade. According to the Migration Policy Institute, the number of Venezuela immigrants has increased by 54 percent since 2015, reaching 492,000 in 2018 compared to 256,000 in 2015. This spike makes Venezuelans one of the country’s fastest growing communities, among other immigrant groups. This population growth has also made the Venezuelan American community an electorate to be pandered to and conquered. In a swing state like Florida—home to close to 80,000 eligible Venezuelan voters, an estimated 50,000 of them registered—these votes could be decisive.

This was very likely one of the factors that sparked President Trump’s interest in the Venezuelan political crisis and Venezuelan-American community. He identified an opportunity. He held rallies at Florida International University and roundtable discussions making explicit his support for Venezuelans and their cause for freedom, democracy, and capitalism. The courtship Republicans initiated seemed to pay dividends as Venezuelan support for Trump swelled and worried Democrats. They too attempted to make inroads by challenging Trump. If he really wanted to help Venezuelans, Democrats argued, he should grant them Temporary Protected Status. But no such help ever materialized.

Instead, the Trump administration focused its efforts on supporting the Venezuelan opposition’s bid to oust Maduro after negotiations for free and fair elections collapsed. Even though Trump’s attempt to deliver humanitarian aid via Colombia in 2019 failed and was met with strong disbelief at the politicization of relief, this move also provoked alarming infatuation among Venezuelan Americans. For many, there was finally a leader willing to stand up to dictatorship, and here was the proof.

However, there were concerns among skeptics that Trump was using the Venezuelan crisis to secure not just the rising Venezuelan American vote, but also that of other Latinx communities, like Colombian- and Nicaraguan-Americans, similarly susceptible to fearmongering about socialism and a supposedly socialist regime. The Trump campaign labeled Biden a radical socialist, ineffectively linking him to Gustavo Petro of Colombia and Hugo Chávez, in an effort to sow distrust and fear amongst Latinx voters in Florida.

The electoral implications were evident. The Trump administration has had no effective policies on Venezuela beyond sanctions, the results of which are debatable, and its aggressive rhetoric did not fracture Maduro’s coalition. On the contrary, it strengthened and consolidated an anti-imperialist alliance with Iran and Turkey—joining Cuba, Nicaragua, Russia, and China—in response to what seemed more like a bluff than a credible threat. But the optics were enough for Venezuelan Americans in Florida. According to a poll conducted in August by the University of North Florida for El Diario, Venezuelans considered Trump and the GOP better allies than Biden and the Democrats in the cause for Venezuelan democracy. The vast majority opposed negotiations and supported the “military option” that Trump put on the table to deal with Maduro. The result? Two-thirds of Floridian Venezuelans said they would vote for Donald Trump in the November election.

Venezuelan-American support for Trump brought a number of their contradictions to the fore. They declared their opposition to Chávez and Maduro on the basis of political persecution and exclusion, political corruption, lack of freedom of speech, demonization of the press, and the politicization of the judiciary—in short, the chavista dismissal of democratic principles, which is becoming more difficult to deny under Maduro. And yet they embrace Trump, despite the fact that he mimics these very traits.

The Trump administration has based its political brand on the exclusion of those who have resisted and opposed the MAGA pledge. Trump has adamantly demanded limits to freedom of the press; he has ridiculed journalists and the media; he has threatened to prosecute and jail his political opponents; he has sought to take measures to conceal damaging information, fueling a lack of transparency; he has openly promoted conservative and loyal court justices and judges, thus politicizing the judiciary; and he has invited his supporters to distrust the institutions of U.S. democracy.

It should go without saying that no two comparisons are ever perfect, and much of the surge of analysis that compared Trump to Chávez was superficial. Yet it is undeniable that had it been a leftist candidate who displayed such characteristics, Venezuelan Americans would have held them in contempt. That was their response in 2018 to former Bogotá mayor Gustavo Petro’s bid for Colombia’s presidency. With the phantom threat of castrochavismo, the Right portrayed Petro as an authoritarian figure linked to Maduro, whipping up fears of Colombia being transformed into another Venezuela. Yet pro-Trump Venezuelan Americans are in denial and refuse to admit the similarities in the case of Trump—or perhaps they never had a principled commitment to democracy.

What they see in Trump is a supposed successful businessman. His wealth and success communicate to many that he is a winner and not reliant on an influential donor class. Trump has independence. He is uncompromised. But most importantly, Trump has provided a political home to an essentially exiled community because he is the enemy of Maduro and socialism. They are unable or unwilling to interpret political events outside of Venezuela on their own terms. Everything is viewed through the lens of chavismo and Venezuela.

The role race plays in this conversation cannot be overlooked. In Venezuela, this is a topic often eluded and not openly discussed. Venezuelans pride themselves on being a mixed nation and tend to privilege the less uncomfortable question of class—ignoring how it intersects with race—to explain disparities. But here in the United States, it becomes critical to acknowledge race’s significance, especially when one considers the process of assimilation, which could be a factor motivating political behavior.

The pervasiveness of systemic racism and police brutality became undeniable in the wake of George Floyd’s brutal murder. The Black Lives Matter movement was making historic gains in public support, and corporations began to pledge millions of dollars to organizations committed to advancing racial equality and other social justice causes.

The events that ignited the protest movement last summer provoked a strong reaction from the pro-Trump Venezuelan expat community. They accused BLM of being a Marxist organization, providing them with an ideological cover to criticize the movement while concealing their underlying racism. This is not entirely unprecedented in Venezuelan politics, as it was perfectly acceptable for the opposition to attack Chávez in racist terms when he was first elected in 1998. Paradoxically, Venezuelans come from a cultural environment where race is not openly debated, and yet there is an implicit understanding that (access to) privilege is associated with whiteness. Due to their experiences in their home country, white Venezuelan Americans (especially those of European descent) may not necessarily think of themselves as part of a community considered to be a minority—they are more likely to identify as American, without the Latinx label.

Venezuelan Americans are becoming increasingly relevant to Florida’s political landscape. Trump has given the Venezuelan expat community the national spotlight, recognition, and promised to back their political struggle against Maduro. Venezuelan Americans have demonstrated reciprocity, including accepting—almost without question—the conspiracy theories that circulate about Democrats, BLM, and other groups that oppose Trump.

Although Trump will soon be out of the White House, Venezuelan Americans have already taken up the banner of his culture war against liberals and progressives, thus opening a discussion on how race and politics intersect and influence their cultural assimilation process. However, their most important challenge will be the role they choose to play in preserving U.S. democracy. A group of Venezuelans that supported Biden during the campaign could be a sign that there are opportunities for growth on the other side of the political spectrum.