Attempts to pursue justice for the alleged coup and human rights violations that followed the 2019 elections in Bolivia could break with Latin America’s pattern of impunity. 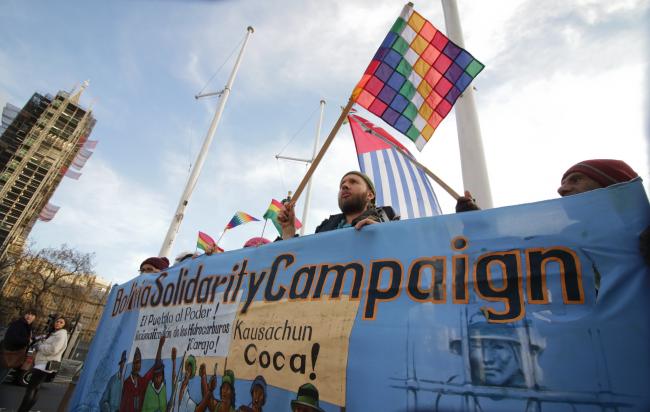 Late on March 12, Bolivian police showed up at ex-president Jeanine Áñez’s house, brandishing an arrest warrant. The former interim leader was found curled up inside a bed base, hiding from the agents. She was led down the opulent stone stairway of her home in a cat T-shirt, her gaze expressionless behind a Covid-19 facemask, and into a waiting police truck.

In a final Tweet, she decried her arrest as “abuse” and “political persecution.” Then, she was transferred to a prison in the capital, La Paz, where she remains in preventive detention.

Áñez is being investigated over allegations that she participated in a coup against former Indigenous leftist president Evo Morales who resigned under duress on November 10, 2019. Vice President Álvaro García Linera and the presidents of the senate and deputies also tendered their resignations. Áñez, a conservative Christian senator serving as second vice-president of the senate at the time, assumed the presidency after a two-day power vacuum.

As interim leader, her only mandate was to call elections within 90 days. Instead, she presided over grave human rights violations and made sweeping political changes, clinging to the top job for nearly a year.

Now, as the Bolivian opposition alleges political persecution and survivors of the violence demand justice, her case has become a bellwether for regional rights accountability.

In the coup case, Áñez stands accused of the crimes of sedition, conspiracy, and terrorism. Her former justice minister Álvaro Coímbra and energy minister Rodrigo Guzmán have also been arrested.

Her right hand man (and, some argue, puppet master) Arturo Murillo, who served as her minister of government, fled to the United States, but in May, the U.S. Justice Department announced that it was pressing charges against him for corruption and money laundering in his handling of a tear gas contract. His alleged co-conspirators have pleaded guilty.

Áñez’s defense minister, Luis Fernando López, also skipped the country. He has admitted to negotiating with the army before Morales resigned.

Santa Cruz governor Luis Fernando Camacho, a right-wing businessman and ringleader of the protests against Morales, was called to a court hearing about the coup case on October 7.

Morales’ ouster followed deeply controversial electoral fraud allegations, which triggered violent protests and a crackdown under Áñez. The episode claimed 37 lives. In October 2020, Morales’ left-wing Movement Towards Socialism (MAS) party was voted back in with a 55 percent landslide, this time with former finance minister Luis Arce in the top job.

Human Rights Watch has stated that the evidence against Áñez is unclear, describing the proceedings as “grossly disproportionate.” Many MAS critics regard Morales’ resignation as the result of electoral fraud and a popular uprising and deny that there was a coup. In their view, the proceedings against Áñez cut important corners and violate her right to due process in an endeavour to please MAS’ followers. But numerous seasoned observers disagree.

“She came to power through a set of legal and extra-legal manoeuvres, and it’s hard to put all of them together without having access inside some of those rooms,” said Dr. Carwil Bjork-James, assistant professor of anthropology at Vanderbilt University.

MAS politicians weren’t present at the parliamentary session in which Áñez was confirmed as president, meaning it lacked both the necessary quorum and the majority party.

During this turbulent transition period, key decisions about the future of the country appear to have been taken by individuals with no form of democratic mandate, such as Arturo Murillo and former president Jorge Quiroga, Bjork-James pointed out. Representatives of the Catholic church and the European Union were also involved in the talks, despite having no formal role in Bolivia’s political system.

“I think there’s a meaningful set of questions, and even if they never prosecuted her, the question of what happened, when, is an important part of Bolivia’s democratic process,” Bjork-James said.

For many, justice for the human rights abuses that took place during the crisis is at least as important as establishing whether the events formally constitute a coup.

On November 15, the army and police opened fire on a group of pro-MAS coca growers as they marched through the town of Sacaba, killing 10 protesters. On November 19, the police and army shot and killed 11 more people in the neighbourhood of Senkata in El Alto, La Paz’s largely Indigenous neighboring city. The brutality was nominally directed against protesters blockading a gas plant, but many of the injured appear to have been bystanders.

Yosimar Choque Flores was walking to the bank to deal with urgent paperwork that day, but he never made it past the gas plant. “My human side came out, because I could see women who were hurt, children. The military were shooting. And I went to help,” he recounted in Senkata three weeks after the killings.

“I just felt this wetness, and they’d put a bullet in my right arm.”

The bullet severed an artery and a nerve, leaving him unable to move his hand, and therefore, unable to work. “I’m a builder. A day I work is a day I earn… I have two beautiful daughters to support. Before, I could get by... but now I can’t.”

The Áñez administration denied responsibility for the killings. But multiple human rights investigations have found that events in both Senkata and Sacaba can be classified as massacres, also highlighting killings of protesters in El Pedregal, the use of torture, the rise of right-wing para-state motorbike gangs, and a surge in racist and sexist attacks against Indigenous people.

The reports acknowledge abuses directed at anti-MAS protesters, too. During a confrontation in the highland town of Vila Vila, anti-MAS protesters were stripped, beaten, and doused in gasoline. Investigators found that the local government had supported the blockade and should have at least assumed the possibility of violence.

Several houses belonging to people on both sides of the divide were burned down, and many protesters were killed or severely injured in clashes between opposing sides.

But human rights experts have warned against arguments that each side suffered comparable rights abuses. “As I have always said about the situation in Bolivia: human rights violations (by action or omission of the state) are not equivalent to crimes (by actions or omissions) among civilians,” tweeted Paulo Abrão, former executive secretary of the Inter-American Commission on Human Rights.

President Arce said in August that the government would pursue a trial of responsibilities (a special form of trial for ex-presidents) against Áñez. This would have to be approved by a supermajority in the country’s assembly.

If this fails, there may be legal mechanisms to place her on trial in the country’s regular courts, or through international courts such as the Inter-American system or the International Criminal Court.

Some of Bolivia’s former leaders have been successfully prosecuted for human rights abuses in the past. Luis García Meza, who from 1980-1981 presided over a bloody 13-month dictatorship with strong links to the cocaine trade, was sentenced to 30 years in prison in 1993. Human Rights Watch said at the time: “To the best of our knowledge, the conviction marks the first time in Latin American legal history that members of a de facto military government have been held to account for usurping power and violating constitutional norms.”

But attempts to bring former dictator Hugo Banzer Suárez to trial failed when Marcelo Quiroga Santa Cruz, the deputy spearheading the proceedings, was assassinated during the García Meza coup. Banzer went on to be elected president in 1997 and died shortly after leaving office.

President Gonzalo Sánchez de Lozada’s government collapsed after the military killed around 65 protesters in El Alto in 2003. Sánchez de Lozada fled to the United States, but he and his former defense minister José Carlos Sánchez Berzaín were handed a $10 million damages judgment by a Florida court under the Torture Victims Protection Act.

MAS officials have said that trials against Áñez will likely be postponed until 2022 because there is not enough time to hold the necessary proceedings before the end of the year, when members of the legislative commission handling her case are due to step down.

Áñez’s family says that her health is deteriorating in prison: she reportedly attempted suicide in August and earlier this month, she said that she was suffering from anorexia.

But even as the prospect of a trial appears to solidify, many who bear responsibility for the atrocities remain at large. It remains to be seen where the buck will stop.

Amy Booth is a freelance journalist whose work focuses on social issues, human rights and politics in Argentina and Bolivia. She writes for outlets including The Guardian, Vice, New Internationalist and the Lancet.

A version of this piece first appeared on the Pirate Wire Services newsletter.