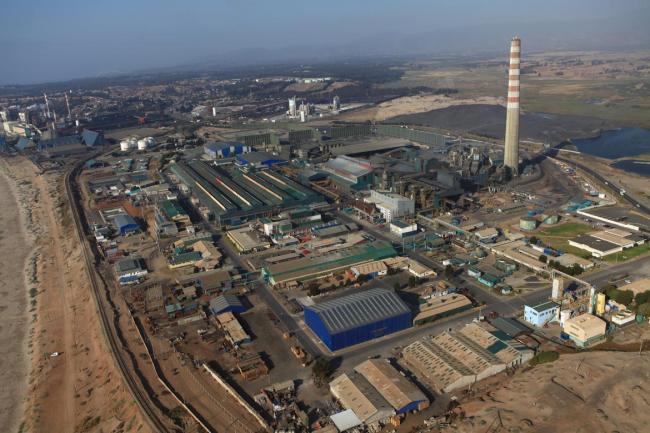 Feminist activists in Chile have won a significant victory in their fight against the poisoning of people and the environment in the area nicknamed "the Chilean Chernobyl."

Their calls for environmental justice in the polluted Quintero-Puchuncaví Bay area of central Chile have largely gone unheard—until now.

On June 17, the government of the newly elected president Gabriel Boric announced that a smelting plant run by the state-owned National Copper Corporation of Chile (Codelco) would close. It followed a serious pollution incident that affected scores of people in this heavily industrialized area next to the Pacific Ocean.

Katta Alonso, from the grassroots feminist group Women of Quintero-Puchuncaví Sacrifice Zone in Resistance (Muzosare), was bursting with excitement after hearing that Codelco, the world's largest copper producer, would shut down its smelter in Ventanas industrial park, just a few blocks from her home.

“We knew it had to be done, but we didn't expect them to do it,” she said.

Her former neighbor, Cristina Ruiz, also a member of Muzosare, cried with emotion. "I could not contain myself. It has been David against Goliath… Then you get news like this!" she said.

Quintero-Puchuncaví Bay is the oldest of Chile’s five “sacrifice zones,” also known as “pollution havens.” These heavily industrialized areas containing mainly thermoelectric, petroleum, and chemical plants were set up in the 1960s to boost economic development.

The first facility, belonging to the national oil company ENAP, opened on the Quintero-Puchuncaví Bay shore in 1954. More arrived in the 1960s and now there are 17 plants in the Ventanas industrial complex, run by both state-owned companies, including Codelco, and private companies, including AES Andes, Gasmar, and Oxiquim.

More than 50,000 people live in this zone alone—and 150,000 in the four others. Locals are familiar with acid rain and yellowish-green clouds of toxic gas in the sky. There have been numerous incidents of serious pollution in the bay area.

On June 6, more than 100 people, most of them children, presented symptoms of poisoning, including headaches, vomiting, and diarrhea. Codelco, whose smelting plant is responsible for almost 62 percent of sulphur dioxide emissions in the bay, halted operations.

Boric announced the closure of the smelter less than a fortnight later, promising relocation, retraining or severance payments for the plant’s 350 employees, and the consideration of similar options for 390 freelance contractors.

Unions rejected these proposals and went on strike. Union leader Andrea Cruces said during a Senate hearing that workers had received “undignified and painful treatment” from Codelco and the government, and that the closure was “unfounded,” both economically and environmentally.

But the workers decided to end the strike and agreed to work with Codelco and the government to ensure a fair phase-out. On July 2, the smelter resumed work, pending its final closure at an as-yet unidentified date.

According to Muzosare and other local groups, only half the workers live in the bay area. This explains their opposition to the closure, said Alonso: “They have not experienced the awful consequences first-hand.”

The most recent poisoning incident was not the worst in the Quintero-Puchuncaví Bay area. In 2018, at least 1,800 people were poisoned, again most of them children.

The difference this time is the response of the government. Boric only took office in March, after promising as a candidate that he would clean up the country’s “sacrifice zones.”

Chile’s lack of properly enforced environmental regulations allows high emissions of contaminants in the air, water, and soil, including heavy metals, sulphur dioxide, nitrogen oxides, and volatile organic compounds. But insufficient data makes it impossible to know how harmful such pollution really is.

A recent report on the Quintero-Puchuncaví Bay sacrifice zone by the state auditor revealed that the authorities had not analyzed precisely which contaminants were present, and there is still no methodology for measuring the effects on people’s health and no comprehensive approach on dealing with these issues.

But the community knows the effects. It feels them. In the 1980s, male workers at the copper plant started turning green, with blisters on their bodies secreting a green liquid. When they died, their corpses were green-colored.

Shortly afterwards, women began to notice damage in their own bodies. “Behind this fight, there are many women with uterine and breast cancer [and] one in four schoolchildren have neurological conditions,” Alonso said, citing data collected from the municipality of Puchuncaví and processed by Muzosare.

A recent study by the University of Valparaíso’s faculty of medicine showed that chronic exposure to heavy metals in Quintero-Puchuncaví increased the risk of failure in the function of gene p53—which suppresses tumors—triggering a spate of bladder, lung, stomach and uterine cancers.

Another study, from 2019, revealed that children and adolescents in the area are more likely to develop cancer than adults, because their bodies contain higher concentrations of heavy metals such as arsenic.

Other research has shown that toluene, one of the pollutants in the bay area, is implicated in the high prevalence of miscarriages.

Until 2017, when Chile’s ban on abortion was relaxed, “pregnant women had to carry dead fetuses in their wombs until the sixth or seventh month,” said Alonso. “They had to wait for the miscarriage to happen. Imagine that.”

Women on the Frontline

More than a decade ago, women in Quintero-Puchuncaví—housewives, social leaders, craftswomen, activists, graduates, and school teachers—put aside differences of age and background to fight together for the health of their families, the community and the environment.

They broke the silence of the authorities by taking ownership of their role as carers of families and communities. They learned about the environment and human health by gathering information and studies. They organized education and awareness activities, social mobilization and participation in communal and public spaces.

They also used the law to denounce the violation of their rights, and connected to local, regional, and national networks.

“This is an achievement for all of us…We have made visible a situation hidden for many years,” said Alonso.

“Today we have a government that declares itself feminist, that promises to put an end to sacrifice zones,” she said. “Otherwise, they would still be making decisions in the best interests of the macroeconomy, but detrimental to people's health and lives.”

She said that “it is hard for us to celebrate this as an achievement, because we have a long way to go,” but recognized that: “Indeed it is.”

The Beginning of the End of Sacrifice Zones?

After six decades of shrouding the region in dense, acrid, poisonous gases, the polluting industries may finally be on the brink of closure.

“We are strongly committed to effectively transforming Quintero and Puchuncaví into an environmental recovery zone,” Hernán Ramírez, secretary for the Valparaíso region within the Ministry of Environment, said.

Ramírez, an environmental expert who has worked for 20 years with social groups in the bay, said: "We want to leave behind the neglect and violation of human rights, especially rights related to the environment and the life and health of the people.”

He has announced measures to identify air pollutants and a scheme for early detection of pollution incidents in Quintero-Puchuncaví.

Meanwhile, the national government and Codelco agreed to reinvest 30 percent of the company’s profits over the next four years, with the declared intent of injecting more resources into “environmentally sustainable projects”.

Chile is the largest copper producer in the world, responsible for 27 percent of the global total, and Codelco has the largest investment portfolio in the mining industry worldwide. Copper has been a lifeline for Chile during its post-pandemic economic recovery, accounting for 13.3 percent of the country's GDP in 2021.

Angelina de los Santos is a feminist journalist based in Uruguay, with a broad background in human rights reporting, she has a bachelor’s degree in communications from Universidad ORT Uruguay, and has worked in social and international media for almost ten years. Recently, she has reported on socio-environmental conflicts and the consequences of extractivism in Latin America, and also investigated how state and private surveillance violates the rights of Indigenous people, social leaders and women in the region. Follow her on Twitter (@angelinadlsh).