25 Years After the Peace Accords, Democracy Weak in Guatemala

In Guatemala, safeguards against corruption, impunity, and state violence are being dismantled by the politicians, elites, and military and some fear the return of an authoritarian state. 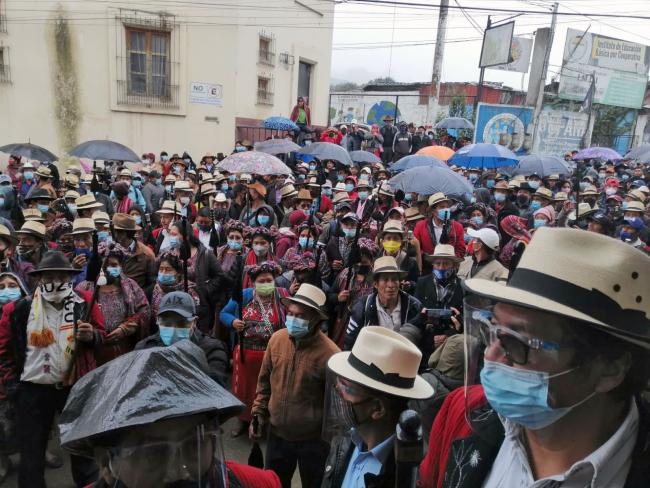 Sit Po’p, an Ixil Maya authority from Nebaj, was six years old when the Guatemalan Peace Accords were signed on December 29, 1996, officially ending one of the longest civil wars in Latin America. Reflecting on what peace means today, Sit P’op stated that there is peace in Guatemala because there is “no more war or genocide.” But at the same time, she acknowledged the country is still “far from a peace as it should be.” The end of the war signaled a promising future for democracy, justice, and human rights, but the government has often impeded progress in these areas.

“The peace accords were a hope for the country, the possibility of a multiethnic, multilingual, and multinational Guatemala in a modern democratic state,” said Pap Me’k, an Ixil Maya ancestral authority from Nebaj. But now, 25 years later, they are a source of frustration. “The word peace became political discourse rather than reality,” he said. He contended that the Guatemalan state was given the responsibility in implementing the Peace Accords, but that they have instead destroyed the little progress that has been achieved since then.

The comments from Sit Po’p and Pap Me’k came after the people of Nebaj held a community assembly in mid-December to denounce the municipal mayor Virgilio Gerónimo Bernal Guzmán and demand his resignation. Bernal Guzmán, who was invited but did not attend the community assembly, has been accused of engaging in various illicit and corrupt activities, which include “approving the regulation for the right of way and construction of electric power towers that was rejected by residents; as well as overvaluing food and products delivered during the pandemic.” The community assembly is part of the Ixil’s historical struggle to pursue peaceful and local community-based solutions and transparency to institutional, governmental, and structural corruption and impunity at all levels of government.

During the Guatemalan Civil War (1960-1996), the government committed genocide, massacred, and disappeared Maya residents of Nebaj. Today the region is invaded by megaprojects such as hydroelectrics. These extractivist companies—in collaboration with the government—commit human rights abuses, violate Indigenous communities’ rights to consultation, and persecute Indigenous leaders, among other crimes. Companies have been implicated in bribing high ranking government officials to obtain licenses and contracts. This includes HidroXacbal (in Chajul) which obtained “energy distribution contracts” by bribing the Minister of Energy and Mines.

Guatemala is experiencing a weakening of democratic structures and the further entrenchment of corruption and impunity. The country is plunging into further violence and civil strife, contributing to the forced displacement and migration of thousands. Some of the root causes of the war, such as land and structural inequalities and the marginalization and exploitation of Indigenous peoples continues. Despite this, Indigenous and oppressed peoples in Guatemala continue to struggle to build a democratic and dignified future.

The Weakening of Democracy

For Pap Me’k, democracy does not exist in Guatemala, where it is risky to speak of democracy and advocate for human rights.

“What governs in Guatemala is impunity, it is corruption,” he said. “[Guatemala] is a narco state, a state that has been captured by the mafias, by the traditional oligarchy that have always been in power and [who run] the country as if it were their private plantation.” Sit Po’p echoed these words and noted that many Indigenous communities have been abandoned by the corrupt state and are displaced from their territories by the armed forces.

That members of the Guatemalan military and government officials have long been implicated in narcotrafficking raises concerns about the influence that organized crime has in the country. A 2021 U.S. investigation implicated the Guatemalan military in aiding narcotraffickers in loading drugs into trucks, transporting cocaine, providing security, and receiving between $400,000 to $1 million in payment for their services. Politicians at all levels of government have been accused of working with and for drug cartels, such as the municipal mayor of Esquipulas Palo Gordo and his family who has been accused of money laundering and transporting cocaine into Mexico.

The few protections, safeguards, and entities geared towards combating corruption and impunity have been gutted in recent years. The United Nations-backed anti-corruption unit created in 2006, the International Commission Against Impunity in Guatemala (CICIG), gave Guatemalans hope that justice would be served to corrupt politicians, such as former president Otto Perez Molina who was forced to resign in 2015. But the right-wing and military backlash was swift. In 2019, CICIG was forced out of the country. Its domestic counterpart, the Special Prosecutor’s Office Against Impunity (FECI), has also been severely undermined after the forced exile of special prosecutor Juan Francisco Sandoval in July 2021. In January 2022, FECI made a formal request to remove the immunity of Judge Erika Aifan, after she “connected the case of alleged bribes to journalist Juan Luis Font” by a former ex-minister. The U.S. State Department has labeled this move to remove Aifan’s immunity as “a blatant effort to obstruct investigations into corruption and an affront to the integrity of Guatemala’s highest courts.”

Judges and lawyers combating corruption, such as Sandoval and Aifan, have been arrested, criminalized, and threatened. In June 2021, four judges requested that the Attorney General’s office review the 30 complaints made against them, which they claim are intended to harass and legally persecute them. But the rule of law and its defenders are also vulnerable, given that Attorney General María Consuelo Porras has been labeled by the United States as “undemocratic and corrupt.” Today, there is little government oversight to protect against government abuses, which remain rampant. Despite these threats and challenges within the judicial system, families, activists, lawyers, and judges continue to seek justice for the crimes, violence, disappearances, and genocide carried out during the war.

In recent years, the Guatemalan state has become increasingly militarized and has overused states of sieges to suspend civil liberties, and criminalized, persecuted, and arbitrarily arrested activists, Indigenous leaders, journalists, and environmentalists. As a result, some fear that the government is regressing towards authoritarianism. On the 25th anniversary of the Peace Accords, the National Platform of Organizations of Victims of the Internal Armed Conflict issued a statement that expressed their concerns, noting that not much had changed since the war ended. They argue that the “Pact of the Corrupt” (a group of corrupt business, military, and politicians) have taken control of the justice system and have used the military to repress Indigenous communities, particularly those who are resisting extractivist industries. These concerns were reaffirmed by the Human Rights Ombudsman of Guatemala, Jordán Rodas Andrade, who warned that the current government of Giammattei was undoing the gains of the peace accords and that a network of organized crime had been embedded within the government and was “seriously threatening democracy and social peace.” This, he said, presents significant danger to human rights activists and journalists, adding that this violence could be the warning signs of “an arbitrary and oppressive regime that would once again have Guatemalan families mourning and also forcing new human displacements.”

Towards a More Dignified State

Indigenous communities and the ancestral authorities have been at the forefront in struggling against government abuses and impunity and building a dignified country. They have led many of the national protests in recent years and offered solutions to rectify the long-standing problems facing Guatemala, such as the promotion of a plurinational state, defending land and water, and resisting extractivist industries and militarization.

Twenty-five years after the Peace Accords, Guatemalan democracy is at a crucial political juncture in which the safeguards against corruption, impunity, and state violence are being dismantled by the politicians, elites, and military. Thousands of Maya and Guatemalans are migrating and fleeing the country due to structural inequalities, state violence, and forced displacement.

So, the search for a long-lasting peace continues. Pap Me’k hopes that change can be achieved.

“In Guatemala, we need an inclusive country, without discrimination, without racism,” he said. Guatemala is a diverse, multiethnic, multilingual country, and the people need their rights to be respected, opportunities for organizing, and opportunities for generating development. And most of all, said Pap Me’k, they need to be “governed with dignity and without corruption.”

Giovanni Batz holds a PhD in Social Anthropology from the University of Texas at Austin and is currently a President’s Postdoctoral Fellow in the Department of Native American Studies at the University of California, Davis. His publications can be found here.