Wins and Uncertainties After 10 Years of Affirmative Action

Brazil’s so-called Quota Law has expanded access to higher education for low-income and Black students. The future of the policy now hangs in the balance. 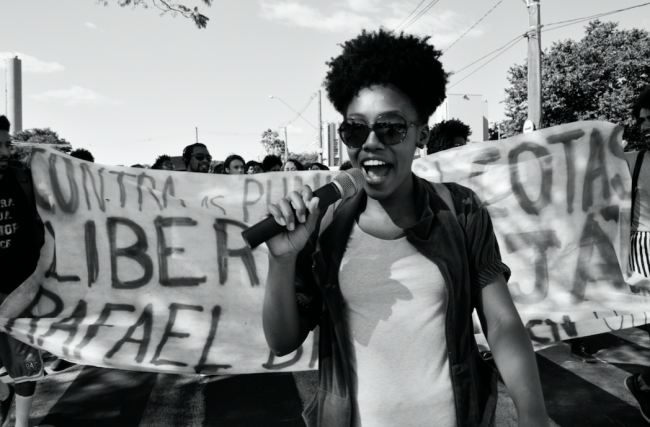 The debate over race and education has long permeated academic discourse. Issues such as access to the education system, discrimination in textbooks, school performance, and academic success are among the topics most widely debated in numerous studies. In Brazil, the path through the education system is marked by differences and inequalities that disproportionately impact Black students. As the work of Luiz Cláudio Barcelos, Carlos Hasenbalg, Ricardo Henriques, and others has shown, it is on the shoulders of these students that the weight of exclusion reliably falls.

Beyond academic spaces, education has always been central to Brazil’s Black movements. Early activists were clear on the fact that education did not serve all sectors of the population equitably; they perceived a gap between myth and fact—that is, between the notion of ​​a Brazilian racial democracy and the real condition that Black people experience in the country. When the Brazilian government instituted affirmative action in 2012 with Law 12.711, it was the result of concerted social struggles. While the so-called Quota Law has achieved important advances in the last 10 years, challenges remain to ensuring its continuity.

The Struggle for Racial Equality in Education

Attempts to address racial inequality in education through affirmative action policies were already in motion in Congress beginning in the second half of the 20th century. In June 1983, federal lawmaker Abdias do Nascimento, a leading figure in the Black movement, introduced Bill 1332/1983, which proposed compensatory measures aimed at promoting equality for Black people. The bill sought to create “a true racial democracy” in the Brazilian nation. After several internal processes, the proposed legislation was shelved in 1989 without any action being taken.

In the early 1990s, the Black movement took up its “Black and Education” agenda once more through regional meetings. Perhaps the most outstanding event of that decade came on November 20, 1995, when 30,000 marched on Brasília in the Zumbi March Against Racism. The march, commemorating 300 years since the killing of the 17th-century quilombo leader and freedom fighter Zumbi dos Palmares, concluded with organizers meeting with President Fernando Henrique Cardoso at the government headquarters. The leaders of the Black movement denounced racial discrimination and gave the president the movement’s “Program to Overcome Racism and Racial Inequality,” which contained proposals to combat racism and its harmful consequences. Among other proposals, the plan called for implementing the Convention on the Elimination of Racial Discrimination in Education and developing affirmative action policies to facilitate Black students’ access to vocational courses, universities, and cutting-edge technology fields. 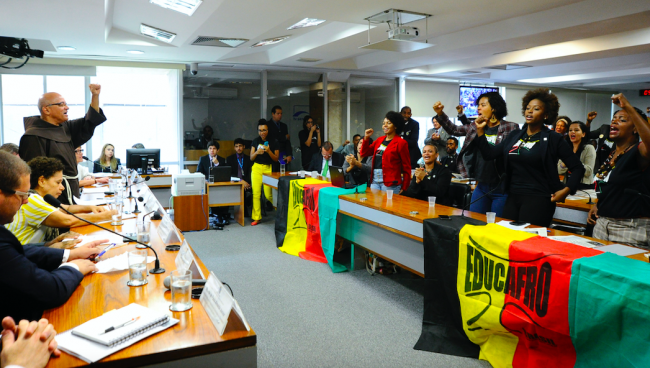 On the same day as the Zumbi March, the government created the Interministerial Working Group for the Valorization of the Black Population (GTI). The body was composed of eight civil society members linked to the Black movement; one representative each from the ministries of Justice, Culture, Education, Health, Sport, Planning, Foreign Affairs, and Labor; and one member each from the president’s Strategic Affairs Secretariat and Social Communication Secretariat, all appointed by the president. In this respect, the composition of the GTI was favorable to the state, which held the majority of seats. The body, which commenced operation in 1996, also received criticism for lacking competent technical capacities that would enable it to act on its commitments. It also lacked adequate infrastructure and budget.

Cardoso, in office from 1995 to 2002, also created other groups, such as the Working Group for the Elimination of Discrimination in Employment and Occupation (GTEDEO), established in 1996. Although politically these groups amounted to little of consequence, their emergence as new channels for communication and dialogue signaled—and strengthened—the penetration of organized civil society via Black movements into the state’s administrative political structure. Their creation demonstrated that it was indeed possible to guide the Brazilian state with respect to racial inequalities and society’s veiled racism. This context, combined with the Black movement’s ongoing struggles and intensified confrontations around race, led the government to contemplate affirmative action policies for the first time in Brazil’s history.

Later, in 2001, the meeting of the World Conference against Racism, Racial Discrimination, Xenophobia and Related Intolerance in Durban, South Africa strengthened the discussion in Brazil on the need for affirmative action to ensure access to public higher education for Black people. At the time, Black students represented only 22 percent of the student body in public and private institutions in Brazil, according to 2001 data from the Institute of Applied Economic Research (IPEA). As it gained prominence, the debate became part of the country’s political agenda.

Following the election of Luiz Inácio Lula da Silva in 2002, pressure from Black movements spurred the creation of the Special Secretariat for Policies to Promote Racial Equality (SEPPIR). In his official discourse, Lula, like Cardoso, acknowledged the realities of racial discrimination and inequalities. This marked a break from the country’s prevailing narrative of racial democracy. In another break from previous governments, Lula’s administration sent a new bill to Congress in 2004 that proposed to reserve spots in federal public higher education institutions for students coming from public schools, especially Black and Indigenous students. The move spurred on national public discussions about racial issues like never before. Intellectuals, activists, scholars, and society at large began to align themselves with the federal government’s initiatives.

The draft legislation, officially called Bill 3627/2004, was primarily social in nature, proposing to reserve 50 percent of vacancies in federal higher education institutions for public school graduates, with a minimum number of spaces—proportional to the population—reserved for self-identified Black, Brown, and Indigenous students. Yet, the topic that dominated coverage of the bill in the Brazilian press was that the law would create quotas in public universities specifically for Black students. As João Feres Júnior has noted, the affirmative action debate was often reduced to, and conflated with, this singular issue.

The debates surrounding racial quotas in Brazil were heated because they challenged the reigning Brazilian myth of racial democracy. Although Bill 3627/2004 did not become law, public universities began implementing their own affirmative action policies in the early 2000s, beginning with the two state universities of Rio de Janeiro in 2001. Heightening the debate, a lawsuit challenging the University of Brasília’s racial quotas, implemented in 2004, went all the way to the Federal Supreme Court. In a historic 2012 session, the court unanimously upheld the constitutionality of reserving vacancies in public universities based on racial criteria. The decision marked a political milestone.

By mid-2012, 129 educational institutions throughout the country had adopted some type of affirmative action policy. According to a report by Tatiana Dias Silva, 52 of these higher education institutes used racial criteria in their policies and 94 used the criteria of students having attended public high schools. Among the country’s 59 federal universities, only 23 had a system in place of reserving spaces based on racial criteria, while of the 40 federal institutes and Federal Centers for Technological Education (CEFET), only five had this type of affirmative action. 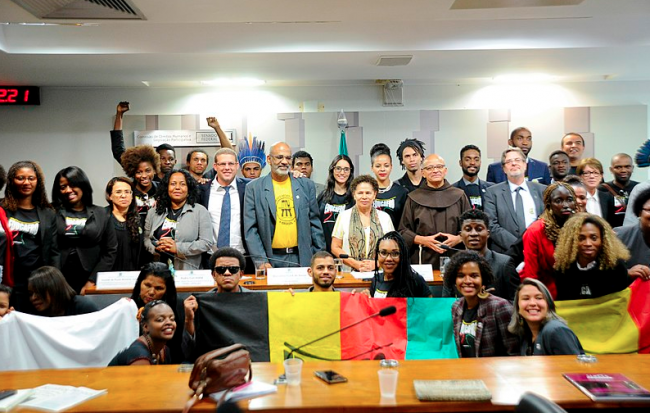 In August 2012, President Dilma Rousseff enacted legislation making it mandatory for federal higher education and technical institutions to reserve places for Black, Brown, and Indigenous people, public school graduates, and low-income students. Law 12.711/2012, known as the Quota Law, mandated that, for 2013, at least 12.5 percent ​​of spaces in these institutions had to be reserved. Over a maximum period of four years, that percentage would increase progressively until reaching 50 percent of the total number of spaces offered.

From its very origins, the Quota Law urged federal universities and institutes to adopt racial access criteria. This resulted in a 225 percent increase between 2012 and 2014 in the portion spots reserved for Black, Brown, and Indigenous people, according to an evaluation by Verônica Toste Daflon, João Feres Júnior, and Gabriella Moratelli. By 2016, the deadline for reaching compliance with the law, the percentage of vacancies reserved for people of color had seen a significant increase. Analyzed by region, by 2016, the percentage of vacancies reserved for Black, Brown, and Indigenous students approached the representation of these groups as a proportion of the population, according to a subsequent evaluation by Poema Eurístenes, João Feres Júnior, and Luiz Augusto Campos.

Numerous studies have assessed and quantified the importance of the Quota Law. Adriano Souza Senkevics and Ursula Mattioli Mello, for instance, analyzed data from the Higher Education Census and the National High School Exam (ENEM) to detail the student profile at federal institutions before and after the introduction of quotas. They found that in 2012, before the Quota Law came into effect, 55 percent of students entering federal institutions had graduated from public high schools. In four years, that number jumped to 64 percent.

Dyane Brito Reis is Associate Professor III in the Center for Arts, Humanities and Letters at the Federal University of Recôncavo da Bahia (CAHL/UFRB) and Professor in UFRB’s graduate program in Social and Territory Policies. She holds a PhD in education.

José Raimundo Santos is Adjunct Professor in the Center for Arts, Humanities and Letters at the Federal University of Recôncavo da Bahia (CAHL/UFRB) and a tutor with PET Afirmação (Tutorial Education Program). He holds a PhD in social sciences with a focus on sociology.