As the government closed a new agreement with the International Monetary Fund, Argentine society revisited painful memories from its biggest financial crisis in recent history. 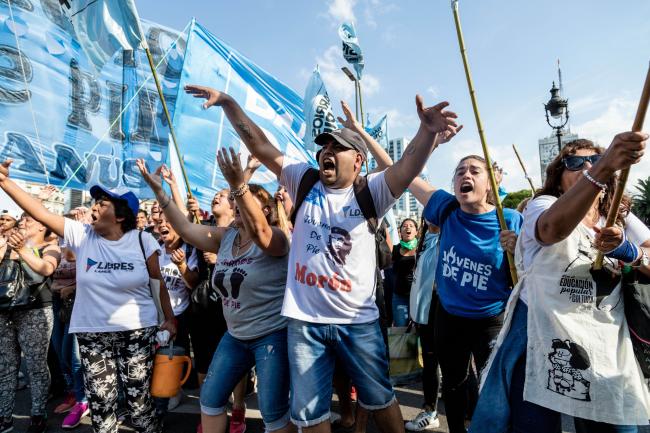 Juan Bravo did not realize when he entered the Caraza Shopping Center on December 19, 2001 that his world was about to change. December in the southern area of Greater Buenos Aires was never an easy month: the typical Argentine queues in front of ATMs and supermarkets had been joined by long lines of people of all ages and trades waiting for a meal at the comedores, community spaces organized for poor people to eat.

But when Juan and his family left through the mall’s automatic doors, only a few hours after entering, they saw not the daily dissatisfaction they were used to but an eruption of anger against the deeply rooted economic and political degradation.

December 2001 marked the worst economic crisis in Argentina’s recent history. The barricades that Juan saw that day were the start of an upheaval that would last for days. “La Crisis del 2001,” as it was called, remains etched in the memory of everyone living in the country at the time.

In early December that year, the government had frozen all USD bank accounts and restricted the withdrawal of money in ATM's to only 250 pesos per week due to a lack of monetary liquidity. In previous years, Argentina had sustained a policy called “currency convertibility” that maintained the value of one Argentine peso equal to one dollar. But the reserves in the Central Bank did not match this monetary fiction. As a solution, taking loans became a systemic public policy, but without any plan for how to later address that debt. The country was enmeshed in an official Ponzi scheme that involved international and local organizations, investment funds, and banks. The ATM limits were the final straw and became known as “El Corralito,” a name since used to describe similar situations around the globe.

The corralito and general despair provoked strikes and protests that soon turned into widespread civil unrest and looting. In a decision that would define the course of his government, President Fernando de La Rúa declared a state of emergency on December 19. Twenty-four hours later, as rocks hit the roof of the presidential palace, De La Rúa would resign and leave the Casa Rosada. But by then the explosion had spread throughout the country. In the country's second city Córdoba, the poor suburbs of Greater Buenos Aires, and the small towns of Patagonia and the Atlantic coast, protesters flooded plazas, fought against police repression, and barricaded streets. Across Argentina, a chant against politicians rang out: “Que se vayan todos, que no quede ni uno solo” (They all must leave, let not a single one remain).

"It was surreal,” he said. “We were driving back from the mall just as we used to do every week, and there were barricades and fires on almost every street. Our area was dangerous, but this was something else, something big." What he was experiencing was the collapse of a whole country, with riots that would end in 39 deaths.

According to INDEC, the unemployment rate at the end of 2001 was around 23 percent and 40,000 companies had shut their doors since the deepening of the crisis in 1998. The economic plan of then-president Fernando de La Rúa provoked the worst economic crisis Argentina had seen.

Argentinians remember that December as marked by the incessant noise of banging pans in protest. On December 19 and 20, police brutality in response to the protests reached its peak: 39 people were killed and hundreds hurt. After his resignation, De la Rúa was succeeded by five presidents in less than two weeks. Then, on December 22, President Rodriguez Saá announced Argentina’s default to the International Monetary Fund (IMF). External debt payments ceased—postponed until the economic situation improved—and the government agreed to pay local creditors. 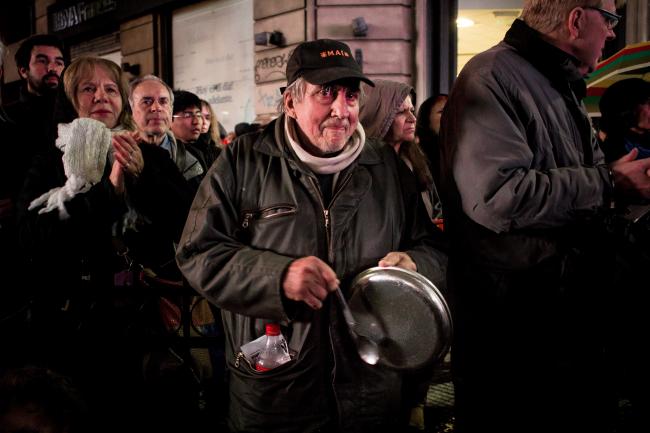 The impacts of the crisis, however, continued for many years, and it was not until 2005, when President Néstor Kirchner announced the payment of the remaining IMF debt, that Argentina’s economy began to recover. Over the next decade, Argentina’s economy expanded, achieving some of the best wages in the region by 2015.

In 2018, the Macri government signed a stand-by agreement for over $44 billion dollars with the IMF, that required Argentina to pay the loan within five years. It was the largest agreement in the history of the IMF and the world’s biggest loan in the history of foreign debt. But the money Argentina received wasn’t invested in developing the country. According to economists of Argentina's Central Bank and even the Fund itself, a considerable part of the money that the IMF gave the Macri administration was moved to offshore accounts—Argentina ranked third among the Pandora Paper nations—rather than investing in social programs that could help stabilize the country and put it on the track of economic development, as Macri had promised.

A CEPA report published in December 2021 indicated that Macri’s “unusual” agreement with the IMF played a key role in the crisis that continues to burden Argentine society. Contrary to the IMF's own bylaws, the money that Argentina received was not invested locally but instead used to finance capital outflows, harming the domestic economy. But mainly, the report states that these disbursements qualify as an “unprecedented support” to the Macri administration, funding the administration’s campaign to stay in power beyond 2019, with little thought for the country’s well-being. “The repayment structure signed in the 2018 agreement was always, under any point of view, unpayable for the country,” reads the report.

In October 2019, Macri lost the presidential election to Alberto Fernández, former chief of staff to President Kirchner, who in 2006 settled the debt with the IMF in a gesture of national sovereignty. Fernández chose former president Cristina Fernández de Kirchner as his vice president. The public was hopeful that the Fernández-Fernández government would resolve the country’s difficult economic situation and address its debt, but barely 100 days into their mandate, the pandemic hit, causing poverty to rise to 40.6 percent.

Since Fernández was elected, his economics team has worked to reframe the debt with the IMF and create an agreement that allows financial growth for the country. In March, both parties announced that they had reached common ground and the agreement was approved by the Argentine Congress.

The agreement postpones the payments for four years, giving the administration more flexibility to manage the growth without being focused on its deadlines. It includes a downward path for the country's primary fiscal deficit, progressive and positive economic growth, and policies aimed to reduce inflation, among others. It also includes regular access to external audits and visits from the IMF.

But the consensus has also been criticized both inside and outside the governing party, and protests took place outside Congress during the debate. Critics argue that this type of agreement with the IMF has only harmed Argentina’s economy and sovereignty in the past, and this time will be no different. As a result of the IMF’s requirements, the country already faces increases in household utilities.

The Fund's board has made public the agreement approval and announced that Argentina would receive $9,600 million as an advance of the new deal. The country is also authorized to use new dates for its first two debt maturities without entering into default.

A Story Repeated Too Soon

December 2021 was the 20-year anniversary of the events of late 2001, and although the role of the state has changed since the 2001 neoliberal administration, the agreement with the IMF represents, once again, a heavy toll on Argentina's economy.

The economic growth between 2005 and 2015 strengthened the middle class. But, since 2016, the successive devaluations and the pandemic have threatened the domestic economy, and  the average income has decreased from $584 to $323 in five years.

But Bravo, who is now a professor of political science at secondary schools, remains optimistic.

“In 2001, the McDonald's in Lomas de Zamora downtown used to throw the food on the street, and people used to gather there to eat. And you do not see something like that happening now,” he said. During the pandemic, emergency assistance programs like the Federal Emergency  Income (for individuals) and the Work and Production Assistance (for companies) were created to combat poverty. These programs have put almost two points of Argentina's GDP directly into citizens’ pockets and national companies’ accounts.

But so far the new IMF agreement has raised the cost of utilities and gasoline and contributed to an 8.8 percent rate of inflation in the first two months of 2022. Bravo enters school every morning glad that his students are spared the turmoil of 2001. But whether his optimism plays out remains to be seen.

Juan José Relmucao is a Buenos Aires-based journalist, researcher and content creator who has been published in Vice News en Español, Atlas Obscura, Rest of World, and several media outlets in Argentina. In 2021 he was nominated for Thomson Foundation Young Journalist Award for a report on the communitary defense of the Environment.

Lucia Cholakian Herrera is a freelance reporter based in Buenos Aires. She covers human rights, politics and gender in Latin America.