Fires are increasing in frequency and are often intentionally set to open up lands for speculative business interests. 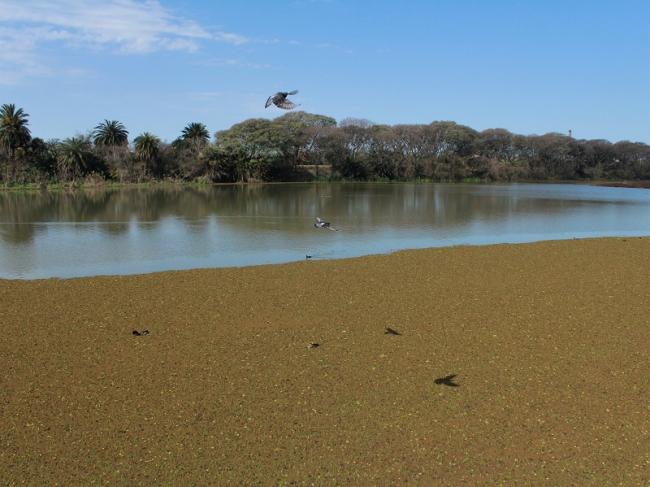 In Argentina, devastating fires are on the rise in the Paraná delta. Activists, lawmakers, non-profit organizations, and scientific institutions are advocating for a law to protect forested areas against the fires, which have been linked to speculative business interests.

Wetlands are areas with land susceptible to flooding or saturated with water for long periods of time. The Paraná, which extends over 19,300 kilometers, is one of the largest deltas in the world. It is part of Argentina’s fertile agricultural system and close to its main metropolitan areas. Hundreds of species of animals and endemic vegetation are found in the Paraná, many of which are at risk of extinction due to human activities like hunting. The wetlands are also the cultural and economic foundation of surrounding communities and cities. Since 2016, the Ramsar International Convention has designated the Paraná delta a protected area, due to its biodiversity and important role in hydrological regulation.

It may seem ironic that fires are a problem in these areas defined by water, but so far this year, hotspots were detected in more than 175,000 hectares in 13 of Argentina’s 23 provinces, according to data from NASA's Fire Information for Resource Management System (FIRMS). These figures surpass records from previous decades.

During the past months, the increase in fires, particularly in the Paraná, have impacted nearby populations, flora, and fauna. It is difficult to put out the fires once they start. Climate change and the serious draughts occurring in wet zones have created the conditions for this situation, but the problem goes further. Beyond natural causes, there is evidence that the fires are being intentionally set to deforest and clear land for speculative businesses seeking out new investments. The National Service of Fire Management in its daily reports shows that since August, 95 percent of the fires in Argentina were due to human intervention.

The problem is not limited to Argentina. The Pantanal, with 220,00 kilometers, is the largest wetlands in the world and spans parts of Brazil, Bolivia, and Paraguay. It is also in the spotlight due to the fires rapidly expanding and impacting its biodiversity. Further north, Venezuela and Colombia have been fighting record-breaking fire seasons. In all these countries, the deforested areas are being used by industries that disregard the protection of natural resources.

According to eco-feminist lawyer Belén Silva, “Sometimes it is hard to determine a single cause, you have to look at the issue from several angles. Intentional burns are a normal habit, and if they are controlled, supervised, and responsible, they can improve the territory. The problem here is that there are other interests at play, like real estate speculation, the growth of the agricultural frontier, and a whole series of factors that are added to the situation and make it worse.”

This profit-making logic is not new. Among the multi-million dollar industries that operate in the area, there is metallic extraction using aggressive tactics like fracking, monoculture grain cultivation for export, including soy, wheat, and maize, and mega-urban development projects that cover thousands of hectares along the entire river coast, such as the private neighborhoods of Nordelta, in the district of Tigre and San Sebastián, and the Pilar district. These developments have completely changed the landscape and the ecosystem. Just looking at the location of these subdivisions gives an idea of how much damage they cause.

Putting out the fires is a monumental task, and each minute that is lost is irreversible. For that reason, preventative measures are needed, beyond responding to fires after they start. One of the demands gaining public support is the passage of a wetlands law that would prioritize the protection and sustainable use of the country’s forested territories.

Since 2012, bills have been proposed that address the need to protect the rights of nature. The lack of control of what activities can be carried out in the wetlands has created the situation of frequent fires that affect biodiversity. The fires destroy everything in their path, leaving uninhabitable and dried-out landscapes, in addition to the damages of smoke in surrounding areas. In addition to providing habitat, these natural resources help create an ecological equilibrium and their excessive use has short and long-term consequences.

“Many of these consequences are not paid for by the businessmen, but by people who live nearby, by agricultural producers, and even the entire planet, due to climate change,” says Maritsa Puma, who at only 22, is an agroecological producer and representative of the Unión de Trabajadorxs de La Tierra (Union of Land Workers), a nationwide organization of peasants, families, and small producers in the agricultural sector who advocate for a model of production, consumption, and use of the countryside that does not rely on the destruction of human and natural resources.

For many years in Argentina, environmental causes were relegated as not urgent, but they are now gaining relevance, with greater media visibility and increased social and political discussions in favor of regulations to protect natural resources. In many cases, teens and young adults, like Maritsa, spearhead these political campaigns.

Last July, the Commission for Natural Resources and Conservation of the Human Environment in Argentina’s Chamber of Deputies began debating the creation of a law to regulate human interventions in wetlands. The law that is drawn up in the Commission will contemplate acceptable and unacceptable activities in those territories and penalties for non-compliance. The bill must be approved in the Chamber of Deputies and the Senate.

The Commission on Natural Resources and Conservation of the Human Environment has invited some unexpected speakers to contribute to the discussion. “The people of the territories are being given a voice,” says Belén Silva. “Sometimes the laws are imposed from above but here the peasant communities, indigenous communities, and small producers are being listened to. Even people from the real estate sectors are being listened to. That’s how you realize who is really a resident of the area and who just has an economic interest.”

Lobbying groups funded by powerful businessmen also play a role in shaping policy. That is why including the voices of the people mentioned by Belén, who do not participate in lobbying, is so important.

Regulating, enforcing, and allocating funds for a wetlands protection law would not be a cure-all for the problems that threaten these resources. As Maritsa Puma says, “I think that it is a step forward to pass a law, but it’s not the solution, we also need to encourage food production practices and other human activities to be more friendly to the environment around the wetlands.”

Individual actions of environmental responsibility can change our future, but they are not enough. State and national measures are crucial to go along with these steps. Passing a wetlands law would be the start of the process to protecting forested lands from the activities that destroy them. This is not an isolated action, but part of a long process of organizing to defend the environmental from its main enemy: capitalism that seeks financial gain at the cost of environmental destruction.

Virginia Tognola is a journalist, a militant in the Movimiento Popular la Dignidad, and an independent writer focused on politics, culture, and human and environmental rights.