Hippies and radicals have long mocked Aspen, Colorado, for its artificial grandeur amid some of the most breathtaking natural terrain in the lower 48 states. In their bookThe Slums of Aspen, University of Minnesota sociologists Lisa Sun-Hee Park and David Naguib Pellow focus their scorn on what they see as Aspen’s “nativist environmentalist” nature.

This plays out in two major contradictions. The first is what they call the “Aspen Logic,” the idea that through green consumerism, the rich convince themselves that they are environmentally conscious while ignoring the real impacts of their extravagant lifestyles—on the earth and on humans occupying lower economic strata. The second is the town’s anti-immigrant mentality and actions, while it depends heavily upon immigrants to cook, clean, and take out the garbage. 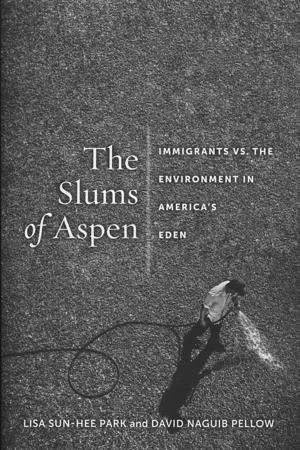 By highlighting the realities of Aspen and its environs, Park and Pellow offer a biting critique of both this exclusive, ostensibly “green” community and of the mainstream environmental movement. At times, they overgeneralize and confuse the two.

The book’s starting point and the authors’ primary example of Aspen’s nativist, environmentalist nature is a 1999 resolution from the Aspen City Council beseeching the federal government to restrict immigration into the United States by enforcing existing laws and reducing the number of legal immigrants allowed into the country each year. Park and Pellow then highlight local newspaper articles and letters to the editor, subsequent events, and interviews with local immigrants and immigrant rights advocates to build their case against Aspen.

The authors review the town’s alternately working-class, upper-class history, and past battles for the soul of Aspen. (Sadly, they leave out the most entertaining chapter: Hunter S. Thompson’s run for sheriff of Pitkin County.) They also highlight nativist strains in the environmental movement and link environmentalists with some of the more nefarious motives behind population control.

As a text for undergraduate students at a place like the University of Colorado, this is valuable reading. If you’re fairly familiar with anti-immigrant politics (e.g., if you’ve read any news over the past few years), what Park and Pellow have to say on the subject probably won’t surprise you. If you consider yourself both an environmentalist and advocate of immigrant rights, some of their conclusions will probably offend you. Generally, the authors assume that environmentally privileged, nativist Aspenites represent environmentalists everywhere.

Nevertheless, I agree with many of the authors’ points. They provide a good overview of the sharp divide between rich, white Aspen residents and visitors, and the mostly immigrant workers who serve them. In the Roaring Fork Valley, this divide is geographic—wealthier residents tend to live “up valley” in Aspen and Snowmass Village, while the immigrant workforce lives “down valley,” crowded into mobile home parks and apartments in towns like Carbondale and Glenwood Springs.

The divide is almost entirely racial—white vs. Latino. It’s sociological and economic. One Latina interviewed by the authors recounted this story about feeling unwanted in a high-price Aspen boutique:

“I went with one of my best friends to buy a sweater—a very expensive one. So when we get in there [the store], we were looking, and the lady told us, ‘Oh, that sweater is like eight hundred bucks. Do you have enough money to pay for that?’ You don’t see people like us in that kind of stores. . . . . They always think that [Latinos] don’t have enough money to spend in those stores, or just they don’t deserve to buy whatever stuff they have.”

The divide is also environmental. Within the valley, Park and Pellow point out, mobile home parks are often located in flood plains, exposing their low-income residents to an extra level of environmental risk. Open space, and perhaps more importantly in this context, the leisure time to enjoy it, are less accessible to the valley’s working poor. Of course, the Aspen ski resort’s high-priced lift tickets are out of the question for many minimum-wage-earning immigrants.

At the same time, elite visitors hash out ideas for solving world hunger and transforming the United States into a green-energy economy at the prestigious Aspen Institute, which was founded in 1950 by a Chicago businessman named Walter Paepcke. Upon visiting the town, Paepcke deemed it the perfect place for the world’s elite to leave behind the daily grind and reflect on big, humanistic ideas.

The authors promise to unmask the hypocrisy of the Aspen Logic by taking us to the heart of what they call “environmental privilege,” the flip side of environmental injustice and environmental racism. During their research, they claim to have “traveled up and down Aspen’s social pecking order,” from 2000 to 2004. They write early on in the book: “We believe that in order to understand poverty we need to go not to the ghetto but to Aspen; in order to understand the Mexican border and immigration politics, we need to move beyond the barrios and go instead to Aspen.”

But I finished the book feeling as if I spent very little time in Aspen. I met, as a reader, almost no one on the upper end of the pecking order. Instead, the authors seem to gather (and then share) their findings about the town’s nature and residents through historical digging and second-hand sources, such as letters to the editor in the local newspaper. These are not bad sources, but I would have appreciated being introduced more thoroughly to Aspen’s nativist environmentalists and the environmentally privileged, of whom the authors speak so caustically. Instead of meeting the presumed bad guys, I met a number of local Latino immigrants and social justice activists from Aspen’s neighboring, more immigrant-inclusive communities (closer to the “ghetto” Park and Pellow say they won’t visit in this book).

The authors did present the views of the co-founders of an anti-immigration group, ironically called the Valley Alliance for Social and Environmental Responsibility. However, it’s unclear how much local support or influence the group ever had. (One of the founders, Mike McGarry, ran for an Aspen City Council seat in 2001 and came in sixth place. He died in early 2012.) The authors also interviewed a few anonymous, self-proclaimed “liberals” who seemed not at all liberal on immigration issues, which was the authors’ point.

Rather than taking the authors’ word for it, I would have found it much more compelling to hear some of Aspen’s wealthy inhabitants justify their own ideas and actions surrounding the environment and immigration. There didn’t seem to be any effort to challenge these people to justify their contradictions. In fact, there didn’t seem to be much effort to even talk to them.

I don’t doubt that anti-immigrant sentiments are plentiful in the Aspen area, as they are in many parts of the country, and in nearly all service-oriented communities, which inevitably depend heavily on immigrant labor. These sentiments in Aspen are likely more latent than overt.

Park and Pellow dedicate a good chunk of the book to crafting the argument for the close relationship between environmentalism and nativism, loosely using Aspen as an example. They focus particularly on the Sierra Club and its historic, nasty internal battle between a nativist, anti-immigrant environmentalist faction and its opponents. This occurred in the 1960s and early 1970s, when overpopulation became a popular concern, thanks in large part to Paul Ehrlich’s alarmist book, The Population Bomb, which was jointly published by the Sierra Club and Ballantine Books. The club’s board of directors subsequently passed several resolutions calling on the United States to curb its population growth. Neither of the resolutions mentions anything about immigration control.

The population issue became more heated within the club in the following years, and in 1996, the club’s board adopted a resolution stating that it would “take no position on immigration levels or on policies governing immigration.” The issue continued to crop up, however, and nativists within the organization have thus far been consistently outnumbered. Notably, venerated environmentalist David Brower resigned from the Sierra Club’s board of directors in 2000 out of frustration with the club’s lack of action on population and immigration control.

Still, to date the environmental organization has remained officially neutral on the issue of immigration. Nevertheless, Park and Pellow state that “it would be incorrect and impossible to try to distinguish between the nativist or ‘anti-immigrant’ faction [of the Sierra Club] and the rest of the club.” The basis for this assertion is the club’s “long-standing love for people-less nature, including its long-term relationship with nature photographer Ansel Adams.”

Yes, the club and Adams share a love for natural landscapes free of Homo sapiens, but does that, therefore, make them anti-immigrant? The Sierra Club battles certainly merit study and reflection. But I can’t agree with the authors’ conclusions about their ultimate meaning for the mainstream environmental movement—namely, that “nativism and environmentalism [are] part of the same, broad continuum of movements.”

The authors also link the history of nativism within the environmental movement to the concept of Aspen’s environmental privilege. The premise of this link is summed up in the following paragraph, which is worth quoting at length:

If Aspen is a defining space that embodies the best of environmentalism, then much of that movement becomes wed to the condition of the privileged. Thus, environmentalism is not progressive politics but a politics of the rich and comfortable that claims progressive ideals. Mainstream environmentalism thus becomes entirely consistent with—and a close cousin of—nativism and racially exclusionary politics, and has been since the beginnings, when environmental organizations defined themselves as part of America’s white, affluent citizenry.

Therefore, to use the example of Aspen to extrapolate a conclusion about the entire environmental movement is unfair. The environmental movement is and always has had incredibly diverse motives—for example, cleaning up polluted air- and waterways, halting nuclear development, and, yes, preserving natural resources and controlling the population. The authors seem to believe it focuses primarily on these last two goals. But environmental justice is a strong and growing element of the overall movement. Aspen’s particular brand of environmentalism (if you can call it that) is just that, Aspen’s.

Finally, 13 years after Aspen’s mostly toothless anti-immigration City Council resolution, the book feels out-of-date and somewhat trivial in the face of a much changed environmental movement and much bigger battles on the immigration front. Far more serious and advanced anti-immigrant politics are at work in Arizona, Alabama, and other parts of the country that are following their lead. And while the 2012 elections surely demonstrated the rising voting power of Latinos and other minority groups, the spread of exclusionary voter ID laws across the country threaten to seriously undermine this power.

Population growth remains a sticky, but also real, environmental concern, coupled with the likely bigger problem of over-consumption by the world’s upper strata. I believe the environmental movement—at least some important strands of it—are focusing ever more on the latter as climate change threatens our very existence. Are there contradictions within this movement? Of course.

Perhaps as these issues morph, The Slums of Aspen will be seen as an important scholarly contribution to the history of immigration and environmental politics in this country. On a micro level, it is so today.

Jill Replogle is a reporter for the public radio collaboration Fronteras Desk, and is based at KPBS in San Diego, California. She has been reporting on Latin America and environmental and social justice issues since 2001.