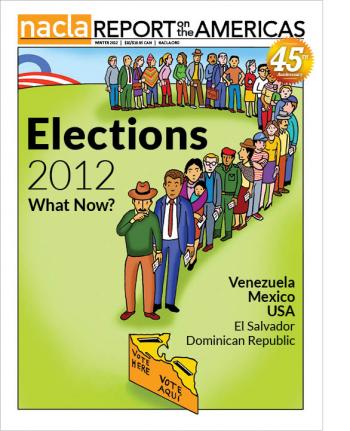 There was no single message to be culled from the region’s 2012 election results. Elections held in five American countries did, however, suggest the shapes of some alternative American futures. The voters have spoken. What now? Elections held in five American countries this past year raised some tantalizing questions and suggested some possibilities—some hopeful and some discomfiting—for the shape of the Latin American and inter-American future.

Taking Pleasure in the Republican Scramble
Greg Grandin
Schadenfreude might have been the most overused word in the weeks that followed President Obama’s reelection; understandably so since anyone who lived in fear of the party of rape, racism, rapacity, Rand (Ayn and Paul), and Rove could take great pleasure in the right-wing post-mortem of Mitt Romney’s losing campaign. Personally, I’ve enjoyed reading what Republicans think they should do with Latinos.

Puerto Rico, Now! On the Road to Self-Determination
Michael González-Cruz
The general elections of November 6 in Puerto Rico presented a great challenge to the national liberation movement. Through the work of the political action committee ¡Boricua ahora Es! (Puerto Rico, Now!), we succeeded in uniting nearly all the political tendencies of the country with the goal of ending our colonial-territorial status with the United States.

Bolivia and the Changing Shape of U.S. Power
Ethan Earle
November 2011, Bolivia and the United States signed a “framework agreement” to resume diplomatic relations, more than three years after President Evo Morales ejected the U.S. ambassador on charges of conspiracy. In contrast to the diplomatic breakup, which made international headlines, the reconciliation, held in Washington and presided over by a Bolivian vice minister and a U.S. under secretary, was sparsely covered in the news media.
‘Like a War’: The New Central American Refugee Crisis
Noelle K. Brigden
Since Central American refugees began moving to the United States during the civil war period of the 1980s, the migratory route through Mexico has been dangerous. Now, however, the violence threatening migrants extends throughout Mexico, not just at the borders. Criminal gangs have made a business of targeting migrants, kidnapping them, and demanding that they and their smugglers pay tribute for crossing their territory.

Our Stories Give Us Power: Working for Justice at the Grassroots
Jen Rock
After September 11, 2001, the U.S. immigration system went through a huge transformation. As a result of these changes, the immigration system became even more cumbersome than it already was, and significantly more resources were dedicated to enforcement—specifically immigrant detention and deportation.

A Dissenting Opinion: Interview With Margarita López Maya
Fred Rosen
In an interview, the prominent Venezuelan activist and sociologist talks to NACLA about why she keeps a critical distance from both Chavismo and the opposition.
Celebrating the Election in an Indigenous Village (Photo Essay)
Zoë Clara Dutka
These photos were taken in Santa Elena de Uairen, on Venezuela’s southeastern border with Brazil. This region is home to some of the largest communities of Pemón indigenous people in the nation. Polls were set up even in the most far-flung communities, with international witnesses present. Chávez won by substantial margins in almost all of them.

Chávez and the Intellectuals
Daniel Hellinger
An informal group of Venezuelan intellectuals have been expressing the fear that Chávez’s “hyper-leadership” may be threatening the gains of Chávez’s own Bolivarian Revolution.
Democracy, Elections, and Venezuela’s Bolivarian Revolution
Gregory Wilpert
The Chavista emphasis on elections, and in winning them by large majorities, has its roots in a number of factors, including the desire to give legitimacy to Venezuela’s transition to “socialism of the 21st Century.”
Dominicans, in Three Continents, Go to the Polls
Ramona Hernandez
For the first time, Dominicans living abroad have been able to elect candidates of their own to serve in the Dominican Chamber of Deputies.
El Salvador’s 2012 Legislative Election: Implications and Opportunities
Esther Portillo-Gonzales
Despite last year’s mayoral losses, the FMLN remains El Salvador’s leading political force, holding the presidency, 31 seats in the National Assembly, and governing 96 municipalities.
Elections in Venezuela and Pennsylvania: Lessons in Democracy?
Robin Alexander
The contrast between manipulative politicking in the author’s home state of Pennsylvania and the openness of the electoral process she witnessed in Venezuela is striking.
Elections, Imperialism, Socialism, and Democracy: Coups and Social Change in Latin America
Stephen Maher
The recent coups in Honduras and Paraguay reveal the built-in limits of the electoral path to social transformation.
Light and Darkness at the End of the Tunnel: Immigrants in the Aftermath of Obama’s Reelection
Joseph Nevins
Whether voters liked it or not, a vote for Obama was a vote for the status quo on immigration policy. It was a vote for the current Democrat-Republican consensus on immigration reform.
Mexico’s Labor Movement After the Elections: A House Still Divided
Dan La Botz
The Mexican elections of 2012 sent a disheartening signal of defeat to the country’s working population. Regressive labor-law reform is now on the horizon.
Stubbornness and Blindness: Understanding Mexico’s Neoliberal ‘Transition’
Adam David Morton
Mexican elections have not been known for their transparency. Last July’s election that returned the PRI to the presidency was no exception. A significant part of the politically active public has yet to recognize the official result.
Truncated Transnationalism: The Migrant Vote in the 2012 Mexican Presidential Election
Adrián Félix
With dual citizenship now a possibility, many Mexican Americans have taken an active interest in Mexican elections.
U.S. Elections and the War on Drugs
Coletta A. Youngers
At the very least, we can hope that Obama, in his second term, will show greater tolerance for the debate on drug-policy alternatives that has blossomed across Latin America.

Aspen Logic
Jill Replogle
Hippies and radicals have long mocked Aspen, Colorado, for its artificial grandeur amid some of the most breathtaking natural terrain in the lower 48 states. In their bookThe Slums of Aspen, University of Minnesota sociologists Lisa Sun-Hee Park and David Naguib Pellow focus their scorn on what they see as Aspen’s “nativist environmentalist” nature.
New & Noteworthy
Catesby Holmes
The general—though far from universal (remember Honduras’s 2009 military coup?)—“opening up” of Latin American society has produced an explosion of scholarly literature on social inclusion in the region. This essay reviews four recent books examine the tactics, achievements, and challenges of women, indigenous peoples, Afro-descendants, and LGBTQ communities as they shoulder their way into the Latin American political sphere.
The Rise of ‘Horizontalism’ in the Americas
John L. Hammond
According to the two authors reviewed here, a new kind of social movement is arising in several Latin American countries. These new movements are nonhierarchical, territorially based, and autonomous—they tend to reject involvement with the state (though not absolutely); instead they propose to solve their problems of survival with their own resources.

Reporting on Romer’s Charter Cities: How the Media Sanitize Honduras’s Brutal Regime
Keane Bhatt
“Charter cities” have been promoted for  years by Paul Romer, a University of Chicago–trained economist teaching at New York University. But the applicability of Romer’s radical vision in Honduras always depended on the enthusiasm of the authoritarian, post-coup government of Porfirio Lobo.

Central American Migrants on the Perilous Journey North (Photo Essay)
Encarni Pindado
For Central Americans seeking to migrate to the United States, the journey across Mexico is fraught with peril. These photos document some of the dangers they face.
The U.S. and Ecuador: Is Intervention on the Table?
Nancy Hiemstra
Over the last decade, the United States has come to view Ecuador as a security threat for the entire Western Hemisphere. The growing population of undocumented Ecuadorans in the United States has been accompanied by the development of internationally connected human smuggling operations in Ecuador.

NACLA as Coalition
Brady Tyson
This essay was written by one of the founders of NACLA in 1967, as NACLA was debating its future and forming its identity. It appeared in the second issue of what was then called the NACLA Newsletter.