This essay was written by one of the founders of NACLA in 1967, as NACLA was debating its future and forming its identity. It appeared in the second issue (vol. 1, no.2) of what was then called the NACLA Newsletter. Tyson’s brief discussion of the debates among the early Naclistas tells us as much about the world and the U.S. left in the 1960s as it does about the origins of NACLA. It is also interesting to note the presence of the same debates—with perhaps a distinct style, vocabulary, and discourse—that we all enter into today. As we reach the end of our 45th anniversary year, and move into a new setting, it is worth remembering our roots in a somewhat different world. 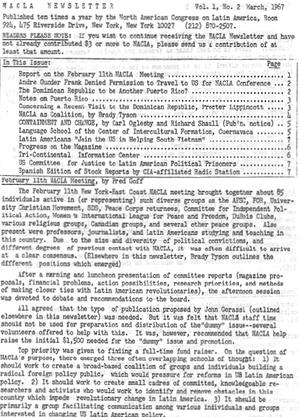 From the beginning, several distinct groups have consciously tried to work together to create NACLA. Organizationally, the prime movers were SDS and University Christian Movement personnel. Also participating were new Peace Movement people, “traditional” pacifists, left-Catholics, labor movement people, returned Peace Corps Volunteers, and various young professors and graduate students. SNCC has been interested and participated from the beginning. Many people can be identified with several groups, or with no particular group.

Because of this diverse background, NACLA has developed what Steve Weissman has called a “pragmatic approach,” or a “popular front.” All of us work together in what Bill Rogers at Cornell called in a statement made at the February 11 meeting at NYU, a series of “uneasy alliances.” But, as Bill went on to say, these alliances are not based on suspicion but on honest differences in opinions and/or attitudes. And they need not be disruptive but can perhaps provide the creative stimulation needed to force the birth of a radical, new conceptual framework for the study of Latin America.

For instance, there are some of us in NACLA who are convinced that “violence is reactionary” (Glenn Smiley), while others hold that there is no hope for Latin America except through a violent, social revolution. Some feel that the major task is to educate the American public, or to create a radical alternative to present attitudes and policies. A few feel that it is legitimate and helpful to appeal to officials in the establishment in the hope of modifying some policies. Still others look upon NACLA as a way to form a cadre for the radical re-organization of American society, since “there is apparently no public conscience in the United States that can be appealed to” (Mike Locker). Some are most interested in establishing alliances and conversation with the Latin American revolutionists to help them make their own revolution, while others feel that the Latin American revolution is largely contingent upon some form of revolution in the United States.

At the New York meeting in February, a Latin American (Paulo Singer) insisted that a new, general theory of imperialism and the Latin American situation must be a high priority, and disagreed with the tendency among American scholars to multiply monographs that deal with specific and limited aspects of the overall problem. John Gerassi is interested in a “non-academic” magazine that will report what is now absent from U.S. news media, and that will carry interpretative articles by North and Latin Americans. Many of the young professors and graduate students are interested in coordinating “independent research” of the type that the establishment is not likely to fund.

Further, we have the tensions between the “Christers” (Catholic and Protestant) and those who have no particular religious motivation. There is also an occasional “conflict of generations” in NACLA. There is a difference in emphasis between the academically and the agitationally oriented, and between those who are interested in dialogue with all sectors (as exemplified by Brazilian Archbishop Dom Helder Camara) and those who are convinced that talking with some people is a waste of time.

As long as the essentially associational nature of NACLA is remembered, and it is conceived as a forum and not as a movement, these differences can contribute to a common, deeper understanding of U.S.-Latin American relations and can aid in defining common action projects. In coming together in NACLA it is hoped that now and then groups with specific interests will “spin-off” and form their own groups. Perhaps such groups can and will stay in NACLA also. And perhaps NACLA will find unanimous or near-unanimous opinion on specific problems as they arise. Until something better appears, it seems to me that NACLA affords a good opportunity for study, action and dialogue among those of us who are committed to the liberation of Latin America from North American imperialism, and the preservation of the integrity of Latin American culture.