In 1960, Fidel Castro declared that “Cuba’s example would convert the Andean Cordillera into the hemisphere’s Sierra Maestra,” referring to the mountains in eastern Cuba that served as the guerrillas’ base during the revolutionary war.1After seizing power from U.S.-backed dictator Fulgencio Batista, Cuba’s revolutionaries actively promoted “continental revolution” to destroy the network of military states that constituted the U.S. empire in Latin America, and eliminate the capitalist order that sustained them.

Armed revolution has long since subsided in Latin America, but over the past decade the revolutionary vision of sovereign, socialist development has resurfaced—though in modified form. The success of Venezuela’s Bolivarian Revolution, followed similarly in Bolivia and Ecuador, has again raised the banner of socialism and regional independence, but this time through electoral means. For Latin Americans pursuing social change, Venezuela, rather than Cuba, has become the model to follow. 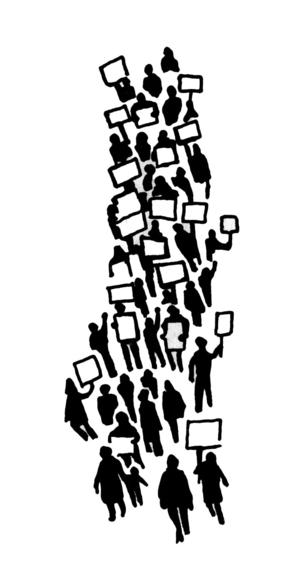 The Cuban revolutionary model was based on complete social and institutional reconstruction, which entailed the total destruction of the existing state apparatus. Only such a radical approach, the revolutionaries believed, could prevent the region’s tremendous wealth from continuing to flow into the pockets of multinational corporations and their local oligarchic allies who, together with the U.S. government, worked to perpetuate a social order that relegated millions to lives of desperate poverty.

The Venezuelan model has taken a significantly different course. In stark contrast to the Cuban method, the governments of Venezuela, Bolivia, and Ecuador—not to mention a decidedly leftward turn in many of the region’s other governments—have used existing electoral mechanisms and state apparatuses to compel the capitalist social order and its beneficiaries to make compromises with the masses of the poor.

The achievements of these regimes have been considerable: In Venezuela, for example, the Chávez government succeeded in cutting the poverty rate in half in just five years (2003–08), while extreme poverty was reduced by 72%.2 Furthermore, these governments are the leading voices in a growing chorus of opposition to U.S. hegemony, objecting in particular to the neoliberal “Washington Consensus” developmental model that has aggravated social inequalities and produced the worst long-term economic growth in a century.3

But in each case, capitalism remains alive and well—in fact, healthier than ever—though the national wealth is distributed more equitably and political participation broadened.4

And although the new “revolutionary” regimes have accomplished a great deal, the electoral approach to social change has inherent weaknesses that the United States and its allies have shown an increasing ability to exploit. Following a template designed to counteract the new revolutionary model, the U.S.-backed coup in Honduras in 2009 and the recent impeachment of Paraguay’s President Fernando Lugo highlight some of the difficulties of pursuing progressive social change through existing state structures.

After having signed the Washington-backed Central American Free Trade Agreement (CAFTA), Honduran president Manuel Zelaya began to move closer to the socialist camp, joining the Venezuelan-led Bolivarian Alliance for the Americas (ALBA) in 2008.5 Then, on June 28, 2009, Zelaya was kidnapped by the military in the middle of the night and removed from the country.6 While most of the world denounced the coup, the Obama administration did everything it could to assist the culprits. Though the administration admitted it knew of the plot in advance, Washington refused to officially condemn it as a “coup,” which would have legally required the full cessation of aid. Though the coup leaders justified their actions by falsely claiming that Zelaya was illegally attempting to extend his presidential term, diplomatic cables released by WikiLeaks reveal the classified judgment of U.S. Ambassador to Honduras Hugo Llorens: It was an “open and shut case” of an “illegal and unconstitutional coup.”7 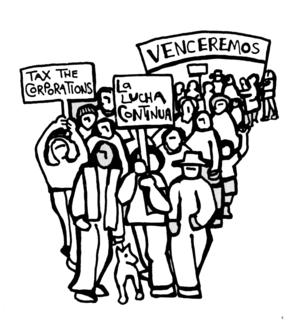 Again, while the entire region and much of Europe repudiated subsequent sham elections, Washington instantly recognized the “victory” of Porifiro Lobo and pressured multilateral organizations to readmit Honduras.8 Honduras has since been transformed into a raging hurricane of violence and intimidation, with the highest homicide rate in the Americas. Chief among the victims have been journalists, human rights advocates, dissidents, politicians, and campesinos fighting for land reform.9 Meanwhile, Honduras’s new leaders seem intent upon using the country as a laboratory for far-right experimentation, including proposing the construction of “model cities” under the control of private companies and financed by a U.S.-based venture capital firm, in which constitutional rights and labor protections would be permanently annulled.10 Alongside such enlightened and progressive measures, U.S. military and other assistance to Honduras has grown under the guise of the “War on Drugs.”11

Predictably, right-wing elements throughout the region took note of the success in Honduras and were encouraged to follow suit: In September 2010, leftist Ecuadoran president Rafael Correa barely survived a similar attempt.12 Zelaya’s overthrow has inaugurated a new template for coup making designed to exploit the inherent weaknesses of the electoral revolutionary approach, which relies on existing institutions and procedures for legitimacy. As Argentine president Cristina Fernández de Kirchner said, “It would be enough for someone to stage a civilian coup, backed by the armed forces, or simply a civilian one and later justify it by convoking elections. . . [T]hen democratic guarantees would truly be fiction.”13 As she feared, a similar blueprint has now been implemented in Paraguay, where the removal of president Lugo again highlighted the difficulty of using existing electoral processes to bring about deep social change.

Paraguay has long been one of the most unequal countries in the hemisphere, with among the highest concentrations of land ownership. In 2008, after 61 years of rule by the right-wing Colorado Party, just 2.6% of landowners owned 85.5% of the land.14 That year, the party’s six-decade rule came to an end with the election of Fernando Lugo, a Roman Catholic bishop supported by Paraguay’s poor majority.15 Lugo refused to accept the presidential salary because it “belongs to more humble people.”16 He instituted free health care for the poor in public hospitals, supported low-income housing programs, cash transfers for the desperate, and tried to advance other modest social reform.17 But even these limited measures proved too much for Paraguay’s tiny class of fabulously wealthy oligarchs and their Colorado Party representatives, who relentlessly blocked his proposals for land reform.18 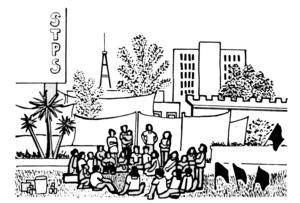 Then on June 15, 2008 100 landless peasants took matters into their own hands and occupied lands illegally seized by one of the wealthiest men in the country, who is also a member of the Colorado Party. When 300 police officers descended on the farm and the peasants refused to leave, an eight-hour gunfight ensued in which 10 campesinos and seven police officers were killed.19 Lugo immediately condemned the incident, and the minister of the interior and the police chief resigned. In a last-ditch attempt to preserve his position, Lugo replaced these officials with Colorado Party members, thereby effectively surrendering control of the repressive state apparatus and galvanizing the Liberal Party against him.20 The Colorado Party then drew up articles of impeachment accusing Lugo of “encouraging land seizures and fomenting violence,” and he was given 24 hours, notice of the proceedings, in which he would have just two hours for his defense.21 On June 21, the Chamber of Deputies voted 76 to 1 to impeach, and the next day the Senate voted 39 to 4 for the same.22

Before the final vote, all 12 foreign ministers from the Union of South American Nations (UNASUR) traveled to Paraguay to insist that the move to impeach Lugo violated UNASUR’s democracy clause. Brazil’s moderate president Dilma Rouseff proposed suspending Paraguay from both UNASUR and MERCOSUR (the regional trading bloc of Southern Cone states), both of which did so soon thereafter. Argentina’s Fernández de Kirchner, the Dominican Republic’s Leonel Fernandez, Bolivia’s Evo Morales, Ecuador’s Correa, and Cuba’s Raúl Castro announced they would not recognize Franco as President. ALBA, the socialist bloc of Latin American countries, issued a statement condemning the act as a coup. Even Colombia, Chile, and Mexico, the few remaining pro-U.S. conservative bastions, criticized Lugo’s removal. Bolivia, Cuba, Venezuela, Ecuador, Brazil, Argentina, Chile, Colombia, Peru, and Mexico all recalled their ambassadors. But, in an ominous echo of Honduras, as the entire region denounced the obvious chicanery, the United States stood behind Paraguay’s reactionary feudal oligarchs. As the State Department put it, “As a general matter, we haven’t called this a coup because the processes were followed.”23

Despite the justice in Lugo’s goals, he was unable to marshal the existing state apparatus to challenge the power of the oligarchy and achieve the social transformation that is so desperately needed in Paraguay. The reactionary forces that dominate both the existing social formation and state institutions are formidable and have demonstrated an unwillingness to permit even modest changes to the status quo while the United States stands solidly in support. This backing was made possible, in part, by the oligarchs’ ability to turn the very mechanisms on which Lugo based his legitimacy against him.

The historic solidarity against Lugo’s removal is encouraging, and a clear message to the United States that times have changed. Still, it is hard to take this defeat as anything other than what it clearly seems to be: an indication of the shortcomings of relying on existing structures to bring about fundamental change in deeply ingrained social inequities, especially in cases where progressive forces do not control an overwhelming majority in representative bodies. In Venezuela and Bolivia, for instance, such majorities have enabled wider institutional rearrangements, including the drafting of new constitutions, seemingly impossible in Paraguay. This means that the landless peasants and indigenous organizations, so long the subjects of brutal state repression and social exclusion, could be more promising bearers of social progress than those operating within the state, however well-intentioned the latter may be.

The peasants courageously occupying land under the slogan “Occupy, Resist, Produce,” risked—and lost—their lives in direct action against a grotesquely unjust social order. Though few tears have been shed for them, they are the true revolutionary martyrs, not Fernando Lugo. And unless the feudal barons and their Colorado Party guardians sense the shifting direction of the winds, and permit the changes that are so clearly necessary through electoral means, they may find themselves visited by the specter of Che Guevara: the swift and brutal fire of revolutionary justice.

Stephen Maher is a political theorist and Ph.D. candidate in political science at York University in Toronto, Canada. His work has appeared in the Monthly Review, the International Socialist Review, the Guardian, and elsewhere. He blogs at rationalmanifesto.blogspot.com.

2. Mark Weisbrot, “Venezuela in the Chávez Years: Its Economy and Influence on the Region,” in Thomas Ponniah and Jonathan Eastwood, The Revolution in Venezuela: Social and Political Change Under Chávez, eds., (Harvard University Press, 2011), 193–223.

7. Confidential Cable from Ambassador Hugo Llorens in the U.S. Embassy in Tegucigalpa to Washington, D.C., 2009-07-24.