Elections in Venezuela and Pennsylvania: Lessons in Democracy?


Is it fair? Will particular groups of people be excluded, disenfranchised? Will the outcome of our next presidential election really reflect the will of the people? These are some of the questions we have been asking recently in Pennsylvania about our state’s strict new voter-registration law, which requires the presentation of extremely limited types of photo identification in order to vote.1 Michael Turzai, Pennsylvania RepublicanHouse Leader, euphorically characterized the new law: “Voter ID, which is going to allow Governor Romney to win the state of Pennsylvania—done.”2His comment underscored both the law’s partisan nature and its inherent unfairness, leaving me pondering the question: What should a democratic election look like? 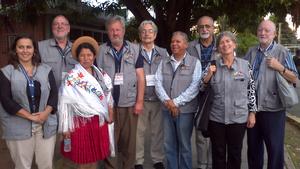 Fortunately, I had the opportunity to travel to Venezuela for the October 7 presidential election as part of an international delegation of 245 people to take a very close look at their election. I had done some reading before I left and knew that former president Jimmy Carter had commented that the Venezuelan system was “the best in the world,” but was still unprepared for what I found.3

The 1999 Venezuelan constitution establishes the three branches of government that the United States has—executive, legislative, and judicial—with an additional, independent electoral branch, headed by the National Electoral Council (CNE). The president of this new branch of government is a sociologist, Tibisay Lucena, who is passionately committed to developing a process to “foster and guarantee democracy and participation, to put at the disposal of popular sovereignty the technical advances, knowledge, and skills in order to strengthen that sovereignty, which is the main source of institutional legitimation and democratic transformation.”4

Since 2008, the CNE has conducted 10 elections, including primaries for the opposition parties, indicating an unprecedented level of support for the institution. On television a few nights before the election, opposition candidate Henrique Capriles Randonski conveyed his conviction that he would win, urged his supporters to vote, and expressed his total confidence in the electoral system.

While in the United States we have been experiencing increased attempts to diminish votes among certain groups of voters—the elderly, the young, the poor, and people of color—the CNE has been implementing a massive voter-registration effort to close what it calls the gap between those eligible to vote and those who are registered. The result is that 3.5% of eligible Venezuelan voters are unregistered today, compared with 20% in 1998. In the presidential election this meant that almost 19 million Venezuelans were eligible to vote. Over 80% of them participated in the election.

A number of factors resulted in the massive turnout: First, elections take place on Sundays, businesses are closed, and those people who must work on election day, like poll workers, medical workers, and so on, are allowed to go to the head of the line. Second, the number of polling places has also nearly doubled since 1998, reaching almost 14,000, with more than 39,000 voting machines for the October 7 election, facilitating participation especially for voters in rural areas. In addition, we saw evidence of a massive education campaign, both encouraging voters to go to the polls and explaining the process.

Third, there was major involvement throughout Venezuelan society—the election was an event. Several hundred thousand people were directly involved, as poll workers who were selected at random from the voter roll by the CNE and then trained; as witnesses for the two major party coalitions at each voting machine; as technicians charged with ensuring the proper operation of the voting machines; and as security to ensure that the election was peaceful (a role performed by the military). Finally, a series of measures further encouraged thoughtful participation and security—a period of reflection before (and the day following) the election when no alcohol could be purchased, no candidates could make campaign speeches, and no one wearing clothing with a candidate’s name would be allowed in a polling place.

But beyond questions of infrastructure and logistics, this particular election served as a referendum on President Hugo Chávez’s leadership and vision for the future. Chávez’s five-point platform addressed that vision in detail, including social and economic development plans as well as commitments to national sovereignty, regional integration, world peace, and preserving life on the planet. Interestingly, the opposition vowed to continue the “missions” founded by Chávez that provide health and housing to poor communities, but to run them more efficiently. Capriles’s plan, leaked shortly before the election, revealed a much more neoliberal approach. Although Capriles denied that it represented his position, the leak resulted in the defection of some of his supporters.

All of the Venezuelans I spoke to strongly supported one candidate or the other. Capriles supporters complained about inflation, corruption, crime, and Chávez’s length of time in office. Some told me they had voted for Chávez in the last election. “Time for a change,” they said. Chávez supporters, meanwhile, told me about the new labor law that reduces the work week to 40 hours, increases and expands coverage of social security, prohibits subcontracting, makes it more difficult to discharge workers and increases penalties for unjustified discharge, and greatly expands protections for women, including the increase in postnatal maternity leave from 12 to 25 weeks, increased protection from dismissal for two years following the birth of a child, and inclusion of the feminine term for women workers throughout as well as in the name of revised law (Trabajadores y Trabajadoras). They also told me about the number of new houses that are being built, the reduction of extreme poverty, the more equitable distribution of land, and the new police academy designed to emphasize human rights and eliminate corruption. “We are not going back,” they said. All were proud of the election process and told me they didn’t think there would be violence, despite media pronouncements and rumors to the contrary.

Can technology really be foolproof? I had my doubts. However, after viewing the assembly of the voting machines, speaking with experts, learning that there are 17 audit processes, and then watching the machines in operation, I was convinced. Voting technology has improved greatly in Venezuela since 1998, when less than 35% of some 20,000 polling places were automated. Today, nearly twice as many sport fully automated machines. A Venezuelan company designs and manufactures these machines, and they have been improved over time. The newest technology used in this election was a fingerprint reader linked to a database containing the voter ID and prints of the registered voters.

A few days before the election, machines are sent out from the assembly and service plant in Caracas. They are set up and tested, and then on the morning of the election, they are tested again with the poll workers, party witnesses, and soldiers present. They are then unlocked with a code and generate a tape that indicates that no votes have yet been registered. For the rest of the day, voters follow a series of steps at stations arranged in the shape of a horseshoe: First they show their credentials to a poll worker, and then place their finger in the reader to generate their ID number and photo. This unlocks the voting machine, where they select the picture of the candidate and party of their choice and press the Vote key. The machine then spits out a paper receipt with the name of the candidate, permitting the voter to double-check that his or her vote was properly recorded. A bit further down the voter places the folded paper in a ballot box. The final steps are to dip one’s pinky in indelible ink and to sign and place a fingerprint in the registry as a final backup check.

When the polls close, 54% of the paper ballots cast are checked manually against the final tally issued by the voting machines. For me, this was the most moving part of a long and exhausting day. Along with eight other representatives from Latin America and Europe, I had visited eight other polling places in the state of Zulia, a conservative, petroleum-producing region. Despite long lines in some locations and occasional minor glitches with the machines, the day was peaceful. Of Zulia’s 4,580 machines, only three had problems that were serious enough that they couldn’t be fixed, requiring that new machines be brought in.

At the ninth polling place I visited, the final stage in the election drama played out. Before being shut down with great care, the voting machine issued its final tape of the day: a breakdown by candidate and party of all the votes that had been cast—290 votes for Chávez, 94 for Capriles, none for the other five candidates, and four null votes. Seated on tiny chairs in a grade school classroom, two young women carefully listed the names and parties of all of the candidates. Then, in complete silence, with intense concentration, the ballot box was opened and another poll worker began pulling out the small, folded pieces of paper one by one and reading the candidate and party while the young women marked the results on their master sheet. Almost 400 names later, they confirmed a perfect match. It was a tiny piece of a democratic process that was repeated in schools throughout the country.

No exit polls are permitted, so we all waited, anxious for the results of this hard-fought campaign. While history suggested that Chávez would win, the opposition clearly had many supporters, and the margin of victory would be important. CNE director Lucena reported the results at 10 p.m., within hours of the close of the election’s closing: With 90% of the votes counted, the results were 54.4% for Chávez, 44.9% for Capriles. (The final tally expanded Chávez’s margin to almost 11%.) A short time later, Capriles appeared on national TV to give his concession speech. He began by saying, “The will of the people is sacred.” Chávez later spoke from the balcony of the National Palace. “The candidate of the right and his campaign command have just recognized before the country the victory of the people. This is a very important step in building peace. … I extend to you these two hands and this heart because we are brothers in the country of Bolívar. I call to all of those who go around promoting hate, I invite them to dialogue, to debate and to work together for Bolivarian Venezuela.” “I congratulate the opposition leadership, which recognized the victory of the people,” he said.

The country did not go up in flames. The violence predicted by the media did not occur. Instead, Chávez supporters flooded into the streets of Caracas for a giant party.

Meanwhile in Pennsylvania, the new voter ID law was put on hold because the state could not ensure that all voters could obtain IDs. However, the court has yet to determine whether it will apply to future elections. And in the interim, poll workers requested identification—although not disqualifying voters who did not possess it. Confusing at best, it is far from what I experienced in Venezuela, where voting is encouraged by outreach and education, and elections are viewed as a democratic process to determine the will of the people and the future path of their country.

Robin Alexander is Director of International Affairs for the United Electrical, Radio and Machine Workers of America. She traveled to Venezuela as part of a delegation representing the National Lawyers Guild.

4. Tibisay Lucena “The Venezuelan Experience,” part of packet of materials provided to international representatives on Oct 3, 2012.