Our Stories Give Us Power: Working for Justice at the Grassroots


After September 11, 2001, the U.S. immigration system went through a huge transformation. Under the Patriot Act, signed into law a month after the attacks on the World Trade Center, the Immigration and Naturalization Service (INS), the agency that formerly handled all immigration matters, was absorbed into the Department of Homeland Security. The INS was then broken into three separate branches: U.S. Citizenship and Immigration Services (USCIS), responsible for responding to immigration petitions and naturalization processes; U.S. Immigration and Customs Enforcement (ICE), responsible for detention and removal of unauthorized immigrants; and U.S. Customs and Border Protection (CBP), responsible for regulating and facilitating trade. As a result of these changes, the immigration system became even more cumbersome than it already was, and significantly more resources were dedicated to enforcement—specifically immigrant detention and deportation. 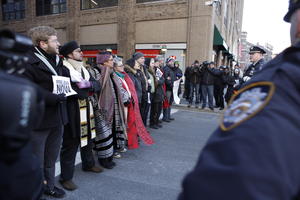 Photo by Mizue Aizeki/Families for Freedom

From 2002 through 2011, the rate of deportation increased by almost 45%, while the deportation of alleged terrorists has declined by almost 60%.1 Increasingly, the federal government has demonstrated that immigration policy will emphasize detention and deportation while it ignores the obvious need for reform.

As unauthorized immigrants continue to enter the United States, the need for comprehensive reform, which includes creating pathways to legaliza legalization, grows. Despite this need, in his first three years in office, President Obama has presided over the deportation of over 1.5 million people—more deportations than under any other president since Eisenhower.2 These deportations have resulted primarily from a new strategy: the marriage of the criminal justice and immigration systems. The already broken immigration system is now entangled with the deeply flawed criminal justice system. This trend is commonly called “crimmigration.”

In response to this state of affairs, the New Sanctuary Movement of Philadelphia (NSM) was formed in late 2007 to help immigrant communities defend themselves from “crimmigration.” In Philadelphia, NSM began to connect the city’s powerful and diverse faith communities with the immigrant rights movement. NSM is a grassroots member-based organization with adherents from both immigrant and allied communities. The group works within these faith communities by helping to provide education, skill building, accompaniment, and advocacy.

Our long-term vision for social justice is focused on the belief that all people should be guaranteed civil and human rights. Central to our vision is the belief that the leadership of any long-lasting movement for social justice must come from the affected communities themselves. Our work helps immigrant community members to build the skills, knowledge, and sense of power needed to be at the forefront of our campaigns. In addition, we are constantly finding ways to connect affected immigrant communities with allied communities to build relationships and strengthen our advocacy.

We use a variety of strategies to achieve these ends, but our principal method relies on a technique we call “storytelling.” We see storytelling as a tool not only for advocacy but also for leadership development. We do not “give voice to the voiceless.” Rather, our fundamental belief is that while all people have a voice, the immigrant voice is consistently ignored. Our work is to make immigrant voices heard.

Blanca Pacheco, a community organizer for NSM, explains it as follows: “I want my community to know there is a space where their voice is important and will be heard; where their story is important and their struggle and their rights as human beings are respected. I want my people to know that along with the racism, breaking up of families, and pain caused by a broken immigration system, there are also organizations that are fighting with us and that they care about our struggle. But I also want my community to realize that we need to join forces to achieve what we want. We are millions of people and we need to join our hands and walk together towards a real change.”

Our storytelling uses popular education models of teaching, emphasizing that we are all expert chroniclers of our own experiences. Our members and leaders come together in small, localized storytelling circles. In those circles, people meet to share their experiences, identify commonalities, identify an issue and eventually strategize how to respond. We use a participant model of storytelling that happens in the setting of an interview. The group identifies the theme the interview should address, comes up with the questions the interview will discuss, and practices interview skills. Then members of the group interview each other. The interviews are audio recorded and edited to become four-to six-minute audio pieces that can be shared in a variety of public venues. They become tools to share with wider audiences.

Leaders from storytelling circles have spoken at community forums in front of hundreds of people and elected officials, at public debates, at public hearings, as well as to print and radio news media and at press conferences, and to other allied and immigrant communities. Through storytelling circles, people take control of their story and use it to exercise their community power.

One of the challenges that the storytelling circles frequently face arises from the fact that the most commonly prosecuted felony in the United States today is “illegal re-entry.”3 One faces this charge if he or she is caught returning to the United States without legal permission, after having been deported. This means that if someone previously deported returns to the country without authorization and is stopped for, let us say, a traffic violation, that individual can be arrested and ultimately turned over to ICE, which can claim to have caught a felon. In this way, the marriage of the immigration and the criminal justice systems is creating gross violations of the civil and human rights of immigrants in the United States.

An example of “crimmigration’s” impact may be found in the personal story of a leader of the NSM. This woman’s son was arrested, transferred to two different prisons (first in western Pennsylvania and eventually in Ohio), and 22 days later was deported to Honduras. Upon being arrested by local police, he was immediately transferred to ICE custody. He was never given a day in court, neither pre-trial nor arraignment. His mother never learned what charges he faced. Although the Constitution is meant to protect the rights of all people, immigration status is a means by which those rights are denied.

When someone is arrested by a local police officer and booked at the local police station, he or she is fingerprinted. If that police department is participating in ICE’s Secure Communities program, those fingerprints are forwarded to ICE and compared with all the fingerprints ICE has on file. If that individual has interacted with ICE in the past, the agency can issue an ICE hold, requesting that local police not release the individual until ICE can come and interview or often transfer that person into their own custody. ICE is now able to rely on the resources of local police to apprehend and identify people, who can then be transferred to ICE custody.

Under the Obama administration, the Secure Communities program has expanded rapidly. Currently, Secure Communities is operating in 3,074 jurisdictions out of 3,181— 97% of the counties in the country.4 The expansion of the program has been progressing, as the probability of a comprehensive immigration reform has continued to fade.

Starting in 2009, strong grassroots resistance has been mounting against the growing “crimmigration” system. New Sanctuary Movement of Philadelphia has been a part of that effort. Philadelphia was one of the first cities to participate in Secure Communities, when it was a pilot program under the Bush administration. In the summer of 2008, grassroots community groups, including the NSM, began to see a growing crisis, in which people who were being picked up by the police were being turned over to ICE and not coming home. Many immigrants were facing deportation after being arrested, often for minor offenses, and always before conviction. Fear has escalated in our communities and trust has almost entirely eroded between immigrant communities and police.

Antonio, a leader at New Sanctuary Movement explains the situation as follows: “My children are really bad off psychologically—they can’t stand to see a policeman. For them, the police are bad. For them all police are bad. When they see the police, they are scared. My littlest one, when he’s in the car, he wants to hide himself so that the police won’t see him. The police were the ones there when they took me away under arrest covered in blood. My daughter, she wanted to be a policewoman, because I always explained to my children how the police take care of us.”

Back in August 2008, NSM developed a “Know Your Rights” training program, aimed at raising awareness of this new policy and educating the community about their rights. By the spring of 2009, we began our storytelling campaign, which emphasizes personal testimony as a tool for advocacy and leadership development. In the spring of 2010, NSM joined the national “Turning the Tide” campaign organized by the National Day Laborer Organizing Network, which seeks to create a coordinated network of community organizations that will turn the tide against the criminalization of immigrants.

In the summer of 2010, our storytelling campaign had its first victory: an amendment to a contract between the city of Philadelphia and ICE to protect victims and witnesses from ICE interrogation. In June 2011, the Philadelphia City Council unanimously passed a resolution calling for the end of all collaboration between the Philadelphia Police Department and ICE. In the winter of 2012, our attention turned to Harrisburg, the state capital, to fight the passage of anti-immigrant bills on the state level. We will continue to advocate for the rights of the immigrant community and fight against all policies and bills that violate the rights and dignity of immigrants.

Jen Rock is an immigrant rights activist who has worked along the U.S.-Mexico border with a Tucson-based humanitarian aid group called No Más Muertes. She now lives in Philadelphia and works with the New Sanctuary Movement of Philadelphia.