Beyond Humanitarianism: Border Songs and the Politics of Migration

I care, do you care?

Stand for justice, if you dare

Are we a nation, divided as we fall?

The opening lines of Border Songs, sung by the performance ensemble Sweet Honey in the Rock, invite listeners into a conversation about human rights, global awareness, and moral responsibility that continues through many of the album’s tracks and ripples out into contemporary debates surrounding immigration reform. While Sweet Honey’s “Are We a Nation?” was composed in specific response to Arizona’s infamous anti-immigrant law SB1070, the song’s fundamental plea for unity—“We need a nation / joined heart and hand / come together / heed the call”—establishes the thematic backbone of an album, showcasing the human consequences of U.S. immigration policy and border enforcement. The album raises one rallying cry: a call for recognition and outrage around the dead bodies, in excess of 6,000, that have been found on the U.S.-Mexico border since the mid 1990’s. Border Songs listeners will likely arrive at a similar moral consensus after absorbing the album’s 31 tracks, though it remains to be seen whether these deaths will ever pierce the national psyche. As Salvadoran poet Mario Bencastro reflects in his poem, “Arizona,” (read in Spanish on the album):

How many Joses have perished?

neither frightens the statisticians

nor provokes a single tear

from the world’s cold eyes

Border Songs, produced in Flagstaff, Arizona, is at first glance a seemingly eclectic array of music and spoken word created to benefit the work of No More Deaths / No Más Muertes, a humanitarian organization seeking to end death and suffering on the U.S.-Mexico border. The narrative threads throughout the album, however, weave a complex picture of human displacement caused by a free market economic model. As opposed to benefit albums created in response to high-profile natural disasters, Border Songs attempts to raise awareness about an economic disaster with grave ramifications for migrants seeking economic opportunity and family unification in the United States. 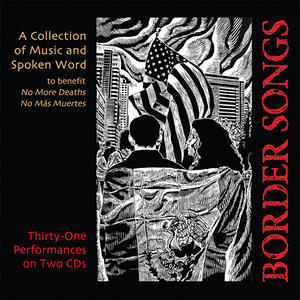 Amos Lee’s “El Camino” offers a soulful glimpse into the emotions surrounding the decision to leave loved-ones behind in search of opportunity. Similarly, the family-level impact of economic migration provoked by agreements such as NAFTA is portrayed in Vermont-based singer-songwriter Scott Ainslie’s melancholy lines in “The Land that I Love,” as he sings: “Who cares if your markets are free? / Look what you’ve done, to my wife and me…my grandfather’s bones are up on the hill / If it weren’t for the wages, we’d be living there still.” On a less melancholy note, the economic impact of undocumented labor is given frank assessment in Tom Russell’s tongue-in-cheek ballad, “Who’s Gonna Build Your Wall?” as he challenges: “Who’s gonna build your wall? / Who’s gonna mow your lawn? / Who’s gonna cook your Mexican food, when your Mexican maid is gone? / Who’s gonna mop the floors tonight, down at the local mall? / Who’s gonna wash your baby’s face? / Who’s gonna build your wall?”

The border wall has indeed been built, and the benefits that current border and immigration measures hold for private prisons and defense contractors are primary attention to Border Songs producers, both of whom contributed original songs of their own to the album. Robert Neustadt’s “Voluntary Return,” for example, includes a nod to Operation Streamline, an expedited prosecution and deportation program that has received widespread criticism for undermining due process rights. Moving from a faulty justice system to the injustices suffered by undocumented laborers, Border Songs co-producer Chuck Cheesman describes an immigrant’s experience on a cold Chicago day when he sings in “Uphill”: “Sixty minutes of time, for a five dollar bill / it’s hard to get rolling, when it’s all uphill.”

In addition to issuing concrete critique of the immigration system, tracks on Border Songs also offer listeners raw, visceral accounts of human suffering during migration journeys in the Arizona borderlands and beyond. Several spoken word selections, such as Chilean poet Raul Zurita’s “Desiertos 4,” invite the listening audience to place themselves in the worn shoes of a migrant heading through the desert. Author Charles Bowden, most known for his writing on drug-related violence and femicides in the border city of Ciudad Juárez, offers a chilling account of a nighttime desert scene. Other artists describe the dehumanizing aspects of the deportation experience, such as playwright Denise Chavez’s piece “Rosaura Muñoz, ID #595,” which recounts the story of a woman seeking help as her clothes are stained with menstrual blood in the back of a Border Patrol vehicle. California songwriter Joel Rafael’s “Sierra Blanca Massacre” honors migrants who perished while being smuggled inside a boxcar in Texas as he sings, “Locked from the outside in spite of their plea / Inside was 130 degrees.” And author and activist Margaret Randall’s poem “Offended Turf” places the listener alongside the bars of the 14-foot border wall, offering observations of the militarized space spoken against the natural sounds of the desert, mixed with Glenn Weyant’s unorthodox sound sculpture—a piece that was recorded using the steel border wall as a musical instrument.

The stories of loss and despair on Border Songs are strategically counterbalanced by another narrative arc of hope and redemption. Some of the album’s best known contributors, such as Michael Franti and Pete Seeger, anchor these messages of racial and trans-border unity through their respective tracks, “Hello, Bonjour,” and “My Rainbow Race.” Nicaraguan singers, Duo Guardabarranco, also convey a message of the redemptive power of music in the face of migration and war through “Canción Pequeña.” In a departure from the folk-inspired tracks and spoken word selections, Arizona rappers Pachuco and Classik express the assertion of rights of immigrant communities in “Somos Mexicanos.” And Arizona favorites Calexico and Sergio Mendoza y la Orkesta contribute popular tracks “Across the Wire” and “La Cucharita” that lend a familiar regional sound to the album.

Border Songs does not offer a fluid listening experience, but instead challenges listeners to adjust to distinct languages, emotions, and genres. It is difficult to experience the album casually, particularly given the spoken word selections that depict fundamentally despairing situations. While there is little doubt that the album will deepen convictions of those sympathetic to immigrant rights, will it reach and persuade those not already on board with this message?

Randall captures the potential of music to alter human interaction as she states: “We are taking a chance our vibrations will change these molecules of hate.” Just as the migration stories in the album depict journeys of hope across great distances, the unlikely convergence of song and spoken word from diverse artists throughout the hemisphere might allow the unconvinced to embark on similar journeys of knowledge and transformation.

Border Songs can be purchased through Amazon.com or CD Baby at the following link: http://www.cdbaby.com/cd/bordersongs. All proceeds benefit No More Deaths, www.nomoredeaths.org. The CD would make a powerful gift, as each album purchased provides 29 gallons of water placed in the Arizona desert for people in need.

Heather Craigie spent over a decade working in experiential education, teaching, and research along the Arizona-Sonora border. She currently works to develop civic engagement programs for colleges and universities in Maine.