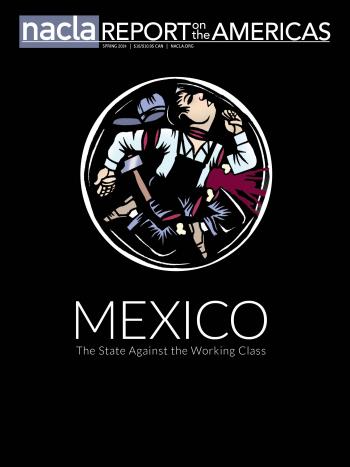 By incorporating low-wage, low-rights Mexico into the continental production system, a process that was well under way before NAFTA, big business sought both to discourage labor militancy as well as to harmonize labor costs downward in Canada, the United States, and in the older industrialized and unionized regions of Mexico. NAFTA “constitutionalized” these transformations by treaty, seeking to make them near impossible to change.

Sacrifice of a Goddess
Fred Rosen
Sacrifice can be the fuel for the creation and legitimation of a particular set of social relations. Sometimes individual sacrifice is voluntary—even enthusiastic—sometimes not. In present-day Mexico, sacrifice of a different sort has moved from ritual to everyday reality.

Banana Republic Blues: Militarization and Resources in Honduras
Kaelyn Forde
Since Honduras' 2009 military coup, the United States has been increasing its military presence in Honduras. “Militarization serves a number of purposes right now,” says Rodolfo Pastor, former Honduran diplomat to Washington, “and one of them is to control local populations who may rebel against their lands being granted to foreign companies."
Elections in Chile: Confronting the Legacy of Dictatorship
Emily Achtenberg
On Election Day in Chile, students occupied and hung a banner outside front-runner Michelle Bachelet’s campaign headquarters, proclaiming: “Change is not in the Presidential Palace, but in the ‘wide avenues.’” It was a powerful reminder of how student mobilizations have transformed Chile’s political agenda during this election year.
The Buenos Aires Subway Strike: A Window on Post-Collapse Labor Politics
Rene Rojas
Not all is harmonious between unions and the Argentine state, as demonstrated by a surprisingly fierce subway strike in August 2012. Offering a glimpse into labor-state relations, the strike’s key features shed light on the prospects for sustaining and deepening the 'Modelo K.'
Venezuela: Chavistas Debate the Pace of Change
Steve Ellner
The violent anti-government protests that shook Venezuela in February have once again thrust the issue of the pace of change into the broader debate over socialist transformation.
Work Together to Dilute Hate
Cayapo
With few exceptions, most international coverage of the recent protests in Venezuela gives little sense of the response from the popular social movements that support the Maduro government but operate independently from it. This piece is written by long-time social movement organization Cayapo.

Alternative Immigrant Demands
David Bacon
The Dignity Campaign, FIOB, and AFSC proposals, are not just alternative programs for changing laws and policies, but implicit strategies of alliances based on mutual interest.
Criminal Violence and Social Control
Hepzibah Muñoz Martínez
The violence and climate of fear that pervade large parts of Mexico affect everyone, but the effects and intensity typically depend on one’s economic position and political influence.
Defending Territory in Oaxaca
Jonathan Treat
On the first anniversary of Bernardo Vásquez’s murder, I was asked to do a photo exhibit in Vásquez’s hometown of San José del Progreso, featuring movements in opposition to mining in Mexico and Guatemala. When I arrived at the town, I was greeted by more than 100 people who had blockaded the entrance to the mine.
Elements of the New Labor Law
Robin Alexander and Dan LaBotz
How Mexico's recently reformed labor law weakens workers’ bargaining power.
Energy Privatized: The Ultimate Neoliberal Triumph
James Cypher
On December 21, 2013 Mexico’s president, Enrique Peña Nieto, gave the official decree ending the 75-year history of the national oil company, PEMEX, which coincided with the privatization of Mexico’s electrical generating and distribution system. The geopolitical implications may be sweeping, with the NAFTA bloc quickly becoming the globe’s most important energy power. For roughly a quarter-million employees, the likelihood of massive layoffs and benefits cuts is unknown, but widely anticipated.
Energy, Integration, and Colonialism
Alejandro Álvarez Béjar
Mexico’s energy reform is a historical rupture with its nationalist past. In spite of popular opposition, it has been pushed through by a powerful elite consensus in the United States and Mexico and by an alliance among all three major political parties.
Fighting for Independent Unions in the Maquilas
Cirila Quintero Ramírez
Most of the unions that exist in Mexico’s maquila sector—the duty-free assembly plants that import raw materials and intermediate goods, and then export final products for consumption elsewhere—exist only on paper.
Immigrant Labor, Immigrant Rights
David Bacon
Outside the Washington beltway, a loose network of groups has grown that has generally opposed most "comprehensive immigration reform" bills and their provisions, and that has organized movements on the ground to oppose increased enforcement and repression directed against immigrant communities.
Introduction: Mexican Workers in the Continental Crucible
Richard Roman and Edur Velasco
By incorporating low-wage, low-rights Mexico into the continental production system, a process that was well under way before NAFTA, big business sought both to discourage labor militancy as well as to harmonize labor costs downward in Canada, the United States, and in the older industrialized and unionized regions of Mexico. NAFTA “constitutionalized” these transformations by treaty.
Mexico’s Labor Reform: A Workers’ Defeat—For Now
Robin Alexander and Dan LaBotz
Mexico recently passed a labor law that will make jobs less secure by, among other things, permitting greater outsourcing as well as temporary and part-time work. The law is the result of 40 years of struggle among political parties, rival unions, employers, and workers.
The Crusade Against Hunger and the Persistence of Poverty
Enrique C. Ochoa
SINHAMBRE (National Crusade Against Hunger) continues the historic anti-democratic approaches to anti-poverty policy by taking a charity-based approach that excludes workers, consumers, and campesinos from the decision-making process.
The State Against the Electricians: A War of Extinction
José Antonio Almazán González
In October 2009, with Mexico facing severe repercussions from the international economic crisis—its GDP contracting by nearly 6%—the government of President Felipe Calderón organized a takeover of the Mexican Electrical Workers Union (SME).
The State Against the Miners: Resistance and Solidarity
Oscar Alzaga
Mexico’s miners have long fought for higher wages, better working conditions, and for the right to unionize independently. At every turn, they have encountered resistance from the government, from mining corporations, and from government-controlled unions.

Beyond Humanitarianism: Border Songs and the Politics of Migration
Heather Craigie
The opening lines of Border Songs, sung by the performance ensemble Sweet Honey in the Rock, invite listeners into a conversation about human rights, global awareness, and moral responsibility that continues through many of the album’s tracks and ripples out into contemporary debates surrounding immigration reform.
Family Values
Maggie Carter
Jeff Rubin and Emma Sokoloff-Rubin's Sustaining Activism: A Brazilian Women’s Movement and a Father Daughter Collaboration, seeks to define a social movement not by its goals, successes, and failures, but by the people who have poured their lives into it.
Founders of Empire
Dan Beeton
A new book from former New York Times correspondent Stephen Kinzer, The Brothers: John Foster Dulles, Allen Dulles, and Their Secret World War, profiles the nexus, frequently covert, that ties together Wall Street law firms, powerful corporations, and U.S. foreign policymakers.
How We Study Gangs
Naomi Glassman
Deborah Levenson's Adios Niño, which chronologically follows the development of the youth gangs of Guatemala and tries to explain their violent transformation, is the book on gangs we need to read, but not the book we want to read.
Race and the Revolution
Peter Roman
In Esteban Morales’s Race in Cuba: Essays on the Revolution and Racial Inequality, the fundamental problem in Cuba consists of ignorance and avoidance of the subject of race.

Alambre
Bocafloja
In his latest release written for NACLA's Spring 2014 issue, pioneer of Mexican hip-hop Bocafloja raps about the contradictions within Mexican nationalism and the complex psychological process migrants endure in their journey to the United States.

Kissed by the Devil: A Tale of Theft and Rescue
Irene Ortiz
This "From the Archive" article originally appeared in Vol. 36, No. 2, Sept.-Oct, 2002. Cuernavaca, Saturday, June 13, 1998: At 1:55 in the afternoon I park my pickup truck on Avenida Central, across the street from La Harinera, about a block from the big traffic circle, La Luna.