Ten years ago, in the basement of a yellow church in Rio Grande do Sul, Brazil, Jeff Rubin, his wife, and three young daughters participated in a workshop held by the Movement of Rural Women Workers (MMTR). Jeff remembers the three-day workshop as being pivotal in framing his relationship with and establishing his level of access to the MMTR, which he attributes to the presence of his family. In a room in which nearly all of the women present were there because they had built the courage to defy a husband, father, or brother who did not support their choice to attend, Jeff—a father and husband—brought his wife and daughters. 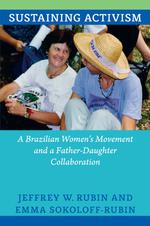 He performs his “husbandness and fatherhood,” seeking to demonstrate his comfort in taking on non-traditional roles, such as caring for his infant daughter and washing his family’s dishes. Mesmerized by the workshop and the women she meets, Jeff’s 12-year-old daughter Emma embarks on the first step of a decade-long collaboration with her father that hinges on cooperation and mutual respect, seeking to share the story of women who, when not much older than herself at the time, ran away from their homes to escape fathers who did not respect them as women.

These are the stakes that frame Sustaining Activism: A Brazilian Women’s Movement and a Father Daughter Collaboration, which, as the title suggests, is much more than a history of a social movement. The book reveals many tensions—between the promise of democracy and its fraught fulfillment, institutional reform and grassroots organizing, political change and cultural change, singular identity and broader movement platforms, and the researcher and the subject—and also resolutions, as the characters in this drama struggle through these frictions seeking some sort of acceptable balance.

The result is a text that is at once ethnography, memoir, and oral history, reaching beyond the aim of research and analysis and into human connection, common experience, and understanding. Sustaining Activism, which seeks to define a social movement not by its goals, successes, and failures, but by the people who have poured their lives into it, profiles various women involved in the MMTR since its early foundations. It looks to the lives and experiences of these women to reveal the complexities and tensions characteristic of democratic social movements.

A central character in this story is MMTR founder Gessi Bônes. Having first become involved in activism through church youth groups and a union reform movement, Gessi, along with several friends, decided to form a new movement after facing opposition to women’s rights within existing movements. The resulting statewide women’s movement sought to take on issues of class and gender simultaneously. It struggled to improve the lives of rural women, who, as farmers’ wives and daughters, were expected to work on the farms and care for children without benefits under patriarchal heads of households. Having founded the MMTR in 1986, Gessi worked as a leader of the movement until 2001, when she stepped down to take a government job as the head of her local health department.

When Gessi founded the movement, she saw no other pathways to creating the kind of change she believed in other than grassroots organizing and protest. Having made great headway during the 15 years she spent as the leader of the movement, and finding herself in a world where she, a woman, could take on an important government job with significant autonomy and receive salary and benefits, Gessi took the position with a desire to press for changes from within the system.

Gessi saw her choice to turn to institutional reform as a necessary and logical step following her progress as a grassroots organizer. However, the rest of the MMTR did not agree and saw her actions as a betrayal. Gessi’s story illustrates the enduring question Latin American activists face of “where to do politics.” Civil disobedience and protest have often stood in opposition to institutional reform, yet Gessi seeks to attain a balance between the two.

Similar to Gessi, an activist named Mônica has led a life that illustrates the tension inherent in many social movements—in her case, a disconnect between political and cultural change. Mônica lives on a farm outside of town where she juggles childcare, housework, and farm work, and attends meetings in her very limited free time. She fights for the women’s movement and asserts its ideals at meetings, but in her own home makes excuses for her patriarchal husband who refuses to lift a finger to do housework. Though it is frustrating for other members to watch her struggle, women like Mônica serve as a reminder that cultural change is a long-term process, and though laws may change, there is much work ahead to create a world in which women will not face repression at home.

Since the movement began, Gessi’s sister Ivone and her partner Vania have been speaking out against gender injustice, yet remain silent when it comes to the discrimination they face in their daily lives as a gay couple. In exchange for this silence, they receive tolerance from the movement and their community. Though Ivone and Vania have sought to fold gay rights into the movement, they have been met with opposition by activists who feel that to expand the mission of the movement would be to weaken its impact. Though the MMTR began as an attempt to bridge workers’ rights and women’s rights, they see expanding the movement’s identity as a threat to its influence. Like many movements before it, the MMTR, founded on ideals of equality, turns to exclusion to protect its cause and mission.

A young journalist (Emma) and a seasoned professor of history (Jeff) alternate authorship of the book’s chapters. They weave together a powerful analysis of social movements and their potential to make an impact in democratic society. The text, which navigates between ethnography, history, and personal narrative, is extremely accessible, providing thought-provoking analysis that is transferable to wider contexts.

Jeff and Emma’s relationship greatly influences the book’s content, as the two become characters in the story. They reflect upon how their presence, coming from a home and a way of thinking that approaches gender in a very different way, made an impact on the women they worked with. Many women ran away from oppressive fathers in order to join the MMTR, while Jeff and Emma form a unique partnership working for the benefit of the movement, as a team rather than a hierarchy of dominant father and obedient daughter.

Many of these women are no longer involved in the movement, citing exclusion or lack of cooperation as reasons for their disenchantment. However, many have continued to take on the work of activism in their own lives. Jeff describes this as “a movement of deeply connected yet autonomous individuals” with the potential to make widespread political and cultural change. It relies on a multitude of strategies, perspectives and positions, rather than a singular platform of activism. Just as Sustaining Activism tells the story of a movement through the lives of its members, it is the individual adherents of the movement who engage in the work of activism that have the potential to make change, perhaps more so than the body of the movement itself. These dispersed, diverse, and interconnected women strike a balance between the frictions that have plagued this movement and hindered its potential. The authors contend that this brand of activism is “what democracy needs to survive in the world today.” Similarly, the book itself, a unique collaboration between distinct voices and perspectives, is a rich, thought-provoking, and surprisingly accessible addition to the study of democratic social movements.

Maggie Carter graduated with a BA in individualized study from New York University and is currently the Circulation and Outreach Coordinator for NACLA.