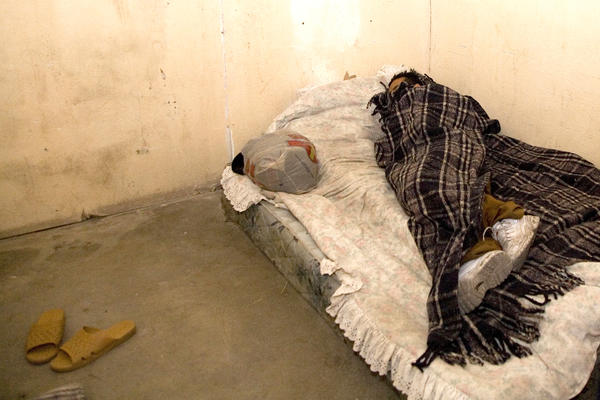 The intertwined development of neoliberalism, militarization, and cartel violence in Mexico has created a climate of fear and a political economy deeply affected by violence.  The distribution of the violence has a strong class character, as do the possibilities for avoiding violence, gaining access to justice, or even discovering what happened to victims of disappearance.

A major Mexican newspaper, Reforma, maintains a graph called the “Executionmeter” or Ejecutómetro, which lists 47,268 deaths from drug-related violence between 2006 and 2012, and 6,906 people killed in 2013 alone. But confirmed deaths tell only a part of the story. According to Mexico’s Ministry of the Interior, there were 26,121 disappearances in Mexico between 2006 and 2012. The vast majority of the disappeared are from the urban working or middle classes, or the rural poor. The violence and climate of fear that pervade large parts of Mexico affect everyone, but the effects and intensity typically depend on one’s economic position and political influence. The wealthy and powerful can often protect themselves, and when they do suffer violence, they have much greater access to justice.

In October 2012, José Eduardo Moreira, son of the former governor of the northeastern state of Coahuila and nephew of the then-current governor of Coahuila, was reported missing. A few hours later, his body was found, and within weeks, two local police officers were arrested for their involvement in his assassination. In contrast, Juana Guerrero continues to look for her brother and her son who were among 23 people disappeared in the state of Tamaulipas in March 2011, all from a poor rural area in the state of Guanajuato, on their way to the U.S. border to look for work. Despite her continued efforts on behalf of her brother and son, state authorities have not provided Juana with any information regarding the disappearances.

Members of a powerful political family, that is, were able to quickly locate the whereabouts of their relative, while access to justice for Juana has been obstructed. Low-ranking police and military officials have also been disappeared and their cases similarly neglected by state authorities. Class inequality and differential access to justice pervades even the state security institutions themselves.

Working and middle class people and the rural poor not only lack economic and political resources, but also face intimidation from state authorities and organized crime. Fewer than 25% of offences are reported, and only 2% of investigations result in convictions. State authorities ask families to provide evidence in order to continue with preliminary inquiries, but then usually discard any evidence presented. Families also have to deal with confusion about federal and state jurisdictions as well as complex and ambiguous laws. Families ranging from middle class to poor do not have the financial means to hire legal experts with the high level of skills and education required to navigate these complicated bureaucratic processes. These families have to become private investigators and pursue leads themselves to then provide clues to pressure state authorities to continue the search for their disappeared relatives.

The class disparity in disappearances comes in part because those with wealth and political power can take protective measures and adapt their lives to the violence in the country. This privileged sector can hire personal security services, as shown by the recent growth and large profits of private security companies in Mexico. Multisistemas, for instance, a domestic private security company, increased its profits by 25% in 2010. At the same time, economic elites are able to accommodate their lifestyles to Mexico’s violent context. Many have moved their families to U.S. cities near the border, such as San Antonio, Texas, and commute back and forth between the United States and Mexico. Thus, the major shareholders and high-level administrators of large companies can distance themselves from the threat of being disappeared while taking advantage of profitable investment opportunities in Mexico.

Meanwhile, the fear incited by disappearances has become a form of social control to silence opposition to militarized neoliberalism. Much of the violence occurs in regions of intense and recent industrialization, and thus has a tremendous impact on workers driven to the cities by the desperate need for work. The combination of organized violence by cartels and the state creates a climate of terror further exacerbating state repression of worker attempts to organize in the export processing maquila regions. The violence, in its various manifestations, deliberately or unintentionally, makes individual or collective resistance to exploitation extremely difficult and risky.

Neoliberal reforms promoted austerity and the privatization of communal land, forcing many campesinos to relocate to maquila regions, one of the few sources of steady employment. The maquila regions, such as Ciudad Juárez, have become the most violent areas in the country. Workers not only have to deal with job insecurity and low wages, but also face the daily threat of violence, torture, and disappearance. During the 1990s, women working in maquiladoras were the main target of violence and disappearance. Since 2006, however, the victims of disappearance increasingly include young men, children, and seniors.

The economic crisis and general insecurity have further limited the range of strategies that workers can use to bargain with both employers and the state and to protest against the deterioration of working conditions. Labor-rights defenders have been kidnapped and received threats. A lawyer working for the Worker Support Center in the state of Puebla, for example, was abducted on his way to a hearing in a defense case of garment workers in 2012. This event forced the center to close its office and suspend its work with Puebla’s maquiladora workers. The labor federation of the northern city of Matamoros in Tamaulipas, one of the oldest maquila regions in the country, has suspended May Day parades since 2009 due to violence.

Militarized neoliberalism has passed the costs of increased violence onto the middle classes, workers, and the rural poor through low wages, austerity, and regressive taxation. The economic benefits that state elites receive from drug-related violence remain untouched, as the power structures that produce selective, class-based access to justice are reproduced. The fear incited by sudden deaths and disappearances has become a form of social control to silence labor unions and other opposition to militarized neoliberalism—the center of the Mexican government’s economic and political strategy today.

Hepzibah Muñoz Martínez is Assistant Professor in the department of history and politics at the University of New Brunswick. She teaches political economy and Latin American politics.