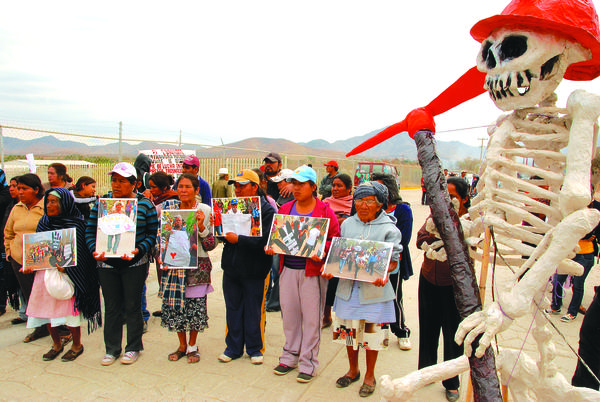 On the first anniversary of Bernardo Vásquez’s murder, I was asked to do a photo exhibit in Vásquez’s hometown of San José del Progreso, featuring movements in opposition to mining in Mexico and Guatemala. I agreed, thinking it would be in a local office space. But when I arrived at the town, I was greeted by more than 100 people who had blockaded the entrance to the mine. They insisted that the best place for the exhibition was right there on the fences of the Fortuna Silver mine.

Bernardo Vásquez, an agronomist, community defender, and environmental activist, had been assassinated by hired pro-mine gunmen on March 15, 2012. When I took out the 35 photos I’d brought with me, a compañera announced: “We are here to remember Bernardo. His struggle is our struggle, and it continues forward. For our mother earth, for our water.” She then invited the women to hold up the photos, some of which I’d taken on a previous visit to the community, and some from other mining struggles, as they performed a ceremony in honor of Vásquez and the earth. They were physically holding their own history. They were standing in solidarity with others of a similar fate.

The images for this photo essay were taken in three Zapotec communities in different regions of Oaxaca, united through their ongoing work to find new, shared strategies for defending their territories. Exhibits of these photos have been one of those tools.

Nearly 80% of the land in Oaxaca is communally owned, mostly by indigenous people, and the Mexican government is one of 20 countries that has signed the International Labor Organization Convention 169. The convention guarantees indigenous peoples the right to free, prior, and informed consent, or consultas, regarding all policy and development processes that affect them. But in Mexico, as the federal government constitutionally enjoys sub-soil rights, it regularly—and increasingly—grants exploration and mining concessions to transnational mining companies without holding the consultas. In the past few years alone, the Mexican government has granted roughly 12,000 mining concessions throughout the country, with some 30% in the state of Oaxaca.

San José del Progreso is home to the working Canadian Fortuna Silver Inc.’s Trinidad/Cuzcatlán mine. Since the mine opened, it has been home to some of the most extreme and ongoing violence in Mexico against those in opposition to the mine. Today the town remains politically divided on the issue.

In another part of Oaxaca, Caluplálpam de Méndez is one of the only communities in Mexico that has been successful in closing down a working mine, the Canadian Continuum gold mine. After the disappearance of 13 local springs and massive contamination—animals were dying from drinking toxic water—the town organized to push the mine out. After a successful blockade of a major highway, the government conceded to send the environmental protection agency (PROFEPA) to the site. PROFEPA documented such flagrant violations of environmental regulations that the mine in October, 2007 was ordered to close. But the mining concession is still active, and Canadian company Sundance Minerals has plans for an extensive open-pit gold mine that would destroy the community’s remaining water source and devastate its forests.

The first community in Oaxaca’s central valleys to publicly protest mining in its territory was Magdalena Teitipac. They have since held a forum inviting other at-risk communities, most already concessioned to transnational mining companies, to share information, exhibit photos from other mining-impacted areas, strategize, and organize to defend their territories. Their primary goals are the defense of water (an increasingly scarce resource throughout Oaxaca), agricultural lands, and autonomy—a right that is variously configured but which rests on the collective decision on how territories are used and shared.

Eduardo Galeano, Uruguyan author, poet, and historian, has chronicled the “curse suffered by people who live on resource rich lands.” Many indigenous and mestizo people in Oaxaca have borne and are bearing that curse. But increasingly, these disparate communities are sharing knowledge, strategies, cultural practices, and goals. They are working together to reject mining on their lands, asserting the autonomy to which they are, by law, entitled. 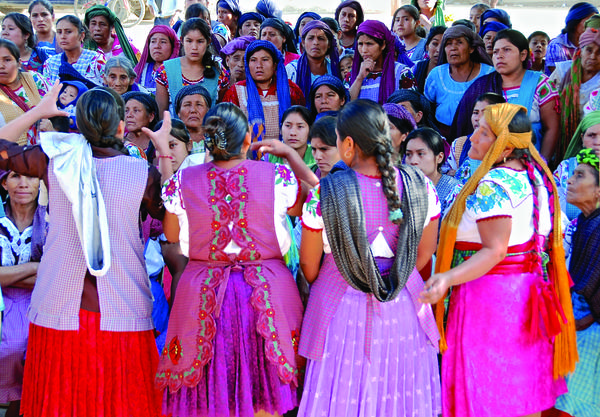 A group of women explaining the implications of mining in their community (Magdalena Teitipác). 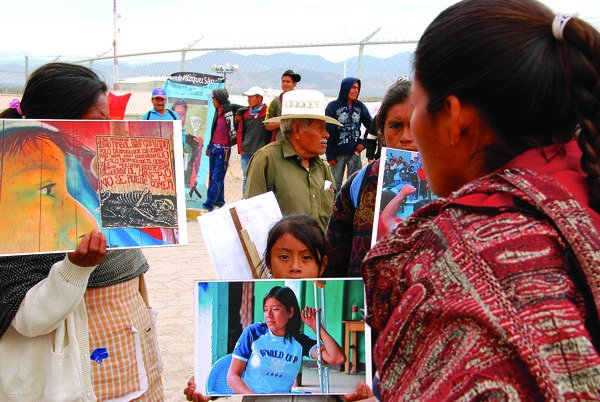 This is the last photograph I took of Bernardo Vásquez at a community forum, two months before he was assassinated. 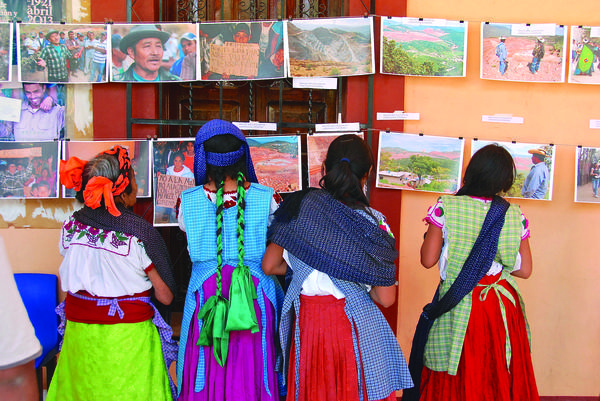 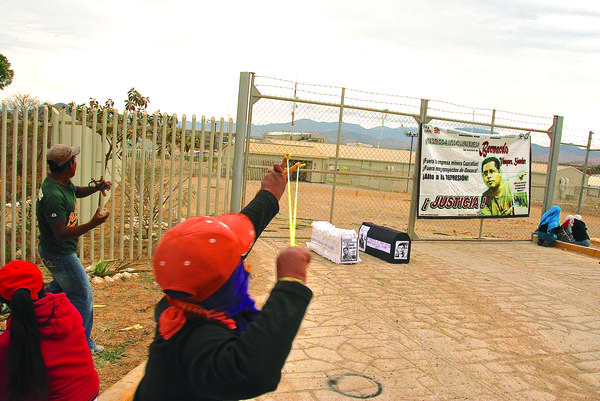 Youth use slingshots at Bernardo’s funeral to show frustration and resistance against the mining giant (San José del Progreso). 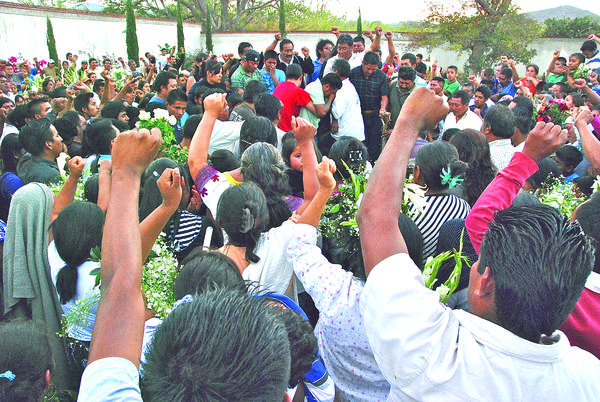 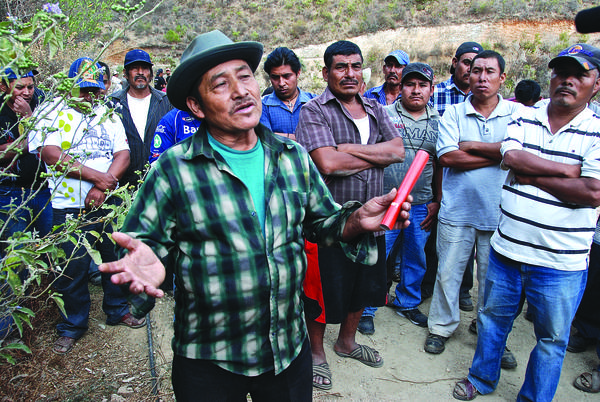 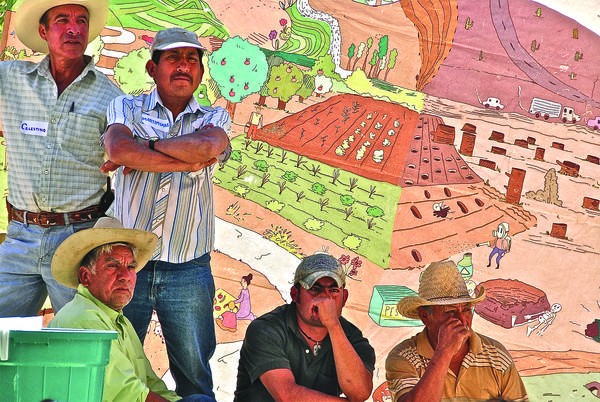 Men from communities at risk from the expansion of fortuna Silver’s Trinidad/Cuzcatlán (San José del Progreso). 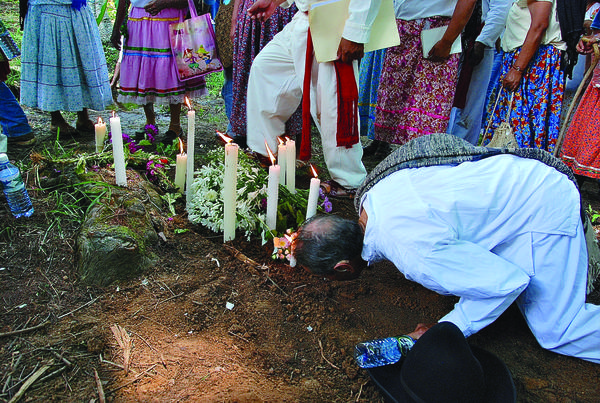 A Zapotec priest blesses the earth in a communal ceremony declaring the area sacred and protected (Calpulálpam de Méndez). 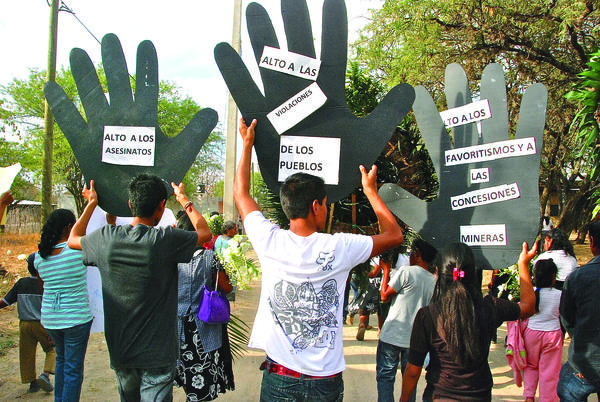 Jonathan Treat is a journalist, professor, activist, and founding member of the non-profit organization, University Services and Knowledge Networks of Oaxaca (SURCO, A.C.). In recent years Treat has focused on issues of defense of territories, human and environmental rights, and sustainable alternatives to the current “development” model. He leads SURCO educational delegations related to defense of territories and food sovereignty in Oaxaca and Chiapas.