Race and the Revolution


Esteban Morales’s Race in Cuba: Essays on the Revolution and Racial Inequality consists of interviews, essays, and articles previously written by the author and compiled by the editors Gary Prevost and August Nimitz. While the contents of the book are extremely important in understanding contemporary Cuban society, inadequate editing results in many unnecessary repetitions, making the book a rather tedious read. Furthermore, the editors do not cite the chapters’ original dates of publication, which would have been helpful to readers. 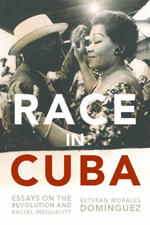 The book deals fairly and critically with a subject for a long period considered taboo in Cuba and not widely disseminated in English. For Morales, a Cuban political economist, the fundamental problem in Cuba consists of ignorance and avoidance of the subject of race. He is quite aware of the gains achieved under the revolutionary government but he is also aware that racism does not disappear with a higher degree of social justice.

This awareness, however, was not shared by Cuban officialdom, and after 1962, the racism question was considered resolved and “a long period of silence ensued.” This silence was not to be broken in official discussion until the late 1980s. Until then, those who critically discussed racism in Cuba were accused of dividing Cubans.

Racism was inherited from pre-revolutionary society and eliminated from the state and government institutions after 1959, but maintained a toehold in families, individuals and some institutions. Later, the severe economic depression of the 1990s “caused racism to resurface with the virulence that can be expected from a problem that, having been seen as solved, in fact was not.”

One problem is that in 1959, blacks and mulattos did not start at the same level as whites. Another is that while enjoying equal societal advantages, blacks return home to marginal neighborhoods, with inferior schools and the poorest families. Morales argues that these are consequences “that must now be corrected.” Furthermore “white Hispanicism” is still emphasized over African culture; “defining oneself racially is frowned upon;” and there is no recognition of black history, meaning that race is not discussed in school. Morales also points to the absence of blacks in the country’s top leadership and on television.

Morales traces the historical development of racism from slavery, to the fears generated by the Haitian Revolution, to the U.S. intervention of 1898, and includes the entire Republican period to 1959. He discusses present day racial discrimination in the tourist industry; the racial composition of agricultural land ownership; remittances from abroad; and lack of managerial positions correspondent to educational levels.

Perceptions of the crime rate have also been influenced by racism. During the 1980s, the police identified low-income neighborhoods in Havana with predominant black populations as centers of crime, even though the crime rate in more affluent areas was higher. Currently, in all of Cuba, blacks and mulattos represent 57% of the prison population.

This volume is an important addition to our understanding of the complexities of the Cuban Revolution and together with the literature regarding economic changes now taking place in Cuba, helps move the left away from those engaged in oversimplified cheerleading attitudes of unconditional support.