Black Central Americans in the Struggle Against AIDS


After Vilma found out she had HIV, a doctora visited her at home and took her for a walk. She hadn’t been eating, drinking, or sleeping. Vilma spent her days crying inside the house. In front of the doctora, however, she contained her tears. 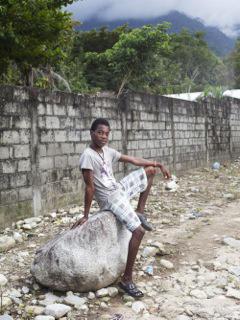 Dominic Suaso is public with his HIV status (David Rochkind)

Julio, Vilma’s late husband, never told her he had HIV. She found out only after he died, when she learned he had been taking medication for months. He died before their daughter was born. Vilma often wondered whether she could have avoided being infected had Julio only told her about his own HIV status earlier.

Vilma is mestiza, and Julio was Garifuna, an Afro-Amerindian ethnic group in Central America. In 2009, a study revealed that the Honduran Garifuna had an HIV prevalence rate several times higher than the national rate. The implications of this proportional difference are particularly alarming considering Honduras has one of the largest epidemics in the region.

There is virtually no HIV data on the Garifuna or any other Afro-Central American group outside of Honduras. But their communities form a corridor of strong kinship ties and high internal mobility along the Caribbean coast that reaches north to Guatemala and Belize, and south to Nicaragua and Costa Rica, suggesting that the epidemic could extend throughout the region’s Black communities. Nor are there studies of HIV in other Afro-Honduran groups, such as the Creoles, who may also share social networks with the Garifuna.

While the lack of data on Afro-Central American HIV epidemics has resulted in an ineffective response to the epidemic in these communities, their statistical absence is compounded by factors endemic to the region as a whole: widespread stigma against those with HIV, and levels of extreme poverty that both undermine patients’ ability to manage the illness, and deny the infrastructural development needed for the delivery of effective medical care.

In Central America, the fear of the negative consequences of disclosing one’s HIV status—a key step in building alliances amongst patients and empowering communities living with HIV—is based on concrete instances of rejection and discrimination. Some families evict their HIV-infected, or build quarantine rooms for them, keeping their table utensils separate. Early on in the epidemic, the different Christian denominations in Afro-Central American communities condemned the HIV-infected, legitimizing the preexisting stigmas around sex and death with divine sanction. Today, churches—repentant—address the HIV epidemic with a paternalism that reaffirms the feelings of guilt and dependency that already burden so many people with HIV.

To avoid rejection and humiliation, Central Americans living with HIV may change residence, avoid seeking services in nearby health centers, or forgo medical attention altogether. However, no matter what lengths they may go to keep private their HIV status, gossip spreads quickly and irreparably, and those perceived as seropositive are openly humiliated.

The impact of anti-HIV stigma in Central America extends beyond the community-wide level, permeating the medical practices surrounding the illness. Vilma’s case is particularly telling: she learned she was HIV-positive at the obstetrics clinic, when she had to ask a stranger in the waiting room to read aloud the news her doctor had scribbled on a piece of paper, as she can’t read or write. When she later asked her doctor about Julio’s health, he responded, offering his own moral stance: “That guy won’t even eat the tamales of Christmas Eve! And with that illness…why did you get involved with him?”

The doctor’s readiness to talk to Vilma about Julio’s condition, along with the chain of taken-for-granted obstacles that undermined her own privacy in receiving her own test results, shows the weak professional ethics of health workers in the region, where HIV test results are known to spread quickly. (“Before I got home the whole neighborhood already knew it,” a community member with HIV told Hondurans Against AIDS researchers in 2012.) For Central Americans with HIV that use the public healthcare system, every hospitalization, clinic visit, and medication pickup is fraught with the imminent risk that their health status will be circulated publicly.

For Afro-Central Americans with HIV who do pursue medical care despite their stigmatization, access to HIV care and treatment alone is intermittent, if not virtually nonexistent. The geographical centralization of medical services demands that some patients take long trips to their clinics for checkups and medicinal controls that they can seldom afford. In Honduras—unlike in Nicaragua or Guatemala—the healthcare system demands that people with HIV pay a cuota de recuperación, or copayment, to “reimburse” the government for services and treatment expenses that, until last year, have in fact already been paid for by international agencies. While the fee is, in theory, voluntary, social workers—under orders or on their own initiative—expose patients to long, prying interviews should patients request its dismissal. Some Hondurans therefore stay home, missing medicinal controls or going without medication, to avoid the embarrassment and stress of the clinic interrogations.

The poverty that affects just under half of Central Americans exacerbates the bio-vulnerabilities that HIV imposes. Healthcare workers frequently tell patients to take their HIV medication on a full stomach, but many don’t have access to food on a regular basis, and thus miss their doses—a significant hurdle in adhering to the strict regimes that HIV treatment requires.

As in the case of Vilma and Julio, heterosexual transmission seems to be the major pattern of the spread of HIV in the Central American Caribbean coast. However, current epidemiological data considers HIV in Central America to be a “concentrated” epidemic—one that affects well-defined groups of people and risk behaviors outside the socio-cultural “mainstream,” like in the United States—where “men who have sex with men,” “sex workers,” and “intravenous drug users” are the “most at risk populations.”

Honduras, however, has a “mixed” epidemic, concentrated among “most at risk populations” from Tegucigalpa to the northwest, and “generalized”—that is, across the general population—along the Caribbean coast in the north. Honduras’ Secretariat of Health data shows that between 1985 and 2010, heterosexual transmission caused 85% of all reported cases of HIV infection. From 1985 to December 2012, for every 10 Honduran women with asymptomatic HIV infection, there were just 7 men in the same condition, meaning that virtually both genders were equally affected—a feature of “generalized” HIV epidemics. But the insignia of the STI/HIV/AIDS Department of the Honduran Health Secretariat still features two overlapping male symbols, suggesting that health authorities prefer to represent the HIV epidemic there as “concentrated” among men who have sex with men.

Although identifying the specificities of people and risk behaviors allows for the design and implementation of targeted HIV service provision and prevention strategies, most Latin American HIV statistics do not disaggregate Afro-descendants from the “general population.” “Ethnic group” is the sole marker used to link a person with HIV to a linguistic, cultural, or historical community. However, only groups with an officially accepted claim to indigeneity are considered “ethnic” in HIV statistics. Afro-Latin Americans with HIV are counted in the “general population” along with all other non-indigenous people who are not intravenous drug users, men who have sex with men, sex workers, or children born with HIV. As such, there are no records designed to gauge the impact of the epidemic in Afro-Central American communities.

The geographic spread of the HIV epidemic however, hints at its impact in Afro-Central American communities. For example, the department of Izabal, Guatemala, where most Afro-Guatemalans live, ranks fourth nationwide in total number of HIV cases reported. For each woman with HIV there, there are 1.3 men, indicating a higher rate of heterosexual transmission than the national rate of 1.6. The HIV prevalence rate of female sex workers is twice as high in Izabal (11%) than in Guatemala City (5%). In Panama, the province of Colon, an area with high density of Afro-Panamanians, has the second-highest rate of HIV infection in the nation.

Afro-Central American invisibility in HIV statistics echoes the peripheral location of the Caribbean coast in the region’s imaginary, and the historical reluctance of these nation-states to bring African bodies into the “legitimate” citizenry.

A major demand of the Afro-Latin American rights movement has long been the disaggregated inclusion of Afro-descendent populations in national censuses. As HIV heterosexual transmission grows in Central America, more nuanced, racially sensitive characterizations of the “general population” and its risky practices are ever more critical. Information about race and/or non-indigenous ethnicity will help raise HIV awareness in Afro-descendant and other communities, assisting their leaders and other decision makers in responding more effectively to the epidemic. Knowing and exploring how race, gender, and class intersect in the HIV epidemic will nurture the political consciousness of Afro-Central Americans with HIV, help improve the quality of their citizenship, and raise the standard of health care they receive.

M. Alfredo González, a medical anthropologist, has studied HIV and poverty in New York, Santo Domingo, and Rio de Janeiro. Mirtha Colón founded Hondurans Against AIDS 20 years ago and is its Executive Officer.