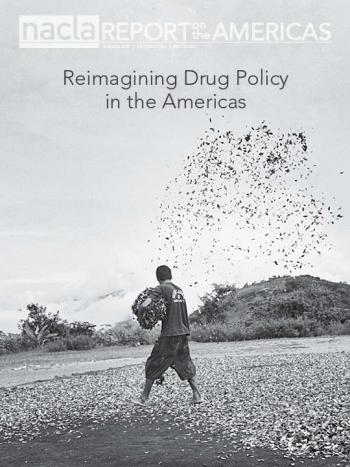 Latin America is now at the vanguard of international efforts to promote drug policy reform: Bolivia has rewritten its constitution to recognize the right to use the coca leaf for traditional and legal purposes, Uruguay has become the first nation in the world to adopt a legal, regulated Cannabis market, and Colombia, Mexico, Guatemala, and Ecuador are openly critiquing the prevailing international drug control paradigm at the UN. And now with the United States itself relaxing its marijuana laws state by state, the U.S. prohibitionist drug war strategies are losing credibility in the region.

Editor's Note
Colette Perold
It is in the context of his incredible leadership in the drug reform movement that we must grapple with President José Mujica’s global reception—one that is increasingly influenced by social media.

"Guerrillas Killed in Combat" and the Colombian Military's Persistent Impunity
John Lindsay-Poland
One of the largest recipients of U.S. military aid in the world, Colombia hosts a record number of extrajudicial killings—and an equal number of myths to ensure justice for victims’ families is rarely served.
Black Central Americans in the Struggle Against AIDS
M. Alfredo González and Mirtha Colón
The Garifuna and other Afro-Central American communities face a disproportionate rate of HIV infection, yet little data on these infection rates exists. Now the region’s black leadership is organizing to find out why.
Río Negro Survivors Rebuild and Face the State
Nathan Einbinder
Thirty-two years ago, Guatemala’s military police massacred over half of Río Negro’s Maya-Achi community, and relocated the rest. Today, those who remain seek justice.

Introduction
Linda Farthing
The colossal failure of militarized drug control promoted for decades by the United States is finally being recognized.
A Turning Point for Drug Policy
Coletta Youngers
At the levels of governance and civil society, Latin America has emerged as a world leader in the drug reform movement—while Washington suffers from a credibility problem.
A Painful Withdrawal: America's Addiction to Punishment
Rodrigo Uprimny and Diana Esther Guzmán
Drug addiction creates the need to consume more and more drugs, which have less and less effect. Something similar has happened with drug policy.
Interview with Former President Fernando Henrique Cardoso
Rebeca Lerer
Ordinary people and politicians alike are often wary of openly discussing drugs. But over the past three years, debates around drug policy have gone mainstream in Latin America.
An Interview with Former Trafficker Bruno
Robert Gay
On the changing drug culture of his Rio favela since the Pacifying Police Units (UPPs) were introduced.
Brazil's Militarized Crackdown on Drugs
Robert Gay
Brazil is now a major transshipment point for cocaine, and the federal government is mobilizing military forces in the favelas and on the border. As Brazil is compared with its powerful North American neighbor, some say it’s too little, too late.
Challenging Myths About Chapare Coca Paste Production
Thomas Grisaffi
The media casts coca growers in the Chapare region as 'nouveau riche' drug trafficking peasants, but most drug workers are young men without land or hope of decent jobs, not unionized coca growers.
Compassionate Cannabis
Linda Farthing
Why marijuana should cost as much as tomatoes, not gold, and how one medical cannabis dispensary occupies a legal grey area to make it happen.
Drug Law Reform in Mexico
Catalina Pérez Correa
To stymie the drug trade, Mexico needs to address criminal violence rather than detaining and processing petty criminals.
Ecuador's Pardon Laws
Coletta Youngers
In Ecuador, reducing sentences and releasing prisoners has diminished prison overcrowding and allowed for the reintegration of poor Ecuadorans into society.
How the Drug Trade Criminalizes Women Disproportionately
Corina Giacomello
Poor women across Latin America are triply discriminated against: within the drug trade, within the legal system, and within prison walls.
Interview with Former Trafficker Rosa Julia Leyva
Corina Giacomello
Rosa Julia Leyva Martínez spent 12 years in prison for transporting a few packets of heroin. Now she’s bringing a message of hope to thousands.
Interview with Mother-Activist Teresa Carmona
Zara Snapp
On living in fear in Mexico and how the drug victims’ movement is fighting back.
Peruvian Cocaine and the Boomerang of History
Paul Gootenberg
Washington’s most compliant Andean ally, Peru—not Colombia—is now the world’s leading source for cocaine on the global market.
Photo Essay: Coca Sí, Cocaína No
Bear Guerra
In his portraits of coca farming communities in Bolivia’s Yungas region, Bear Guerra exposes the human impact of both the U.S. war on drugs and Bolivian President Morales’ drug policy innovations.
Pioneering Cannabis Regulation in Uruguay
Hannah Hetzer and John Walsh
In 2013, Uruguay was the first nation in the world to legalize marijuana—not through ballot initiatives, but through deliberations within the national legislature.
Poetry: Noa Noa
Bocafloja
Bocafloja’s poetry explores the changing nature of conceptions of death in Mexico and the effect of living in a permanent state of terror as a consequence of repressive drug policies.
Reforming the Global Drug-Control System: The Stakes for Washington
Martin Jelsma
The question today is no longer whether there is a need to reassess and modernize the UN drug-control system, but rather when and how to do it.
The Criminalization of African American Males
Nicole Fabricant
In the 1980s, Neill Franklin went undercover to arrest both organized crime leaders and small-scale dealers. He now advocates drug legalization and job growth to reduce drug-related violence.
The U.S. Re-militarization of Central America and Mexico
Alexander Main
The Obama administration has expanded its financing of Mexican and Central American military forces—many of whom committed the mass killing and torture of political opponents and indigenous communities only two decades prior.
To the Beat of a Different Drum: Bolivia's Community Coca Control
Linda Farthing and Kathryn Ledebur
Bolivians are protecting their traditions and livelihood—and stopping drug trafficking simultaneously.

Immigration and U.S. Policy: Making the Connections
David L. Wilson
David Bacon’s The Right to Stay Home explores how the United States pushes free trade agreements such as NAFTA that drive so many Mexicans out of their home countries. In response, more Mexican activists today are advocating for the right to not migrate.
The (Institutionalized) Revolution Will Be Televised
Taylor Jardno
In “Muy Buenas Noches”: Mexico, Television and the Cold War, Celeste González de Bustamente traces back to the Cold War how Mexican broadcast journalism, dominated by Televisa, helped the PRI craft a cultural hegemony that founded decades of one-party rule.
The Forest Is Not Well
Paul N. Avakian
The documentary Heart of Sky, Heart of Earth, reminds us of the devastating destruction of nature caused by foreign industrialists from the United States and Canada, with the help of the Guatemalan government, on Mayan territory.