Fernando Henrique Cardoso, a sociologist, was president of Brazil from 1995 to 2002. He currently chairs the Global Commission on Drug Policy (GCDP).

RL: Besides being a producer and transit region, Latin America has a growing internal consumer market for drugs, with associated social and public health harms. What needs to be done to expand the public debate about all 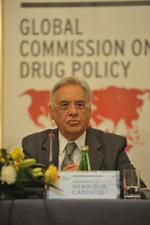 FHC: When I convened the Latin American Commission on Drugs and Democracy in 2008, we were deeply concerned with the threat to democracy and human rights raised by the violence and corruption associated with both drug trafficking and the war-on-drugs approach based on the criminalization of drug use. Over the last few years, this prohibitionist approach has generated expanding large-scale health and security problems in every region that becomes a transit route for illicit drugs, as is happening in Central America and more recently, West Africa.

Although directly affected, ordinary people are usually wary of openly discussing drugs. Politicians are even more so. And yet to the surprise of many, the debate about more humane and efficient drug policies, aimed at safeguarding people’s health and citizen security, has gone mainstream in Latin America over the last three years. Much credit for this amazing change should go to bold and pragmatic leaders such as Presidents Juan Manuel Santos from Colombia, Otto Pérez Molina from Guatemala and José Mujica from Uruguay.

RL: As a more robust debate on drug policy develops, especially stemming from Latin America, what do you think of the response by Europe and North America to date? What role should richer nations play in supporting and addressing the frustrations emerging from Latin American countries?

FHC: The paradigm shift underway in the United States, the main global driver of the repressive approach to illicit drugs in past decades, is likely to generate a positive impact beyond its national borders. As more U.S. states regulate cannabis for medical and/or recreational use, public support for major changes concerning marijuana prohibition now stands at over 55%. At the same time, ongoing reforms in the criminal justice system are finally addressing the problems created by mandatory sentencing and other legal inequities, and the public debate around harm reduction is growing. These changes will influence the entire international political momentum around drug policy reform.

Europe has important accumulated expertise on harm reduction policies and a tradition of decriminalization. Countries such as Portugal and Switzerland are role models for health-oriented drug policies. Their achievements in reducing overdose deaths, criminality, and HIV cases among drug users should be promoted and their know-how shared not only with Latin Americans, but also with Eastern European and Asian nations. However, despite these advances, Europe is experiencing its own growing regional health crisis with the rising HIV and Hepatitis C epidemics linked to injectable drug use in countries such as Russia and Ukraine.

At the diplomatic level, European countries should support Latin American and other members in their call for a transparent and balanced process in the build up to the UN General Assembly Special Session (UNGASS) on Drugs in 2016. This session will play a critical role in reviewing the current international drug policy regime.

We hope that established human and civil rights movements will realize the relevance of the drug reform agenda to Latin America’s and other regions’ social development. We are optimistic that they will embrace the urgency to end the war on drugs, redirecting public funds to health, education, and safety programs. The media also has a clear role to play, bringing the debate closer to the people with more comprehensive and balanced stories and coverage that goes beyond the usual narrative of crime and disease. What we need is broader discussion of how to reduce the social harms caused by prohibition and drug abuse.

RL: The Global Commission on Drug Policy has played a very important role in “breaking the taboo,” generating an unprecedented debate on drug policy in Latin America that is increasingly having international repercussions. Is meaningful reform within the UN drug control system possible? If so, what reforms are on the horizon in coming years?

FHC: Since 2011 when we organized the Global Commission to call for an end to the war on drugs, a lot has happened. We broke a taboo and now there is a quickly evolving political process that is creating global momentum for concrete change. While many options exist going forward, some priorities are clearly emerging. First and foremost is ending the criminalization of people who use drugs but do no harm. Second and more boldly, we must explore regulating problematic drugs according to the damage they cause people and societies, in ways similar to what has already happened with tobacco.

The 2016 UN special session offers a great opportunity to engage in honest and informed drug policy debate, one based on practical evidence rather than ideology. This chance must not be lost: all member nations should approach this process with a spirit of shared responsibility. Prohibition simply has not worked. But we are aware, of course, that there is no simple answer to an issue as complex as drugs. That is exactly why we expect like-minded countries to break the consensus that sustains the current prohibition regime, and offer the flexibility necessary so that each country can develop policies better suited to its own realities, based in health and human rights.

Rebeca Lerer is a journalist and the communications coordinator at the Secretariat of the Global Commission on Drug Policy in Rio de Janeiro.