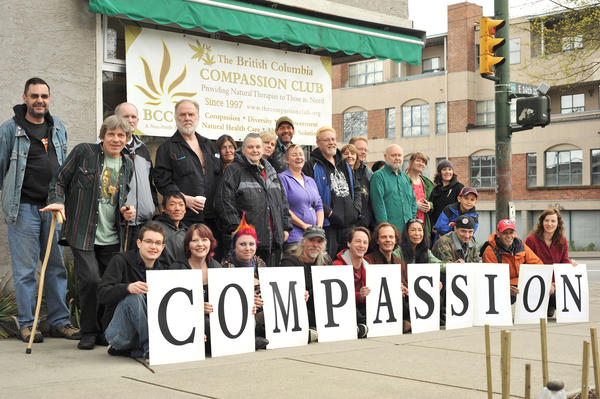 Members and staff of BCCCS at its thirteenth birthday celebration (BCCCS)

“Cannabis…helps me keep my weight up,” said Dwight Villeneuve to the Vancouver Sun in 2012. Villeneuve is one of the 10,000 members of British Columbia Compassion Club Society (BCCCS), based in Vancouver. Diagnosed with AIDS, he was given five years to live; he has now survived over 25. “Since getting AIDS I’ve lost 25 to 30 pounds, and so I use cannabis for appetite loss and to lessen how much morphine I take for pain.”

Dwight joined the BCCCS on the recommendation of his doctor, and he now sits on the non-profit organization’s board. “It’s become like my family,” he says. “Serving on the board allows me to give something back.”

Founded in 1997, the BCCCS is the longest-running medical cannabis dispensary in the Americas, and one of the largest in Canada. Conditions like Dwight’s are why most patients come to the BCCCS – they need safety-tested, high-quality medicine with education on effective use. Many are recommended by medical practitioners because of symptoms from cancer, HIV, AIDS, and Hepatitis C. These symptoms include chronic pain, nausea, anxiety, and appetite loss.

The BCCCS model is holistic, based on a price-subsidized Wellness Centre, where members receive treatments in ten different healthcare practices, from reiki to nutritional counselling.

Karim is a massage therapist at the center. “I wanted to see how people were treating themselves with cannabis and how it could be used topically in massage therapy,” he explained to me in an interview last February. “I was impressed at how BCCCS subsidizes the Wellness Centre so that people on low incomes can access alternative medical services.”

BCCCS Communications Coordinator Isaac Oommen stressed the importance of holistic treatment in an interview in early May: “Cannabis is not a cure. It alleviates symptoms, but combined with other treatments, we actually see condition management. The cannabis draws people in but with the Wellness Centre, we can do a lot more.”

Cannabis can be helpful with confronting addictions such as heroin, cocaine, speed, pharmaceuticals, and alcohol. “It is amazing to see the changes in people who are able to reduce and sometimes stop reliance on other drugs,” explains Oommen. “The only place we have seen contraindications are with schizophrenia and anti-psychotic medications.” 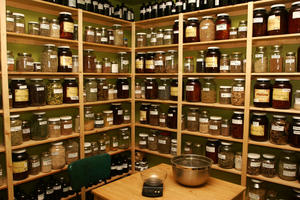 The BCCCS subsidizes medical cannabis for its members with a number of low-income strains.  “We hope that one day marijuana will cost as much as tomatoes, rather than gold,” Black continues. “So many of our members are in poverty and alone, which makes the community center aspect of the Compassion Club crucial. Many are completely disenfranchised from the health care system. When people can connect with each other, often across social and economic boundaries, we start having people getting married or finding roommates and building real community.”

“So many doors have closed to me since my spine injury that I want to shout from the mountaintops with my joy to have this one open!” says BCCCS member “JW” in a website testimonial. “In 2010 I rejected all pharmaceuticals and began the arduous task of withdrawing from extremely high doses of Dilaudid and other meds, which took several months. Cannabis got me through it. I have a great deal of life in me once again.”

The BCCCS works closely with contracted growers to check all supplies carefully for contaminants. A Vancouver lab works with the Society to make sure there are no molds, mildews, or toxins in their cannabis. A variety of products are available such as dry cannabis, hashish, edible products like cookies, alcohol-based tinctures, and topical applications. Every product that is offered is tested and weighted.

“What makes us unique is that we are run by consensus with a non-hierarchical structure in which staff work together to make decisions,” explains Oommen. “We work in departments and committees to take care of day-to-day work, and report back to the collective in weekly staff meeting. Patients who become members are involved in several ways—through the yearly Annual General Meetings where decisions are made on the Society’s future and on the Board of Directors which meets monthly.”

Compassion clubs such as the BCCCS exist in a legal grey area. Although Canada’s federal Conservative government does not acknowledge dispensaries, local governments such as that of Vancouver have recognized their value. City authorities recognize that the clubs are not part of the serious intravenous and pharmaceutical drug problem in Vancouver. The Society’s goal is to create a space where people can be free of the fear and stigma associated with breaking the law. Canada’s federal Senate Special Committee on Illegal Drugs commended the BCCCS as the best model of providing medical cannabis.

The Club sees its work as part of a larger political agenda. For BCCCS co-founder Hilary Black, the Club “will fight as long and as hard as necessary so that patients’ rights and choices are not compromised by repressive laws or corporate agendas.”

Linda Farthing is author of three books on Bolivia, the latest Evo’s Bolivia: Continuity and Change (Texas 2014), and a founder of the Andean Information Network.