U.S. journalist David Bacon’s new book on immigration begins with stench. Since the 1990s the Granjas Carroll de México company has been raising literally millions of pigs in the Perote Valley in Mexico’s Veracruz state. The smell is overwhelming. Some nights Fausto Limón and his family drive away from their farm and sleep in their old pickup to escape the fetid air from Granjas Carroll’s facilities. The problem is more than just a bad smell. The family suffered from kidney ailments for three years as the pig farms expanded, and Fausto’s mother eventually died of kidney failure. A doctor advised the family to stop drinking the water from their well; the kidney problems ended when they switched to bottled water. 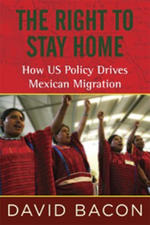 As Bacon explains in this compelling book, the polluting pig farms of the Perote Valley are just one example of how NAFTA—the North American Free Trade Agreement—has affected Mexicans since its start in 1994.

The Virginia-based corporation Smithfield Foods is a part owner of Granjas Carroll. NAFTA makes it highly profitable for Smithfield to site hog-raising operations in Mexico, taking advantage of lower wages and weaker environmental enforcement. NAFTA also lowers the cost of feeding the pigs, since “free trade” opens Mexico up to corn and soy from U.S. agricultural corporations. Mexico’s family farmers cannot compete with government-subsidized grain from north of the border; as a result, Mexico’s corn imports quintupled between 2002 and 2010, from 2 million tons a year to 10.3 million.

Before NAFTA, farmers in the Perote Valley had been able to make a modest living from their crops and livestock. “Sometimes the price of a pig was enough to buy what we needed,” former Perote resident David Ceja tells Bacon in the opening chapter, “but then it wasn’t.”

Fausto Limón and many other farmers have stayed in the valley, organizing with mixed results against Smithfield’s environmental violations and struggling to get by from what they could grow. Others followed David Ceja’s example: unable to make enough by raising pigs in Mexico, Ceja ended up butchering pigs in Tar Heel, North Carolina at a giant slaughterhouse owned by Smithfield.

“Now the boys I played with are all here,” Ceja says. “I see them working in the plant.”

Stories like Ceja’s are the main focus of The Right to Stay Home, a title that reflects the growing emphasis among Mexican activists on what they call el derecho de no migrar, the right not to migrate.

For the past three decades the U.S. government and media have promoted “free trade” policies in Latin America and the Caribbean that inevitably drive large numbers of people out of their home countries. At the same time that the United States deprives these people of their right to stay home, it uses harsher and harsher anti-immigrant measures to deny them the right to migrate legally. The result is the more than 11 million immigrants now living in the United States without legal status.

NAFTA is probably the most devastating of the U.S.-promoted policies for Mexicans, especially in its effect on farming. Bacon cites the dramatic fall of agricultural employment as the trade agreement kicked in. Farm sector jobs declined from 10.7 million to 8.6 million just from 2001 to 2008, according to Jonathan Fox of the University of California at Santa Cruz. The United States lost hundreds of thousands of manufacturing jobs to Mexico, as noted in a 2011 report from the Economic Policy Institute, but these were not nearly enough to offset the millions of jobs Mexico lost through competition from U.S. agricultural corporations and through other NAFTA effects, such as the intrusion of U.S. corporations into the retail sector. After displacing thousands of small stores, Walmart is now Mexico’s largest private employer.

NAFTA has turned out to be exactly the opposite of the “win-win” the politicians promised working people on both sides of the border 20 years ago.

Other U.S.-promoted neoliberal economic policies have had similar consequences. Bacon shows, for example, how the breaking of militant unions by a series of U.S.-backed Mexican presidents has made emigration an appealing option for formerly well-paid miners and electricians. When former president Felipe Calderón Hinojoso assaulted the powerful Mexican Electrical Workers Union (SME) in October 2009 by closing down a government-owned power utility—to cheers from the Wall Street Journal—he cynically offered the 44,000 laid-off workers a severance package that included English lessons.

David Bacon has decades of experience as a reporter and photographer covering the struggles of Mexican workers, both here and in Mexico. In striking contrast to the U.S. media, The Right to Stay Home lets us hear the thoughts and opinions of the workers themselves—their own explanations of why they would leave their homes and risk their lives crossing mountains and deserts to face the challenges of living in the United States as unauthorized immigrants.

Teresa Mina, an immigrant from Veracruz, describes the desperation that motivates some immigrants. “After my children’s father abandoned us, I decided to come to the U.S.,” she says. “There’s just no money to survive. We couldn’t continue to live that way. We all felt horrible when I decided to leave.”

Not all immigrants share Mina’s sense of desperation. David Ceja, the Perote Valley resident who ended up at Smithfield’s Tar Heel plant, does not talk about survival but about a declining standard of living. After NAFTA, he says, “we couldn’t pay for electricity—we’d just use candles at home. But when you see your parents don’t have any money, that’s when you decide to come, to help them.” Other immigrants are simply trying to move their families into a better situation. “In our case, we wanted to provide our child with an education,” immigrant Miguel Huerta tells Bacon. “He came to us when he was 17 years old and asked if we were able to send him to college…. But we didn’t have the money in Veracruz to send him to college. So I came to the United States.”

Ceja is clear on the factors that drive immigration: “The free trade agreement was the cause of our problems… It’s the poverty that recruits us. We all had to leave Veracruz because of it. Otherwise, we wouldn’t do something so hard.”

The workers have equally strong opinions about this country’s anti-immigrant measures. “This law is very unjust,” Teresa Mina tells Bacon. She lost her job as a janitor in San Francisco after immigration authorities ran a check on workers’ documents at her company. “We’re doing jobs that are heavy and dirty. We work day and night to help our children have a better life, or just to eat. My work is the only support for my family. Now my children won’t have what they need.”

“I don’t believe it’s the people of the United States who are aggressive toward Mexico,” Aldo González, an indigenous community leader in Oaxaca, tells Bacon. The problem is a lack of awareness, he says. “Many policies of the U.S. government don’t just affect people who are in the United States. They have very harmful consequences for people all over the world. It’s important for people in the United States to realize and be conscious of that.”

Bacon points to promising efforts to help U.S. citizens understand these realities. Some North American unions have started developing stronger ties with Mexican unions. Bacon notes that this sort of cross-border organizing was effective in the struggles of the Wobblies during the early 1900s and again in the creation of industrial unions during the 1930s. In a parallel development, some local union leaders have joined with grassroots immigrant rights activists in the Dignity Campaign, which promotes a real “comprehensive immigration reform”—one that addresses the causes of immigration instead of punishing the immigrants.

But these are still relatively small-scale efforts, mostly carried out by immigrants without broad support from other sectors of the population. The organizers face powerful opposition: a political class and a media establishment that do their best to obscure the connections between policy and immigration. Even native-born progressives and the larger pro-immigrant policy organizations have shied away from these issues. Throughout 2013 they expended crucial resources, both cash and the hard work of dedicated activists, in the drive to get an immigration bill through Congress—a bill which does nothing to address the underlying causes of immigration and, according to Bacon and many grassroots activists, only offers limited benefits to some unauthorized immigrants while actively making the situation worse for many others.

U.S. progressives have for the most part ignored the appeal that the “right not to migrate” analysis could have for a broad section of the U.S. population. After all, policies like NAFTA are wildly unpopular here, and it is not at all difficult to explain the connection with immigration; anyone who has tried can testify to how quickly people, especially young people, grasp the argument. Thousands of activists spent 2013 lobbying politicians around a flawed immigration bill. What would have happened if instead they’d been reaching out to the 99 percent with the ideas presented in Bacon’s book?

David L. Wilson and co-author Jane Guskin are working on a revised edition of The Politics of Immigration: Questions and Answers (Monthly Review Press, July 2007). Wilson also co-edits Weekly News Update on the Americas, a summary of news from Latin America and the Caribbean.