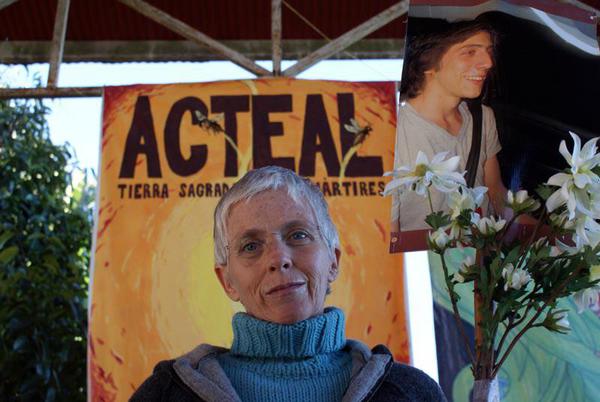 Teresa Carmona’s son, Joaquin, was a student at Mexico’s National University when he was murdered in a presumed drug war-related crime in 2010. Teresa has been active in the drug war victims’ movement, the Movement for Peace with Justice and Dignity (MPJD), since its founding in 2011. MPJD works towards peace amidst the militarization of the war on drugs.

ZS: What does it mean to work to end the drug war?

TC: For me, working to end the drug war is a moral issue. Having been directly affected because of the murder of my son, I do my best to prevent more deaths. This drug war has turned everything upside down. All of us in Mexico live in fear, but sometimes people don’t even realize it. People need to understand what is happening in Mexico. Often young men want to be hit men—they want to be drug dealers because they think it brings them money and respect. Even if they only live two months after becoming a drug dealer, that is enough for them.

We (Mexico) need our own regulation, because regulating drugs is a way to do damage control. For example, it is amazing how marijuana used medicinally helps people, but we are only starting to discuss this topic in Mexico. So many people involved in the drug war are criminalized and they shouldn’t be. During the tours and the caravans (the 2011 “Caravan of Solace” and 2012 “Caravan for Peace”), which have been important in raising awareness and empowering us as relatives of victims, we heard so much about the suffering caused by the drug war. The process served as an important type of therapy and support for us.

The drug war only benefits the government and industrial complex behind it—specifically the United States. Our government is engaged in a charade. Now and then, they look at us and pay a little attention, but only to be able to say they are taking care of the victims. The Mexican state refuses to acknowledge the new victims’ law and they are not looking for the 30,000 who have disappeared.

But we must change something here, and adopt a policy that responds to our needs and reality. We have to wean ourselves off the United States. I think we should start disobeying the United States and our own government. Civil disobedience involves a lot of work and strong organization and we are not quite ready for that. But I believe we are on our way towards it.

ZS: How has the drug war in Mexico affected working families?

TC: The drug war has affected everyone but in different proportions. Working class families are more criminalized than other classes and have fewer chances of finding justice. Things are so bad now money-wise that a lot of low income people are selling drugs. Many of them are using drugs because their reality is so hard and both parents have to work, leaving their children vulnerable. The drug war brings an incredible insecurity with it.

ZS: What does it mean to you to be part of the MPJD?

TC: Every step we have taken in the MPJD has been a step towards non-violence and helping the people who hear us to bring the truth to light. We have been carrying the pictures of our dead, our children, our parents, our neighbors, and telling their stories. I have been thinking about dead police officers and even the criminals. They were not criminals when they were born; the state has failed them. We have to make it up to them—to the innocent and to the guilty.

If I could tell people one thing, I would say be patient and remember that peace will not be here tomorrow. We are only beginning to plant the seeds and we have to tend to them, care for them, and that means not letting the awareness fade away. I will continue to pursue justice for my son. I don’t care if I have to wait 20 years. The truth will prevail.

Zara Snapp is a Mexico City-based social justice activist working on drug policy reform and human rights. She works with the Mexican Commission for the Defense and Promotion of Human Rights, CuPIHD, the Movement for Peace with Justice and Dignity (MPJD), and the Canadian Drug Policy Coalition.