Rosa Julia Leyva Martínez is a Mexican woman from a poor rural community in the southern state of Guerrero, a region plagued by poverty and full of opium poppy fields. She did not know how to read or write, but lived by making handicrafts: 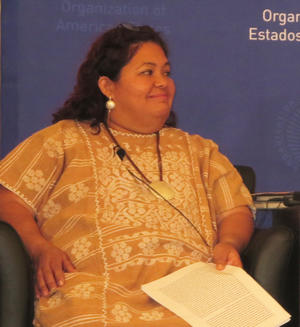 One day, in search of more handicraft material, she climbed aboard a truck heading for Mexico City. People she knew from her community on the truck offered her money if she would take a suitcase to the northern city of Tijuana. The suitcase contained various packets of heroin. That is how her torturous path through the prisons of Mexico began. Labeled a large-scale trafficker, even after several reductions in her sentence for “good behavior,” she spent the next 12 years and 3 months in prison.

I first met Rosa in 2005, when we were both enrolled in a course on human rights and women in prison. She had been released just a few months earlier. We have been friends since then, and all of her words below come from a series of interviews I conducted with her from 2005 until now.

When Rosa got out of prison in 2004, she went to live with her sister Vivian who had taken care of her daughter Karen since she was four. Rosa’s son Manolo had lived with her in prison until he was two, when her cousins took him home so that he would not grow up incarcerated.

“Manolo never lived with me again. He stayed with my cousins who were like parents to him. When I moved in with my sister, Karen was afraid of me and called me “Mrs.” (señora); she never called me mother. She still doesn’t, but slowly we’ve gotten to know each other. What I’ve most wanted is her love, and to give her mine.”

Rosa began to search for work in the flower shops at the large chain hotels.

“I passed all the tests they set for me. They then told me to go to Human Resources where my documents were examined, and they asked me for a letter that showed I had no prison record. I left and never went back. I was too afraid. It’s as if my sentence never ended. Only when I die will I stop having a prison record.”

With a great deal of effort, and the help of her sister, she opened a store in Xochimilco, a neighborhood in southern Mexico City. It was a small but beautiful shop with all her handicrafts on display. But she could not make enough money to survive.

“The store was great, but Xochimilco is a place where people only go on the weekends, so I could just make enough to pay the rent. I had to give up the shop and work as a street seller at markets around the city.

At the same time, I began to give talks about my experiences with incarceration with a photographer friend who I met in prison. I went to all the juvenile detention facilities in the country. If a kid hasn’t had any opportunities in life and has grown up in the midst of violence, when someone speaks to them kindly, they listen. I also gave talks in universities. I told them I hoped that what happened to me doesn’t happen to anyone else, because when you go to prison, the life you have dies and another much cruder life begins.

The worst part of prison is the nighttime. It’s worse than you could ever imagine. Everyone gets high, people kill themselves. No one sleeps, and the anxieties come: the monsters, the witches, all of which are nothing more than loneliness.

In 2010, I presented my story as an emblematic case to Mexico’s national Senate. I was approached there by the director of the federal prison system, who asked me for all my information and said he was going to give me a job. I thought it was just talk, but the Federal Police called me, and after passing exams, I began to work in the cultural activities section of the federal prison system. I’ve had this job for two years now.”

Rosa put together a workshop called “Stitching together my feelings.”

“In the first part of the workshop, I put music on and ask the prisoners to write about when they were children and skipped about in the fields. I ask if they remembered a Christmas Eve, or a part of their house they used to like the best. And I tell them I am there with them so that they can take me wherever they want to through their writing, and leave the prison behind. I’ve seen them—prisoners from maximum security—crying! Then I tell them my life story, and I tell them that, yes, they too will make it out one day. I tell them that being in prison is like going to the center of the earth and coming back out again. That’s what I did, and I’m pretty old now, but still alive. I went 12 years and 3 months without a visit and only saw my daughter once for two hours.”

Rosa and I board a plane for a conference in Washington, D.C. in late March 2014. In front of an auditorium full of ambassadors and officials from the Organization of American States (OAS), Rosa told her story. By the time she finished, many in the audience were wiping away tears, moved by this brave, enchanting and strong woman. Rosa Julia Leyva, the “dangerous drug trafficker,” became the bearer of a message of strength for thousands of people.

“The most important thing is to stand up to the blows that life gives you and never lose sight of the happiness life can bring. All those years in prison would have meant nothing if I weren’t standing up for incarcerated people today, bringing hope to women in prisons through the teaching I do now.”

Dr. Corina Giacomello has worked as a researcher on women and drugs in Mexico for the past seven years.