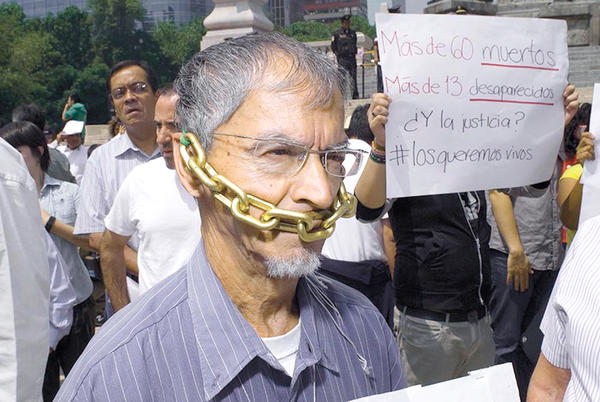 Both the war on drugs and the cruelty of drug warlords have profoundly marked Mexico. Security has become not only the center point of public debate but also the axis around which social life gravitates, marking peoples’ every-day behavior.

A 2013 national survey by Mexico’s National Institute of Statistics and Geography shows that nationally 57.8% of people over 18 consider insecurity and crime to be their home state’s main problem, even higher than the percentage of people that regarded unemployment (46.5%) or poverty (33.7%) as their principal concern. Over two-thirds of the respondents do not walk anywhere if they can avoid it, just under half no longer go out at night, and a third have stopped letting their children go outside.

Over 60,000 Mexicans were killed during President Felipe Calderón’s militarized war on drugs between 2006 and 2012. The number of homicides with the 2012 return of the PRI remains incredibly high, especially against women (according to the National Citizen Observatory of Feminicide, OCNF, nationally six women are killed daily). Meanwhile both extortion and kidnapping have increased since 2012. At the third anniversary of the Movement for Peace with Justice and Dignity (MPJD), poet and victims’ leader Javier Sicilia declared: “They owe us peace and justice, they owe us dignity, they owe us memory, they owe us reconciliation, they owe us everything…. The war and violence continue to pile up victims.”

Despite elevated citizen concern, the federal institutions that investigate and punish the most violent crimes and organized criminal groups are still mainly pursuing petty drug crimes and consumers. Drug laws remain ambiguous and their enforcement unclear. Recent reforms demonstrate little innovation and persist in promoting a punitive, tough on drugs stance, mainly focused on demand reduction. This is in spite of a 2009 legal reform, known as the Micro-Trafficking Law (Ley de Narcomenudeo), which was heralded as a watershed because it decriminalized the possession of small amounts of drugs, and decentralized drug control by shifting it from federal to state jurisdiction.

Throughout Calderón’s administration, both the number of anti-drug operations and army and navy participation rose exponentially. But instead of making the country safer, the presence of federal forces exacerbated the violence, spurring many incidents of illegitimate lethal force against civilians. As federal forces played a greater role in the war on drugs, so did accusations of human rights violations. Today, although the tendency has been to remove the military from the streets and from performing public security tasks, they still enforce drug laws. The major Mexican newspaper, El Universal, reported that during 2013 the military arrested almost 7,000 people in drug trafficking operations. The inertia around drug reform set by the previous administration will take time and political will to change.

The Ley De Narcomenudeo transferred responsibility for small-scale dealing to Mexico’s 31 states. New quantity thresholds distinguish between users, small-scale dealers (micro-trafficking), and more significant dealers (macro-trafficking). Below the threshold quantities set in the Federal Health Code, possession is considered to be for personal use and not punishable with prison sentences (although it will lead to arrest and may be administratively sanctioned). Above those quantities (but 1000 times below the threshold), possession is considered “petty dealing” or “micro-trafficking” and, with some exceptions, falls within the jurisdiction of the states. When quantities exceed 1000 times the user amount, cases become federal.

One of the law’s principal goals was to free up a federal system overburdened by possession and consumption cases. According to the Executive Secretariat of the National System of Public Security, in 2007, possession represented 88% of all drug cases handled by the federal Attorney General’s office, a percentage that dropped after the enactment of the 2009 law. But even by 2013, use and possession still constituted 57% of drug cases.

This continued high percentage of federal cases for possession and consumption results partially from the failure of many states to reform their internal statutes so they can exercise their new responsibilities. According to a 2013 report by the Center for Research and Teaching in Economics (CIDE), by 2013, fully one third of Mexico’s states still had not changed their criminal codes, generating legal ambiguity both for authorities and citizens. In addition, the authorities enforcing the laws are extremely bureaucratic, corrupt, and have poor investigative capacities.

Every crime reported to the public prosecutor is given the same priority, whether it is a petty crime like stealing a wallet, or kidnap, or homicide. In a context of scarce resources and corruption, it is usually the easy cases, those with a suspect detained in flagrancia (while being committed) that get “solved” and punished. As CIDE legal researcher Ana Laura Magaloni points out, “while crime has become more complex and sophisticated, Mexico’s institutions continue to operate as they did 30 years ago.”

Not only are small-scale dealers still being pursued, but many drug consumers continue to be criminalized. From 2006 to 2013, over 140,000 people were processed for consumption. Another 300,000 people were processed for possession. Despite the pressing need for crime prevention and the curbing of drug cartel power, federal penal institutions—which exist to process the most serious crimes and dangerous criminals—still function mainly to persecute and sanction consumers and petty dealers. While Sinaloa cartel kingpin Joaquín “El Chapo” Guzmán was arrested—again—many more impoverished users continue to clog the system.

Like in many other parts of Latin America, most drug crimes in Mexico are currently treated more harshly than other serious crimes, demonstrating not only the gross disproportionality of drug laws, but also the abuse of the criminal justice system and the poor management of national resources. Under current laws, the production, traffic, and commerce of illicit drugs is more severely punished than the rape of a minor or the possession of a military weapon—both of which are arguably more harmful and dangerous to society than drug trafficking. Violent theft receives a maximum sentence of 15 years—10 fewer years than production, traffic, and commerce. The solution is not to raise the sanctions for violent crimes, but to explore alternatives for regulating drug use. Sanctions must be proportional to the crime—and harm—done.

In recent years, efforts have been made to move away from mandatory minimum sentences that impose draconian sanctions and from policies that depend on the criminal justice system to reduce drug use. An example is the initiative—introduced this past February, and now being discussed in local congress—to regulate cannabis use in Mexico City. Another is the federal initiative to raise the thresholds set by the small-scale dealing law and reclassify cannabis as a substance with therapeutic value. Both initiatives have encountered strong opposition from adherents to prohibition.

Another recent innovation is the embrace of U.S.-style drug courts (also adopted in Chile and Brazil), after a strong push from Mexico’s U.S. Ambassador and the OAS’s Inter-American Drug Abuse Control Commission. The courts are part of a new National Criminal Procedure Code enacted March 5, 2014, that has raised expectations of greater cross-jurisdictional uniformity, legal consistency, and a drop in criminal justice corruption. With the new code, criminal trials held nationally will be public, a novelty for Mexico’s inquisitorial legal system. The government hopes drug courts will also save money. “I can guarantee that this system is much cheaper than keeping someone in prison,” says Undersecretary of Crime Prevention and Civic Participation, Roberto Campa Cifrián.

The only existing drug courts—or Addiction Treatment Tribunals, as they are called in Mexico—function in pilot form in the northern state of Nuevo León. The courts address non-serious crimes (not necessarily drug crime) that have been committed under the influence of legal and illegal substances. As documented in the forthcoming book In Search of Rights: Consumers of Illicit Drugs in Mexico and State Responses, 86% of the cases underway by late 2013 were for alcohol and 7% for marijuana, pointing to what other data has consistently shown: that alcohol is the substance most linked to crime. The program has not yet been evaluated, the results so far are inconclusive, and the costs and treatment approach are unknown.

The hope is that drug courts will alleviate the overloaded criminal justice system, permitting institutions to focus on more serious and pressing cases. However, the courts are unlikely to reduce prosecutor workload, as they will still have to process these cases. It would not change the way the police work either, as they will continue to arrest consumers and pretty criminals. Only a partial drop in judiciary workload can be expected as criminal judges still have to determine if deferring cases to a drug court is warranted. Expulsions from the program will mean more, not less, work for judges who will have to oversee cases for longer periods.

Where the drug courts have the most potential to make a difference is at the end of the line, in prison, as drug offenders will be forced into treatment. Campa Cifrián is certain that the new system “will guarantee that only the people who need to be in jail will end up in jail.”

The new model is a double-edged sword for drug users. Granted some people will avoid prison time, but those expelled from the program will be subjected to the criminal justice system for longer than they otherwise would be if the procedure had followed its ordinary course. Even though the new code prohibits double jeopardy, this is precisely what Addiction Tribunals do in cases of expulsion: they subject people to two trials and two punishments for the same crime. In the United States, on which Mexico’s system is partially based, drug courts have been severely criticized for criminalizing both non-problematic and problematic drug users. Opposition to the drug courts often offers a public health approach as an alternative.

The growing consensus is to move away from “one size fits all” solutions and to implement policies that take into account local possibilities. Mexico’s gravest, most pressing need is to rid the country of violent organizations and the brutal crimes they commit; it’s policies and institutions therefore should be aiming to reduce, not create, a new bureaucracy that criminalizes consumers. Addressing this violence, along with the availability of smuggled guns from the United States, is what requires the bulk of new government resources—not the detention and processing of petty criminals. Drug laws that equate rape with non-violent drug crimes are irrational and immoral. As long as we continue to renounce regulating a market that has only grown while being illegal, and to wait for guidelines from the United States, the Mexican government’s control will remain fragile, and its capacity to respond to social needs, inadequate.

Catalina Pérez Correa is a professor and researcher at the Centro de Investigación y Docencia Económicas (CIDE) in Mexico City.