The Criminalization of African American Males 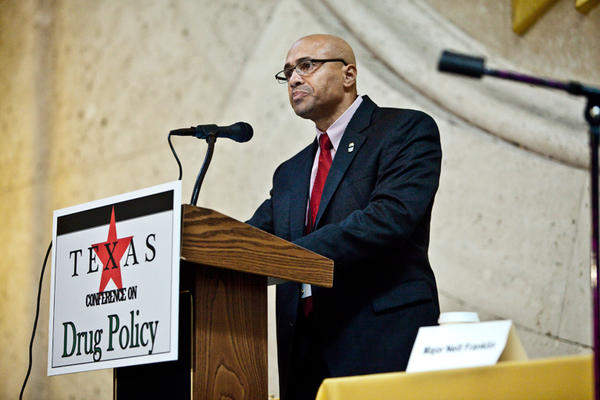 Nicole Fabricant interviewed Neill Franklin, a 33-year Maryland State police veteran who led anti-narcotics task forces. After seeing so many colleagues killed in the line of fire, Neill left the police force to lead Law Enforcement Against Prohibition (LEAP), which represents police officers who believe in drugs regulation. He is featured in the 2011 film Cocaine Unwrapped.

Can you start with some of the early history of the drug trade in Baltimore?

Post-slavery blacks began moving north because the factories were booming, but in most of these cities, there were designated areas where we could live. My family moved right into the center of Baltimore in the late 1950s. The city was a major port, with a steel industry, shipbuilding, and companies like Domino Sugar, which thank god is still here!

My brother used to work for Western Electric. My dad was a longshoreman, so there was plenty of work for him down on the docks. We had friends who used to work for General Motors and out at the shipbuilding facility at Sparrows Point.

When I was too young to work, the fathers in my neighborhood were employed at these places and expected that this was where their sons would work. These weren’t dead end-type jobs. It was good money! Unions made sure that working conditions were safe, and that the pay remained competitive. But the jobs were outsourced, eventually going to countries where labor was much cheaper. When the steel industry left, it literally crippled Baltimore. This is what happened all around the country.

Of course there had always been an illegal drug market, but because jobs were so plentiful, few people were involved, and only a handful of local organized crime organizations controlled the flow, principally of heroin—the notorious “Little Melvin” Williams, Peanut King, and those folks. Many heroin users worked fulltime jobs, which meant they could pay for their addictions. But the problem started when unemployment started surging. Some, like my dad, participated in the illegal numbers racket to supplement their income. Others went into the drug business.

Prior to the early 1970s, local law enforcement paid very little attention to drugs. To President Nixon’s credit, most of the early War on Drugs money designated for the states was earmarked for drug treatment rather than punitive repression. But local police departments and jurisdictions wanted those federal dollars, so we started working actively to dismantle drug organizations. Ever since, the feds have bribed law enforcement so we’ll continue to participate.

Were you already in the police force at this point? Can you describe how you saw the drug trade change during your years on the force?

I started in the police force in 1976 and went undercover in 1980. We started a vicious cycle of arrest. We first targeted major organizations, but then we got this brilliant idea to go after the “demand side.” And then it was like a firestorm. We would start with low-level dealers, mainly black and mainly young men. We’d pinch them and drop the hammer on them, getting as many as possible behind bars, so we could work our way up the organization.

In the 1980s, the crack epidemic exploded and we started mandatory minimum sentencing, especially federally. There was no science behind it, there were no studies behind it—it was all emotionally driven. And now that the data’s available, we see exactly what we did. As the Baltimore population dropped from a million to 600,000 people, we ended up with entire blocks that were empty, with all the deplorable conditions that come with that. Drugs and drug dealing took the place of industry. Drugs became the number one job to get.

When major drug organizations controlled the trade, there wasn’t much open, out-in-the-street-type violence. Even though a lot of dealers got murdered, you could still walk and your kids could play in the streets without fear of gunfire. But when we dismantled these six or seven criminal organizations, we saw the growth of 600 small groups all fighting for control. That’s exactly what happened in Mexico when they adopted our philosophy. You cut off the head and seven more grow.

So now the best way to defend your territory is to arm yourself. And here’s where kids—some eight or nine years old—become critical. They’re impressionable and easily influenced. They’re not going to argue with you. They look up to you because they see that you’ve got power, that you can get them things. If I’m a dealer who has recruited a young kid, I’m not going to put him out selling right away. Rather, I’ll have him hang out on the corner and let me know if a rival dealer or the police come. I’ll give him 20 bucks or buy him a pair of sneakers. The next step is to “run a package” and by the age of 11 or 12, he’s selling.

These days, very few African Americans own a business, unless it’s a drug business. If you go back to the 1950s and 1960s, in many black communities, we had lots of store owners, doctors, dentists, and we as children looked up to those people. They’d hire you to sweep the floors, and so on—it’s the same thing in the drug trade. Drug dealers are today’s neighborhood business owner.

When we started arresting these fathers and heads of households, the mother often had to find employment, cleaning floors or something. That made the children especially vulnerable to the neighborhood crime. And when the men come out of prison, often with ties to a criminal organization, they become incredibly frustrated because they can’t find jobs and get back with the family. The mother is often in public housing somewhere, and he’s not allowed inside because he’s a convicted felon. So he can’t live with his family and he can’t find a job to move them out of public housing so that they can live together. So many men are trapped in this cycle. Even those who really strive to get back on their feet find it virtually impossible and revert back to selling drugs.

Would you say that some of that reversion to selling drugs is because there weren’t sufficient rehabilitative services?

You can have all the rehabilitative services in the world, but if you do not have job placement with someone willing to hire a convicted felon, what’s the point? But the real question is: did we really have to imprison this person in the first place? Don’t get me wrong, if you’re out there shooting people, we’ve got to separate you from society. But you have to ask the larger strategy questions: Does the prohibition of drugs accomplish the goals we set out? Do we have less crime? Fewer drugs on the streets? Are the drugs less dangerous? Do you have a decreased overdose death rate? And the answer to all of that is no! So, why are we continuing to do this?

Obviously there’s lots of money behind maintaining the drug trade, and we’ve also been doing it for so long that people think we would be sending a message that’s morally wrong if we change the laws. But we’ve got to separate legislation from morality. What we’re really dealing with here are consensual adult activities that we have turned into crimes.

If we change the law, we will change the relationship between the community and the police. Because now the police benefit—every time you turn around there’s a story in the Baltimore Sun about corrupt police officers, getting information and protection for drug dealers. Most people are not going to work with the police on drug crimes because they’re scared of retaliation, and the police can’t protect them. I’ve seen whole families killed because the mother was trying to get dealers out of her neighborhood.

And as a community member, I might not cooperate with the cops because it might be my nephew or son out there selling drugs. For families that are barely making it, many come to accept the fact that the extra $400 a month, or even a week, that they receive is because they’ve got a son out there in that dangerous business. If we can get the drug industry out, we’ll be extracting a cancer that will allow a community to heal. By reducing the violence, businesses will be able to come in again and help stabilize the neighborhood.

Legalizing drugs is not a panacea, but it’s something that has to be done for us to move forward. When you really peel back this onion to the core, we have policies that have fragmented and destroyed the family units of particular groups of working people. These devastated communities and families are going to need mental health services, literacy programs, high-level treatment programs, on-demand treatment programs. You’re going to need to overhaul the whole educational system. We’re talking about a generation, okay, that’s the time frame—a generation that’s going to embrace these pre-school kids all the way through the educational system. That’s the way we will bring about change.

Nicole Fabricant is an Assistant Professor of Anthropology at Towson University, a member of NACLA’s editorial committee, and author of Mobilizing Bolivia’s Displaced: Indigenous Politics and the Struggle Over Land (UNC Press 2012).