The Blue Tiger and the Promised Land


Fine words and pretty ceremonies are about to descend upon us: The five-hundredth anniversary of the so-called Discovery is approaching. I think Alejo Carpentier was right when he called this the greatest event in the history of humankind. But it seems strikingly clear to me that America wasn’t discovered in 1492, just as Spain was not discovered when the Roman legions invaded it in 218 B.C. And it also seems clear as can be that it’s high time America discovered itself. And when I say America, I’m talking first and foremost about the America that’s been despoiled of everything, even its name, in the five-centuries-long process that put it at the service of foreign progress: our Latin America. 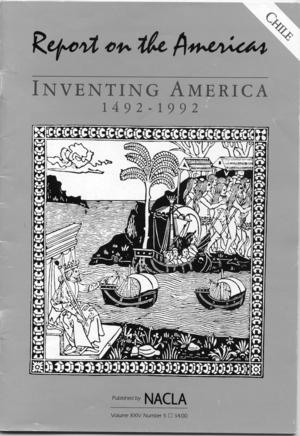 This necessary discovery, a revelation of the face hidden behind the masks, rests on the redemption of some of our most ancient traditions. It’s out of hope, not nostalgia that we must recover a community-based mode of production and way of life, founded not on greed, but on solidarity, age-old freedoms, and identity between human beings and nature. I believe there is no better way to honor the Indians, the first Americans, who from the Arctic to Tierra del Fuego have kept their identity and message alive through successive campaigns of extermination. Today they still hold out vital keys to memory and prophecy for all of America, not just our Latin America: Simultaneously, they bear witness to the past and cast the light of fresh fires on the path ahead. If the values they embody were of only archaeological interest, the Indians would no longer be objects of bloody repression, nor would the powerful be so anxious to separate them from the class struggle and from the people’s liberation movements.

Halfway through the last century, an Indian chief named Seattle warned officials of the United States government: “After several days, the dying man does not smell the stench of his own body. If you continue polluting your bed, one night you will die suffocated by your own wastes.” Chief Seattle also said, “Whatever happens to the earth, happens to the sons of the earth.” And I have just heard this same phrase, exactly the same, from the lips of one of the Maya-Quiché Indians in a documentary filmed recently in the mountains of Ixcán, Guatemala. This is how the Mayas explain why their people are hunted down by the army: “They kill us because we work together, eat together, live together, dream together.”

What dark threat emanates from the Indians of the Americas, what threat treacherously lives on despite the centuries of crime and scorn? What ghosts are the executioners exorcising? What fears?

To justify usurping the lands of the Sioux Indians at the end of the last century, the United States Congress declared that “community property is dangerous to the development of the free enterprise system.” And in March 1979, a law was promulgated in Chile requiring the Mapuche Indians to divide up their lands and turn themselves into small landowners with no links among them; the dictator Pinochet explained that the communities were incompatible with the nation’s economic progress. The U.S. Congress was right. So was General Pinochet. From capitalism’s point of view, communal cultures that do not separate human beings from one another or from nature are enemy cultures. But the capitalist point of view is not the only one.

The official story of the conquest of America has been told from the perspective of mercantile capitalism in expansion. It takes Europe as its center and Christianity as its only truth. This is essentially the same official story, after all, that is told of the “reconquest” of Spain by Christians against “Moorish” invaders, a way of disqualifying Spaniards of Muslim culture who had been living in the peninsula for seven centuries when they were expelled. The expulsion of these supposed “Moors,” who had nothing Moorish about them, along with Spaniards of Jewish faith, signaled the triumph of intolerance and sealed the ruinous history of the very Spain that discovered and conquered America. A few years before friar Diego de Landa cast the books of the Mayas into the flames in Yucatán, Archbishop Cisneros had burned the Islamic books in Granada, in a great bonfire of purification that blazed for several days.

The official story repeats the ideological alibis of the usurpers of America, but in spite of itself it also reveals the reality that it contradicts. That reality, burned, banned, and falsified, emerges in the shock and horror, the outrage, and also the awe of the chroniclers of the Indies when they came face to face with those beings that Europe, the Europe of the Inquisition, was in the process of “discovering.”

The Church acknowledged in 1537 that the Indians were persons, endowed with soul and reason, but it blessed the crime and pillage: The Indians were persons, but persons possessed by the devil and therefore without any rights. The conquistadors acted in the name of God, to root out idolatry, and the Indians gave continuous proof of their irremediable perdition and irrefutable causes for condemnation. The Indians did not know private property. They did not use gold or silver as money, but to adorn their bodies or pay homage to their gods. Those false gods were on the side of sin. The Indians went around naked: The spectacle of nudity, warned Archbishop Pedro Cortés Larraz, causes “much injury to the brain.” Indissoluble marriage bonds did not exist anywhere in America, and virginity had no value. On the Caribbean coasts and in other areas, homosexuality was unrestrained, and this offended God as much as or more than the cannibalism of the Amazon jungle. The Indians had the unwholesome habit of bathing every day and, to cap it all, they believed in dreams. Thus the Jesuits were able to confirm the influence of Satan on the Canadian Indians: Indians so diabolical they had interpreters for the symbolic language of dreams, because they believed that the soul speaks while the body sleeps and that dreams express unfulfilled desires. The Iroquois, Guaraní, and other American Indians elected their chiefs in open meetings, where women took part as men’s equals, and removed them from office if they became overbearing. No doubt possessed by the devil, Chief Nicaragua asked who had elected the king of Spain.

The purifying mission of Civilization no longer masks the plunder of gold or silver: Under the banner of Progress, onward march the legions of modern pirates, without hooked hands, eye patches or wooden legs, the multinationals that swoop down on the uranium, petroleum, nickel, manganese, tungsten. The Indians suffer, as before, the curse of the wealth of the lands they inhabit. They were driven toward arid soil; technology has discovered, beneath those soils, fertile subsoils.

“The conquest isn’t over,” gaily proclaimed the advertisements published in Europe 11 years ago, offering Bolivia to foreigners. The military dictatorship held out to the highest bidder the richest land in the country, while treating the Indians the same as in the 16th century. In the first phase of the conquest, Indians were compelled to describe themselves in public documents, “I, wretched Indian . . . ” Now the Indians only have the right to exist as servile labor or tourist attractions.

“Land is not sold. Land is our mother. You don’t sell your mother. Why don’t they offer $100 million to the Pope for the Vatican?” a Sioux chief asked recently in the United States. A century earlier, the Seventh Cavalry had ravaged the Black Hills, sacred territory to the Sioux, because they held gold. Now multinational corporations mine its uranium, although the Sioux refuse to sell. The uranium is poisoning the rivers.

A few years ago, the Colombian government told the Indians of the Cauca valley, “The subsoil does not belong to you but to the Colombian nation,” and immediately turned it over to the Celanese Corporation. After a time, part of the Cauca had been turned into a lunar landscape. A thousand hectares of Indian land were made barren. In the Ecuadoran Amazon, oil is dislodging the Auca Indians. A helicopter flies over the jungle, with a loudspeaker announcing in the Auca language, “It’s time to leave now.” And the Indians obey the will of God.

From Geneva, in 1979, the United Nations Human Rights Commission warned: “Unless the Brazilian government alters its plans, we can expect that the largest of the surviving tribes will cease to exist in twenty years.” The Commission was referring to the Yanomami, in whose Amazonian lands tin and rare minerals had been discovered. For the same reason, the Nambiquara Indians now number fewer than 200, and they were 15,000 at the beginning of the century. Indians die like flies when they come in contact with unknown bacteria brought by the invaders, as in the days of Cortés and Pizarro—a process now speeded up by Dow Chemical’s defoliants, sprayed from the air. When the commission launched its pathetic warning from Geneva, FUNAI, the official body for the protection of Brazil’s Indians, was run by 16 colonels and employed 14 anthropologists. There has been no change in the government’s plans since then.

Throughout America, from north to south, the dominant culture acknowledges Indians as objects of study but denies them as subjects of history: The Indians have folklore, not culture; they practice superstitions, not religions; they speak dialects, not languages; they make handicrafts, not art.

Perhaps the approaching celebration of the 500th anniversary could help turn things around, so topsy-turvy are they now. Not to confirm the world, adding to the self-importance, the self-glorification of the masters of power, but to denounce and change it. For that we shall have to celebrate the vanquished, not the victors. The vanquished and those who identified with them, like Bernardino de Sahagún, and those who lived for them, like Bartolomé de las Casas, Vasco de Quiroga, and Antonio Vieira, and those who died for them, like Gonzalo Guerrero, the first conquered conqueror, who ended his days fighting at the side of the Indians, his chosen brothers, in Yucatán.

Eduardo Galeano is a Uruguayan author and journalist. His most recent book is Los hijos de los días (Siglo XXI Editores, 2012). This is an excerpt of an article that was originally printed in the February 1991 NACLA Report on the Americas.