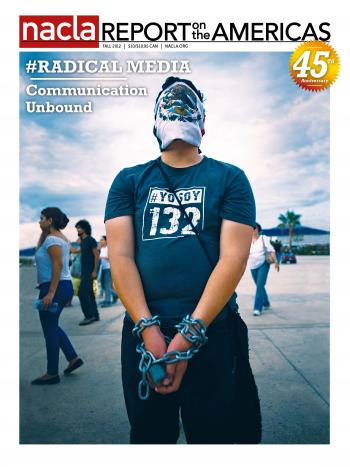 The 21st century has transformed how we communicate. Grassroots movements, organizations, and individuals are using social media and new and accessible technology to stand up to repressive political and economic systems. In Colombia, Mexico, and Brazil, journalists risk their lives to write the news. Elsewhere, governments attempt to rein in the power of media conglomerates and democratize the airwaves. At the heart of this NACLA Report is the question of who gets to tell the story and how.

Obama's Immigration Reform for Youth: A DREAM Deferred?
Joseph Nevins
On August 15, the Obama administration launched the new federal program Deferred Action for Childhood Arrivals. It allows young immigrants living in the United States without government authorization to apply for “an exercise of discretion,” that is, a deferral of their would-be deportation and a two-year work permit—if they meet certain conditions.

Outing' Honduras: A Human Rights Catastrophe in the Making
Suyapa Portillo Villeda
Now that President Obama has come out in support of marriage equality, and Secretary of State Hillary Clinton has dedicated a small budget to defend LGBT rights internationally, it’s the perfect time to remind them that the abuse and killings of gay and transgender people keep piling up in Honduras—even as Washington heralds the country’s return to “democracy.”

Paraguay’s Ongoing Struggle Over Land and Democracy
Kregg Hetherington
The unlikely presidency of Paraguay’s Fernando Lugo came to an abrupt end June 22 in an impeachment hearing. The “parliamentary coup,” as critics call it, marked the end not only of Lugo’s presidency but revealed the fragility of Paraguay’s democratic institutions and the ease with which the state might slip back into being the plaything of warring clubs of paternalistic elites

Carbon-Offset Conservation in the Chocó
Autumn Spanne
The Chocó rainforest is one of the most biologically diverse places on earth, but an alarming rate of deforestation now threatens the region’s unique ecosystems as well as the traditional black and indigenous communities that have been stewards of this land for hundreds of years. In response, residents from a network of about three dozen traditional Afro-Colombian communities, collectively known as Cocomasur, are participating in an innovative conservation program that they hope will both curb deforestation and affirm their legal right to the land.
Reducing Emissions From Deforestation and Forest Degradation (REDD)
Autumn Spanne
Deforestation accounts for about a fifth of all global carbon emissions, second only to the burning of fossil fuels, according to the United Nations Framework Convention on Climate Change (UNFCCC). But ever since the Kyoto Protocol was drafted in 1997, countries have been divided over how to incorporate forest protection into global emission-reduction plans.

Why Build a Border Wall?
Reece Jones
We live a world of borders and walls. Invariably, the barriers are justified in the language of security—the country must be protected from the terrorists, drug cartels, insurgents, or suicide bombers lurking on the other side. Despite the external focus of these justifications, in most instances these walls and fences are actually the result of the internal politics of the state that builds them.

Fifty Years of Caribbean Independence: Real and Imagined
Kevin Edmonds
In August, Jamaica and Trinidad and Tobago commemorated their 50th anniversaries of independence. It was a time of celebration, the date marking the end of colonial British rule and the forging of proud national identities.Yet, considering the erosion of opportunities in these countries, the celebrations took place amid a deep irony.

#Yosoy132
Luis Gómez
With social media and street protest, Mexican students are building a vibrant grassroots movement to challenge the country’s political and economic system.
Colombia, Mexico, and Brazil: The Deadliest Countries in the Hemisphere for Journalists
Carlos Lauría
Many reporters have been killed or cowed into silence. Others have abandoned their profession or gone into exile.
Democratizing the Media: An Interview with Carlos Ciappina
Alexandra Hall
The right to communication means that you don't just have free speech, but also access to the means of communication.
Human Mic: Technologies for Democracy
Rossana Reguillo
“Mic check!” The Occupy movement has created a new medium for collective listening.
Introduction
Mario A. Murillo
New media forms are being applied by diverse actors, slowly tipping the balance of media power in favor of the active, engaged citizen across the continent.
Media and Democracy in Bolivia
Alfonso Gumucio Dagron
The recent TIPNIS conflict offers a glimpse into the role of media and democracy under President Evo Morales.
Nasa: Communication for Life
Emmanuel Rozental and Vilma Almendra
The Nasa people have transformed the use of electronic media, placing it at the service of their communities.
Print Media Withers in Bolivia, While Radio Thrives
Alfonso Gumucio Dagron
During the first decade of the 21st century, Bolivia’s “classic” newspapers have disappeared.
South America: A Panorama of Media Democratization
Alexandra Hall
Media in Latin America have traditionally been consolidated into the hands of a few wealthy families and large media conglomerates. Over the last decade and a half, however, several governments in the region, including Venezuela, Ecuador, Argentina, Bolivia, and Uruguay, have moved to democratize media.
The Captured Truth in Venezuela
Maryclen Stelling
Venezuelan citizens are caught in a media war, in which the reporters are the soldiers and information is the weapon.
The Medium Is the People
Lizabel Mónica
Cuban digital networks are not only supported by modern technology but by direct exchanges among people.
Video Advocacy and Forced Evictions in Brazil: An Interview With Tiago Donato
Kyle Elizabeth Barron
Groups in Rio de Janeiro are using media to stop evictions in the lead-up to the World Cup and Olympics.
Where the Roads Don’t Reach: Community Radio in the Aysén Uprising
Carlota McAllister
In February 2012, the Chilean Aysén province awoke and the ubiquitous sound of Radio Santa María was there to connect the people.

Benedetti: A Lifetime Believing the Unbelievable
Clifton Ross
As an old man who remained a faithful poet and revolutionary to the end, even in the painful last years of his life, he maintained that “maybe happiness is nothing more / than believing we believe the unbelievable.” And perhaps that is Benedetti’s lasting gift: His humane vision allows us to believe the unbelievable to be possible.
In the Journals
Bryan Finlayson
Living ‘Illegal,’ Living With Dignity
Raúl Alcaraz Ochoa
The authors of Living “Illegal” have made a significant attempt at humanizing an immigration debate that has lost all humanity in mainstream politics. They delve into the lives of ordinary migrants and paint a moving picture that defies the polarizing, hateful, stereotypical debates over immigration. Living “Illegal” sheds insightful light on what it means to live in the shadows of “America.”
New & Noteworthy
Resistance Struggles for National Salvation in Puerto Rico
Juan Antonio Ocasio Rivera
University of Puerto Rico sociology professor Michael González Cruz follows up his 2006 title Revolutionary Nationalism with A plena voz: nuestra resistencia 2005–2010, once again directing a frontal assault on colonialism and political repression in Puerto Rico.
Zeta: Free Speech in an Era of Repression
Arturo R. Conde
Reportero (Reporter), a documentary directed by former NACLA staff member and documentarian Bernardo Ruíz, exposes years of government corruption in Mexico that led to violence against Mexican journalists in the 1980s and more recent drug war violence against the media today.

Our Resistance: An Interview With Rafael Cancel Miranda
Juan Antonio Ocasio Rivera
Rafael Cancel Miranda is an iconic figure in his beloved Puerto Rico. Part of the nationalist commando attack on the U.S. Congress in 1954, he served 25 years in prison with his comrades until pardoned and released by President Carter in 1979 amid intense international pressure. Coming from a staunch nationalist family background, Cancel Miranda is now the elder statesman of the Puerto Rican independence movement, providing guidance and at times fiery motivation.

Fernando Coronil: A Brief Appreciation
Charles L. Briggs
It would be impossible to summarize Fernando Coronil’s work in a short essay, particularly when so little time has elapsed since his sudden death in August 2011. I thus offer a few reflections here on dimensions of his work that have provided challenges to my own scholarship.

The Blue Tiger and the Promised Land
Eduardo Galeano
It’s out of hope, not nostalgia that we must recover a community-based mode of production and way of life, founded not on greed, but on solidarity, age-old freedoms, and identity between human beings and nature.