In Adiós Muchachos, author Sergio Ramírez—a former Nicaraguan revolutionary and Sandinista vice president (1985–90)—shares his most vivid memories of the Sandinista Revolution. Ramírez takes readers back in time to the initial stages of the revolutionary Sandinista movement, which culminated in the 1979 coup d’état that successfully overthrew the dictatorship of Anastasio Somoza. He recounts how the struggles of the guerrilla permeated his family life, affecting loved ones, his children, and their friends. Through this chronological memoir, Ramírez describes the revolution’s ideological, political, and economic hardships and the United States’ support for the Contras.

In this new edition of the book—the first was published in 1999—Ramírez also analyzes more recent political developments in the country. Ramírez also describes his own defection from the Sandinista National Liberation Front (FSLN) in 1995 and his participation in founding the Sandinista Renovation Movement (MRS) that same year. This book is a voyage into the inner workings of the revolutionary movement in Nicaragua during the Cold War. 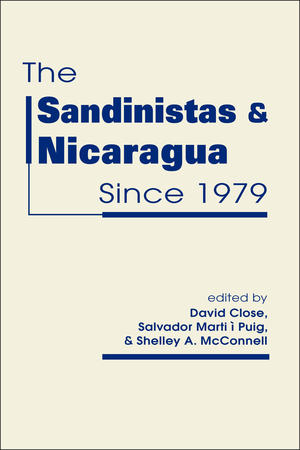 The Sandinistas and Nicaragua Since 1979 is a collection of 12 scholarly articles that analyze the country’s political institutions and leaders, its political culture, and their relation with the Sandinista National Liberation Front (FSLN). As the editors write in Chapter 1, this book is about the FSLN “and how it has affected Nicaragua since the party’s founding in 1961.” Although the various authors thoroughly cover Nicaragua’s history since the 1979 revolution, they largely focus on contemporary issues, such as abortion and the FSLN’s role in recent elections. The book covers a wide range of topics, from the reelection of Daniel Ortega in 2006 to the long-term influence of the 1979 revolution on poverty alleviation, social programs, land reform, feminism, and the country’s largely indigenous and Afro-descendant Caribbean region.

The collection explores the country’s recent political history from multiple angles covering historical information on the Sandinistas as an organization and political party.

Nicaragua: Living in the Shadow of the Eagle provides ample evidence of ongoing U.S. interventions in Nicaragua and how they continue to shape the country’s political, economic, and cultural life. Originally published in 1981 under the name Nicaragua, the Land of Sandino, this newly revised fifth edition features an extra chapter detailing the first reelection of Daniel Ortega in 2006. Most chapters also include sections on the role of the U.S. government in Nicaragua between 1990 and 2007. As the authors, political scientists Thomas W. Walker and Christine J. Wade, write in the preface, “the three administrations in this period—those of Violeta Chamorro, Arnoldo Alemán, and Enrique Bolaños—owed their existence in large part to heavy-handed U.S. involvement in the 1990, 1996, and 2001 elections.”

Walker and Wade cover Nicaragua’s history at length, from the pre-Columbian era through the Somoza dictatorship and the fall of the Sandinista government in 1990. The book highlights Nicaraguan economy, culture, politics, and foreign relations, and includes a list of acronyms and abbreviations, a detailed map of Nicaragua, and an elaborate, annotated list of English-language sources.