Peru’s 2009 water reform is not about alleviating water conflict, but about brokering the interests of international institutions and private sector investors.
Tweet
Barbara Lynch
February 9, 2015

The Río Santa, like many Peruvian rivers, faces a difficult future. Fed by glaciers and snowpack from the Cordillera Blanca and rain that falls on the Cordillera Negra, the highly contested river begins its 343-kilometer course in rough puna pastures 4,050 meters above sea level. It descends through mountain meadows, campesino communities, and small urban settlements in the Ancash region, rushes through the narrow Cañon del Pato, and flows onto the plains of Peru’s coastal desert. It then empties into the Pacific at Santa, a fishing port near the industrial city of Chimbote. The Río Santa is Peru’s largest westward flowing river, and most of the 2.6 million people living in Ancash and La Libertad depend on its waters for their lives and livelihoods.

While irrigators have long fought over the Santa’s waters, the growing presence of transnational mining corporations, energy corporations, and agribusiness enterprises has intensified conflict over its use. This has made the Santa basin a testing ground for the new institutions of Peru’s sweeping 2009 water reform. Funded and shaped in large part by the World Bank and the InterAmerican Development Bank (IDB), the reform replaced Peru’s 1969 water law with a new statute, created a national water authority (ANA), and built new hierarchies of subnational water institutions. The banks anticipated that the reform would spur production of hydrological information, coordinate water policy across ministries, create a culture of water conservation, and devolve responsibility for water allocation to river basin organizations representing diverse water user groups. The question for most observers of the reform is whether such legislation—ultimately technocratic in nature—would be able to address the root of the water conflicts endemic to the Santa basin.

These conflicts are testing the ability of the new water regime to meet the needs of communities whose survival depends on access to the resource. And total demand for water is accelerating as supply diminishes due to pollution and climate change. Tourists, transnational mining consortia, trout farms and fishmeal plants, small food producers and huge coastal agro-export firms, transnational energy corporations and community-managed irrigation and micro-hydro systems, and domestic water consumers in Chimbote, Trujillo, Huaraz, are all competing for the Santa’s waters. As a hydraulic engineer in Ancash told me, “management of the river basin’s water is the management of conflict.” 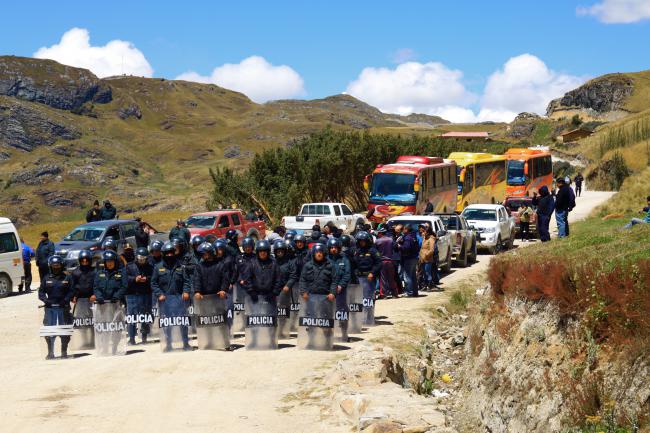 In the high puna pastures, mining companies and ore processors dump toxic waste into the Santa, making it unsafe for crop, livestock, and human consumption. Friction between mining companies and other water users came to a head in 2010 when Peru’s Ministry of Energy and Mines gave Chancadora Centauro, a Peruvian company, a permit for mineral exploration on the shore of Laguna Conococha, the river’s headwaters in Huascarán National Park. The concession aroused opposition from local governments, national government officials, campesino communities, commercial farmers, urban water users, and students. Police responded to the protests with force, killing one campesino organizer and wounding seven others. While the government suspended Centauro’s permit in 2011, it was not canceled, and participants fear that the park will be opened to mining again as the government removes legal obstacles to mineral development.

Further downstream, hydroelectric dams compete with campesino communities, commercial farmers, and urban residents. The long-simmering conflict flared in 2008, pitting rural and urban water users against the transnational corporation Duke Energy. At issue was Duke’s right to draw water from Laguna Parón—a spectacular glacial lake whose waters join with those of the Río Santa—to power the turbines of its hydroelectric plant. Campesinos complain that when Duke lets lake water surge into the river system, it causes soil erosion and makes irrigation difficult if not impossible. It also lowers lake levels, creating shortages of clean water for urban dwellers.

On the broad coastal plains, Río Santa water has irrigated export crops like sugar cane since the early twentieth century, but in the 1990s liberalization of land markets and construction of two massive irrigation projects—Chinecas and Chavimochic—meant rapid expansion of the acreage dedicated to export agriculture. Defined by the government as “Special Projects,” these two capital-intensive schemes enjoy considerable autonomy from state control, but they compete with one another. Chinecas irrigators have staged frequent demonstrations, claiming that Chavimochic irrigators are depriving them of their fair share of the river. The two projects are causing other conflicts downstream, as drainage and pesticide runoff raise pollution and salinity levels, making farmlands unfit for cultivation. Resolution of these conflicts is impeded by political competition between Ancash and La Libertad.

While these conflicts remain largely unresolved, others continue to erupt.

Ideally, the 2009 water law would have mitigated conflict by institutionalizing what the United Nations has defined as Integrated Water Resource Management, and bringing Peruvian water governance in line with the Dublin Principles. The Dublin Principles, drafted at the 1992 International Conference on Water and the Environment, define water as a finite resource and call for participatory approaches to water management. The Principles’ weakness lies in their assumption that water is an economic good that can be rationally allocated when technical knowledge is the basis for decision making. Adopting the language of the Dublin Principles, World Bank and IDB documents emphasized production of hydrological data, centralization of water governance authority in a single independent government agency, and devolution of responsibility for water allocation to state and civil society actors at the river basin level. Agency experts would produce information, monitor and enforce the water law, and “raise awareness about water challenges” among policy makers, civil servants, and the public. Citizens and stakeholders, consciousness duly raised, would participate in “demand side management.”

In practice, Peru’s water reform was a compromise between the technocratic vision of the World Bank and IDB and national political priorities. The 2009 law deviated from the neoliberal prescriptions of the banks: it did not privatize water, but defined it as a public good to be managed by the state, and it recognized the water rights of indigenous and campesino communities. On the other hand, the new water authority was not truly independent; housed within the Ministry of Agriculture, ANA is subordinated to agribusiness interests. While its mandate is to coordinate the needs of all water users, ANA is dominated by irrigation engineers who see their mission as building infrastructure and promoting large-scale irrigation technology that only agribusiness enterprises can afford. 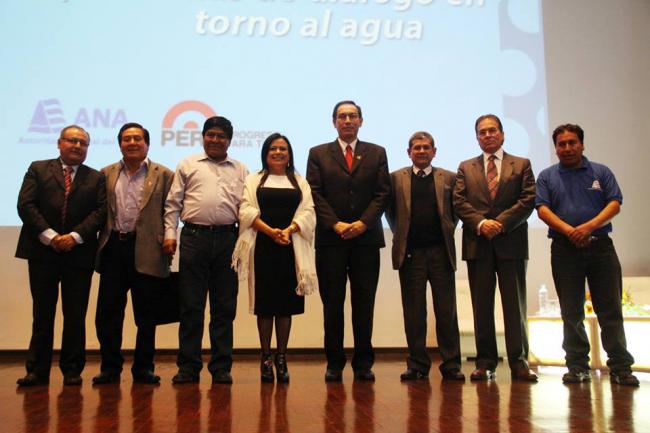 With its engineering bias, ANA lacks the expertise to address problems affecting communities that depend on the Río Santa for survival. It lacks agronomists who can assess the implications of cropping patterns for water supply, and it has no capacity to assess water quality and related public health or ecosystemic concerns, despite provisions of the water law calling for the preservation of river flow for ecosystem functions. In sum, while the agency can amass large quantities of hydrologic data, it has not proven able to translate this information into sound, integrated water management practices.

A signature piece of the water reform was to be the formation of river basin councils to manage water conflict. The councils, comprised of state and civil society actors would draft management plans and decide on water use priorities. In 2011, the Santa basin was one of six chosen for a $10.9 million experiment in “integrated watershed management” as part of a new IDB/World Bank project. The Santa basin seemed to be an obvious choice for the pilot project, as glacial retreat in the Cordillera Blanca—the Río Santa’s source—made it a poster child for climate change. The 2010 World Development Report described the upper watershed as desperately needing new approaches to water management, arguing that, despite widespread evidence of highly sophisticated Andean adaptations to variability in water availability, climate change “may be so rapid that traditional agricultural and water management practices are no longer useful.”

While the United Nations, the World Water Council, and the World Bank saw watershed councils as vehicles for the stakeholder participation needed to assure sustainable management of water resources, obstacles to their formation in the Santa basin were formidable. First, competition between the regions of Ancash and La Libertad, and among jurisdictions within Ancash itself, is intense, in no small part because the autocratic and reportedly criminal regional president of Ancash showed little interest in engaging with the middle and upper reaches of the watershed, and alienated sierra residents from the regional government. Second, competition among incompatible water uses is also severe. And finally, the rugged terrain of the watershed makes interaction difficult: bus trips to meetings can be prohibitively expensive for campesino community representatives and small farmers. Unsurprisingly, the process of watershed council formation has stalled.

Even if the process were to move forward, it is doubtful that the watershed councils mandated by the water law could manage conflict or allocate water equitably. Their composition, defined by law, reinforces the technocratic bias of the water regime: the councils are dominated by engineers, rather than an integrated group of specialists and local citizens such as agronomists, food producers, fishers, domestic water users, ecologists, or public health professionals. Irrigators have more power than other water users, and special projects like Chavimochic and Chinecas carry greater weight than the myriad small systems of local food producers. The widely dispersed campesino communities in the watershed must share a single representative. The same is true for the diverse array of non-agricultural water users—mines, energy firms, urban water users, recreational interests, and fish farms must share a representative despite the incompatibilities in their water uses and their vast differences of power and access to allies in the national and regional governments. Natural ecosystems have no representation whatever. Also excluded are residents of the poor urban neighborhoods of Chimbote and Trujillo, and of the new, informal settlements springing up near mining centers and agribusiness installations.

Assigning different weights to diverse political actors in a process of differential inclusion—while excluding others—makes it almost impossible to address the fundamental inequities and deep political divisions in the watershed that make conflict inevitable. It seems then that the purpose of Peru’s new water regime is not to encourage citizen involvement or alleviate water conflict. Rather it is to define the space in which state-civil society dialogue on water management will take place, and to determine which actors will be represented in that space.

In the technocratic institutional culture of the new water regime, the economic interests of the Peruvian state and those whose interests it brokers—namely international institutions and private sector actors—will prevail, and the voices of campesino communities, small farmers, and domestic water users will be weak. As a consequence, direct action tactics will still be essential tools for water users marginalized by the reform’s institutions. As these tactics are systematically delegitimized by the state, they will be more likely to meet with violent repression, intensifying conflict in the watershed.

Recently retired from Georgia Tech’s School of International Affairs, Barbara Lynch’s research focuses on water governance in Peru. In addition to her research on the Río Santa watershed, Lynch collaborated with a team from the Pontificia Universidad Católica in Lima to produce a volume on conflict in the Ica watershed.