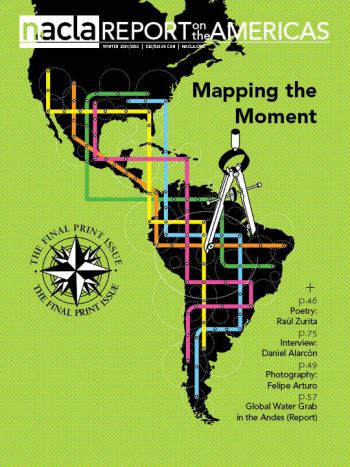 In our final print issue, “Mapping the Moment,” we chart the social and economic conditions shaping both U.S. hegemony and resistance today. You’ll read about Edward Snowden’s NSA revelations, free-trade policy showdowns, Obama’s new Cuba policy, the left turn’s legacy, the drug war’s entrenched bureaucracy, and the role of our earth’s finite resources in societal transformation. You’ll also read about the contentious solidarity work of movements struggling for change along identity-based lines, be they Latina/o, LGBT, Afro-descendant, feminist—or all of the above.

Our Report, “Global Water Grab in the Andes,” guest-edited by Heather Williams, explores the clash between basic needs and the demands of transnational capital, nowhere more acute than in the Andes. With U.S., European, and Chinese demand driving global commodity prices upward in the last decade, Andean governments are now allocating existing surface and groundwater to the highest bidder, and ignoring the objections of communities to the de facto theft of water by failing to regulate polluters.

Editor's Note
Colette Perold
In our final print issue, “Mapping the Moment,” we chart the social and economic conditions shaping both U.S. hegemony and resistance today.

From Around the Region

A Case for Hemispheric Unity (sidebar)
Ed Morales
The Radical Statehood doctrine made assertions that seem all the more relevant for U.S. Latinos today.

Can Washington Still Dictate Drug Policy in the Americas?
Coletta A. Youngers and Adam Schaffer
Washington has succeeded in creating an entrenched drug-war bureaucracy across Latin America. But the momentum in favor of reform is building in unexpected places.

Feminism Under Construction
Elisabeth Jay Friedman
For feminist organizing in Latin America, divergent identities and political beliefs must be seen as fundamental, rather than incidental, to the movement.

Looking for the Left Turn
Alejandro Velasco
Beyond binaries and generalizations, vilification and glorification, where do we find Latin America’s “left turn” today?

Moving Beyond the Extractivism Debate, Imagining New Social Economies
Nicole Fabricant and Bret Gustafson
Extractivism today shapes a new hegemonic order that is sutured to global capitalism. What might a long-term mapping of its social and economic consequences reveal?

Revealing the Race-Based Realities of Workforce Exclusion
Tanya Katerí Hernández
Advocates in the fight against poverty in Latin America often center class above race as the factor that most determines Afro-descendants’ life-chances. But a growing movement is setting the record straight.

Washington’s ‘Divide and Conquer’ Free Trade Agenda
R.A. Dello Buono and Ximena de la Barra
From the defeat of the Free Trade Area of the Americas in 2005, to Washington’s sub-regional free-trade showdowns, to now, the biggest threat, the Trans-Pacific Partnership.

What Obama’s New Cuba Policy Means for the Rest of the Americas
Arturo López-Levy
While Washington won’t be able to break apart Latin America’s “pink tide,” its new stance on Cuba is a test case for reasserting U.S. hegemony in the Western Hemisphere.

Who the Rainbow Tide Leaves Out
Annie Wilkinson
The high-profile LGBT rights gains of the last decade remain inaccessible or irrelevant for much of Latin America’s LGBT population.

Can the Technocrats Calm Peru’s Troubled Waters?
Barbara Lynch
Peru’s 2009 water reform is not about alleviating water conflict, but about brokering the interests of international institutions and private sector investors.

Glacial Retreat in the Andes (sidebar)
Heather Williams
Climate-linked threats to economies, human health, and agro-ecosystems undoubtedly will occupy a growing place in the politics of land and water in the Andes.

Interview with Anti-Extractivist Mayor Ramiro Trujillo (sidebar)
Rachel Conrad
"We have seen that there is bountiful knowledge and bravery here to defend the right to water. We are always united."

Introduction: Global Water Grab in the Andes
Heather Williams
International demand for gold, groceries, and energy is driving destructive policies that pollute and deplete the water supplies of rural communities and parched cities.

Peru’s Media-Friendly Mining Ban Conceals Toxic Inaction
Heather Williams
Humala’s 2014 ban on informal mining has made for good press, but done little for the local communities the mines pollute or the majority of mine workers they employ.

Rhetoric and Reflections on a Crisis
David Hernández
NACLA panel discussion on open borders and lessons from the summer’s child migrant crisis.

Autocracy: An Invisible Dictatorship
Eduardo Galeano
In the name of free enterprise, freeways, and the freedom to buy, city air has been made unbreathable. The car is not the only guilty party, but it is the one that attacks city dwellers most directly.