Who the Rainbow Tide Leaves Out 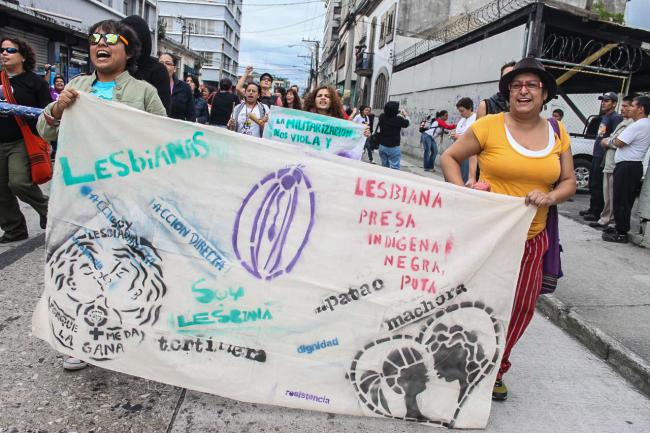 Much ado has been made about Latin America’s so-called “Rainbow Tide.” The growing numbers of Latin American countries that have adopted same sex marriage, banned discrimination on the basis of sexual orientation, and removed barriers for changing legal sex for transgendered people, have led many to ask the question—as posed in so many words in a January 2014 New York Times “Room for Debate” feature—“Why is Latin America So Progressive on Gay Rights?” Analysts have attributed this policy change sweep largely to the region’s LGBT activists’ creativity, strategic use of human rights discourse, and alliance-building ingenuity. But for a long list of LGBT people in the region, particularly those who are poor, indigenous, Afro-descendent, gender non-conforming, or trans, questions remain about what’s at the end of the rainbow for them.

In 2008, Panama and Nicaragua became the final Spanish-speaking countries in the region to decriminalize same-sex relations. Beginning the following year, a number of local, state, and national governments legalized same-sex marriage through legislation or successful court challenges, including in Argentina, Brazil, Uruguay, and Mexico. More have recognized other forms of partnership rights, as in the uniones de hecho (common law marriages) of Ecuador and Colombia, with similar legislation under discussion in Chile and Peru. Now roughly half a billion people in the Americas live in jurisdictions where same-sex marriage is legal, and those who live in Mexico City, Uruguay, and Argentina may freely adopt children regardless of sexual orientation.

Inroads have also been made in recognizing the right to determine one’s own gender identity. The most notable is Argentina’s groundbreaking 2012 Gender Identity Law, among the most progressive in the world, which removes psychiatric diagnoses, medical interventions (including sterilizing surgeries), or judicial permission as requirements for changing one’s legal sex (and name). It also guarantees access to hormone therapy and sex-reassignment surgeries if desired.

Beyond policy changes, the visibility of LGBT people and activism has soared since the first cited openly gay advocacy organization launched in Argentina in 1969. Today, São Paulo’s annual LGBT pride parade is said to be the largest in the world. And growing numbers of openly LGBT politicians have taken office, among them Benjamin Medrano, mayor of Fresnillo, Mexico since 2013, Carina Vance, a lesbian appointed Minister of Health in Ecuador in 2012, and Luisa Revilla Urcia, a transgender local councilwoman who took office in Trujillo, Peru in January of this year.

But who is actually benefiting from these policy changes? To begin, policy changes have not been universally affirmative across the region. For example, while same-sex marriage or other forms of partnership rights have been adopted in a handful of countries, nearly as many countries have pre-emptively constitutionally banned it by defining marriage as between a man and a woman, further entrenching the heteronormative family into the nation’s political fabric. These countries include Honduras (2005), El Salvador (2009), Ecuador (2008), and the Dominican Republic (2009).

And several countries in Latin America and the Caribbean still criminalize homosexual acts, particularly those previously colonized by the British, including Belize, Guyana, Jamaica, and many of the smaller island nations. In these countries in particular, as well as in Haiti—a major host of U.S. missionaries, particularly since the 2010 earthquake—strong ties with U.S. and European conservative evangelical groups have led to fervent anti-gay activity, including large public marches decrying homosexuality (as in Jamaica, Haiti, and Belize), in some cases stirring spates of homophobic violence.

While Argentina and Uruguay have made strides to remove obstacles for transgender people to access legal rights and health care, trans identities are still pathologized in most of the region, where legal sex and name change, along with access to appropriate health care, remain out of reach, leaving much of the region’s trans population without proper identification documents, exposed to breaches of privacy and violence, and often left to dangerously self-medicate with hormones or silicone acquired on the street.

Where positive policy changes have taken root, they have in many cases not translated into widespread impact or improved realities for LGBT people. Marriage benefits have mostly reached the urban upper or middle classes (where such a population exists), while for poorer and rural gays and lesbians, economic or social barriers render this major policy shift practically meaningless. For example in Ecuador, same-sex common-law marriages are only serviced by a handful of notaries across the entire country, excluding the vast majority of the population from accessing them. And local ordinances or constitutional clauses banning discrimination, while symbolically important, fail more often than not to consider gender identity at all.

Available data indicates that even amid headway in formal recognition of rights across the region, increases in anti-LGBT violence positions Latin America as possibly the most violent region in the world for LGBT people, as suggested in a recently published report by the Inter-American Commission on Human Rights. The report documents homophobic or transphobic killings of at least 594 people in the Western Hemisphere in just over a year (January 1, 2013 to March 31, 2014). In Honduras, murders of lesbian, gay, and transgender people—particularly among political activists—have skyrocketed. In just this time period, the small country counted at least 29 such murders. And not everyone is equally affected by the high rates of violence. Available data consistently show that transgender and visibly non-conforming people bear the brunt, as well as those from brown(er) or black(er) populations among Latin America’s deeply racially stratified societies.

Further, police harassment, including sexual violence, remains rampant throughout most of the region, particularly for transwomen and other gender non-conforming people. Reports from across the region—both anecdotal and documented—tell stories of sexual assault by police officers, as well as humiliating and torturous practices, particularly against transwomen, such as confining them in the trunks of cars, publically stripping them, extorting sexual favors, and even forcing them naked into canals in local parks.

The belief that homosexuality is a sickness in need of a cure, spurred on by some conservative religious organizations like Courage (a Catholic ministry) or Exodus Global Alliance (an evangelical protestant ministry), remains widespread region-wide, providing a constant supply of mostly young LGBT people for the private practice of “conversion therapies.”

Thus, attempts to generalize the past decade regarding LGBT rights in the region yield at best what scholar Omar Encarnación in 2011 called a “paradoxical trend” of “rising anti-gay violence in the midst of a gay-rights boom.” For much of Latin America’s LGBT population—especially those who are poor, trans, dark, or gender non-conforming—Mexico City’s glamor, the relative safety of Rio de Janeiro’s white and wealthy gay professionals, Ecuador’s anti-discrimination guarantees, or Argentina’s promise of marriage and adoption, are either irrelevant or inaccessible.

This hasn’t stopped the continued work of creative LGBT activists across the region from working towards social and political transformation. While many mainstream organizations continue to focus on lobbying to expand such policy changes along the trajectory outlined above, many other activists on the margins, especially lesbian, transfeminist, and radical groups, have a decided focus on promoting social change with a keen intersectional analysis and recognition of the multiple forms of discrimination faced by much of the region’s LGBT population, including racial discrimination, sexism, and economic oppression.

Creative examples include public campaigns to address disparaging, pseudo-scientific labeling of trans identities, street art and theater, regional campaigns like the innovative “Curas Que Matan” (Priests Who Kill) that challenge conversion therapies, and training of local police to respect the rights of transgender people. These crucial efforts aim to counter the epidemic of violence and exclusion that remain commonplace for the majority of Latin America’s LGBT population, ensuring that broad change in favor of LGBT peoples’ pursuit of employment, pleasure, health, and safety is implemented beyond the high-profile policy level to which it is confined today.