"We have seen that there is bountiful knowledge and bravery here to defend the right to water. We are always united."
Tweet
Rachel Conrad
February 9, 2015 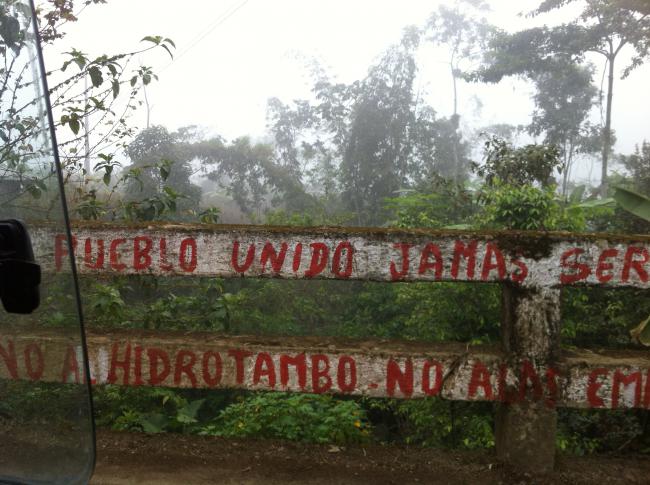 Señor Ramiro Trujillo is the current mayor of Chillanes, the county that encompasses the privatized Dulcepamba watershed in Ecuador. During his mayorship, he has consistently supported the affected communities. He has been both criminalized and physically threatened for not buying into the ruling party Alianza PAIS’s extractivist politics. His story sheds light on the way that the Ecuadoran federal government’s prioritization of hydroelectric production has swayed local politics.

Rachel Conrad: What have been the main transgressions committed by Hidrotambo against the people of your county?

Ramiro Trujillo: There have been many continued human rights violations against the underprivileged communities of the Dulcepamba watershed. The first violation is the lack of prior informed consultation surrounding the project, which is required by our country’s Constitution. The National Advisory Board on Electricity (CONELEC) requires a Citizen Participation Record from each company that wishes to build a hydroelectric dam, which should contain the signatures of the individuals surrounding the project site, affirming their support of the project. Hidrotambo instead turned in a paper that contains the names and signatures of people who were interested in being employed by the company to work on the dam’s construction.

They also invaded land without legally expropriating it, and physically and psychologically injured people from the region. They shot them and hit them, and sent them to jail for “terrorism” and “sabotage” even though all they had done was defend the right to water and the rights of Pachamama.

Can you describe the actions that have been taken against you for defending the people of your county?

The owners of Hidrotambo presented a legal case against me for “terrorism” and “sabotage.” Political and economic pressures from Hidrotambo and the national government swayed six county councilors to make up a legal case against me, with which they threw me out of office in an unconstitutional, disrespectful, and violent way. It was brutal. Responding to a request from the owners of Hidrotambo, the councilors contracted hitmen who came to my home. Luckily, the police detained them, and brought them to jail. We have photos and everything.

What kind of pressure did you receive from Alianza PAIS, president Correa’s political party, to support the Hidrotambo project?

When Engineer Jorge Glas was running for vice president of Ecuador, they invited me to meet him. When I met him, Señor Glas said, “Ah! You are the mayor of Chillanes! I would like to see you wearing the shirt of Hidrotambo.” It felt like a dare. “I replied to him: it depends, Señor Jorgito. Only if your government listens to our needs.” Right after that is when I was kicked out of office.

What are your concerns about future access to water for the people of the Dulcepamba watershed?

Hidrotambo could control access to water for hundreds and hundreds of years, because their water concessions have virtually no expiration date. We worry that when Hidrotambo’s dam finally starts to work, they will use force, threats, and destructive mechanisms in order to block the people from using water during the seven months of the year when water is scarce.

When we don’t have access to water, our lands will not produce anymore. Our brothers and sisters will have to migrate to cities, which will cause internal social collapse. And if we are forced to go to cities, what will we do? We are not prepared to enter into an urban culture and economy.

Why do you think that Hidrotambo chose to build their project in a watershed that contains such a small quantity of water?

San Pablo de Amalí and Chillanes are considered to be very underprivileged communities. They think that we do not understand a lot of things and cannot defend ourselves. This is not true. We have seen that there is bountiful knowledge and bravery here to defend the right to water. We are always united.

Rachel Conrad is an environmental analyst, Fulbright Scholar, and activist. Since graduating from Pitzer College, she has worked to support farming communities in the Dulcepamba watershed in Ecuador in their struggle for water justice, and is a part of the team collecting data on the Dulcepampa water supply and demand. Learn more about the Dulcepamba Project at www.waterjusticedulcepamba.com.