For feminist organizing in Latin America, divergent identities and political beliefs must be seen as fundamental, rather than incidental, to the movement.
Tweet
Elisabeth Jay Friedman
February 18, 2015 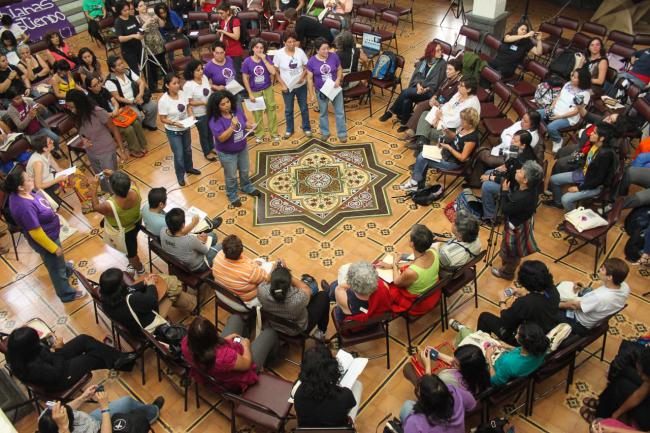 The mobilization of mutual solidarity among Latin American feminists did not begin because of the Internet. It did not get underway due to the 1975-1985 UN Decade on Women. Nor is it an offshoot of U.S. or Western European models. Transnational solidarity has characterized feminist organizing in Latin America since as early as the nineteenth century, when elite feminists became “godmothers” to each others’ organizations, eagerly read each others’ publications, and lobbied regional scientific congresses to include their issues.

Today, regional feminist mobilization is a contested matter—and for the better. Diverse in its participants and uncompromising in its commitment to justice, contemporary cross-border feminism nurtures the many points of divergence in its participants’ identities and political beliefs to build a movement that is constantly, and productively, redefining itself. There is no more inspirational place to find the vibrancy and diversity of the movement than in its most tangible manifestation, the Latin American and Caribbean Feminist Meetings, or Encuentros. Reflecting and refracting the development of feminist identities across the region, the Encuentros illuminate the differences cross-cutting women’s experiences as well as their common search for transformation.

Latin American and Caribbean feminist networking produced dramatic impacts worldwide, parallel to the early development of the Encuentros. In the late 1980s, Latin American feminists were among the founders of the most successful and widely known global movement space for women: the women’s human rights movement. Drawing on their own experiences fighting for human rights during periods of fierce authoritarian repression, they helped to develop the now-widespread idea that “women’s rights are human rights, and human rights are women’s rights,” bringing human rights tools and organizations to bear on gender-based violations. Simultaneously, feminists organized across the region to influence the drafting of, and then insist that their governments sign on to, the first international law on violence against women, the Inter-American Convention for the Prevention, Punishment and Elimination of Violence against Women. This path-breaking treaty seeks to eradicate both domestic violence and state-sanctioned abuse of women.

Regional diffusion of economic models, political realities, and social dynamics have reinforced the common challenges feminists face, providing them further impetus to come together. The inspirational wave of 1980s democratization was followed by the disillusionment of unfulfilled rights and the constrictions of economic austerity. Today’s left-leaning governments too often attempt to rescue the poor without restructuring the systems that undergird socioeconomic inequality. These governments may pay attention to women’s descriptive representation, and some of them have begun to recognize the rights of their lesbian, gay, and transgendered citizens. But major challenges to women’s substantive demands remain. Women suffer high rates of feminicide and domestic violence; inequitable access to health care and legal abortion compromise reproductive autonomy; transgender people suffer from daily violence; and race and ethnicity are heavily correlated with subordinate economic and social status.

But over the past 30 years of the Encuentros’ development, feminists have nurtured a space for exchanging analysis and confronting conditions of oppression. 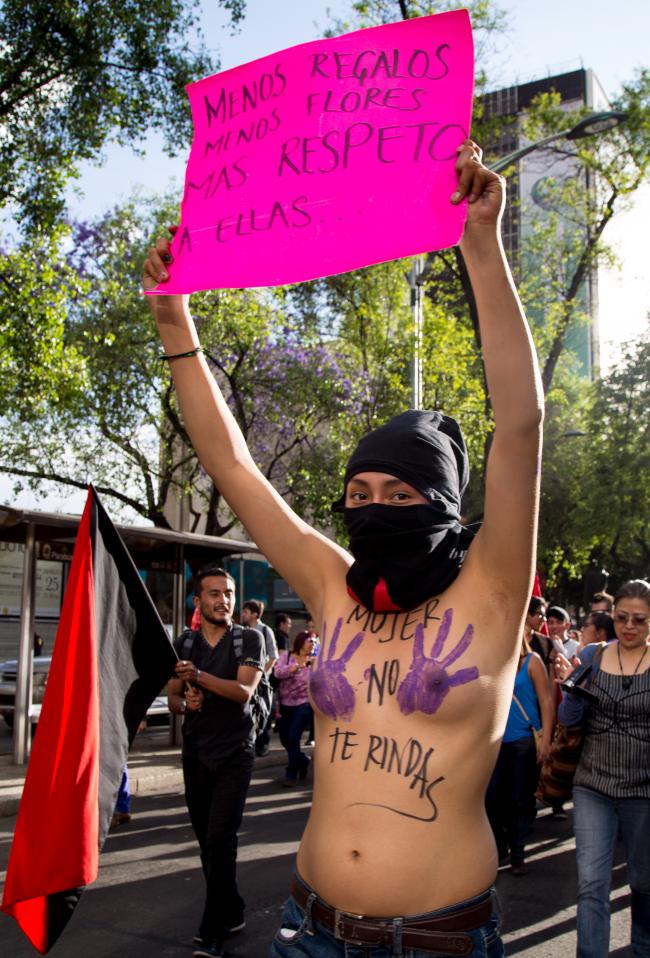 Begun in 1981 and held every few years in different countries, the Encuentros are dedicated to face-to-face discussion for transformation. According to a 2009 report by Alejandra Restrepo and Ximena Bustamante, attendance has grown from 180 at the first meeting in Bogotá to a high of 3,200 in San Bernardo Argentina in 1990; more recent participation is well over 1,000. At the first Encuentro, participants came from 10 Latin American and Caribbean countries (as well as countries outside the region); at the most recent Encuentro, women from 14 countries gave talks or facilitated workshops. While a wide range of countries is always represented, the host country tends to be overrepresented in both participation and planning, and prohibitive travel costs keep many from far away or with fewer resources from taking part.

But beyond the meetings themselves, the wide circulation of Encuentro documents, debates, and personal experiences have strengthened the feminist networks that crisscross the region. For example, one of the networks that sends delegates to the Encuentros to then disseminate their findings back home is the September 28 Campaign for the Decriminalization of Abortion. Begun at the Fifth Encuentro in 1990 with representatives from 12 countries, this network meets during the meetings to develop common strategies for shifting public opinion, providing services, and promoting legislative change on women’s reproductive autonomy.

The transnational exchange afforded by the Encuentros has spurred the growth, often contentious, of regional feminisms. While participation in the earliest Encuentros was limited in terms of class and ethnic origin, even at that stage feminists were dedicated to widening and deepening what Restrepo and Bustamante cite as “the organized participation of popular sector women,” or those from grassroots community movements. And immediately, popular sector women demanded to be heard. By the second Encuentro, black and indigenous women insisted that they and their issues be incorporated into the Encuentro agendas, with racism analyzed as a central vector of women’s subjugation.

As became clear by the third and fourth Encuentros, expanding inclusion would mean finding means to transport, feed, and shelter lower-income participants. Encuentro organizing committees began reaching out to external sources, and according to Restrepo and Bustamante, by the ninth Encuentro in 1999, the sponsors included a mix of foundations and state agencies from the UK, United States, Holland, Germany, and Switzerland; from Oxfam to UNIFEM, and from the Spanish development agency to the Global Fund for Women. With the expansion of participants came an explosion of agendas. As explained in a 2002 article I co-wrote with colleagues in Signs, with increased representation of “class differences, rural-urban divisions, diverse racial and ethnic formations, age and generational divides, as well as differences in sexual identities and orientations,” there was no longer a consensus on “uniform understandings of key feminist concerns such as reproductive health, education, violence against women, labor rights, sexuality, and (neoliberal) globalization.” 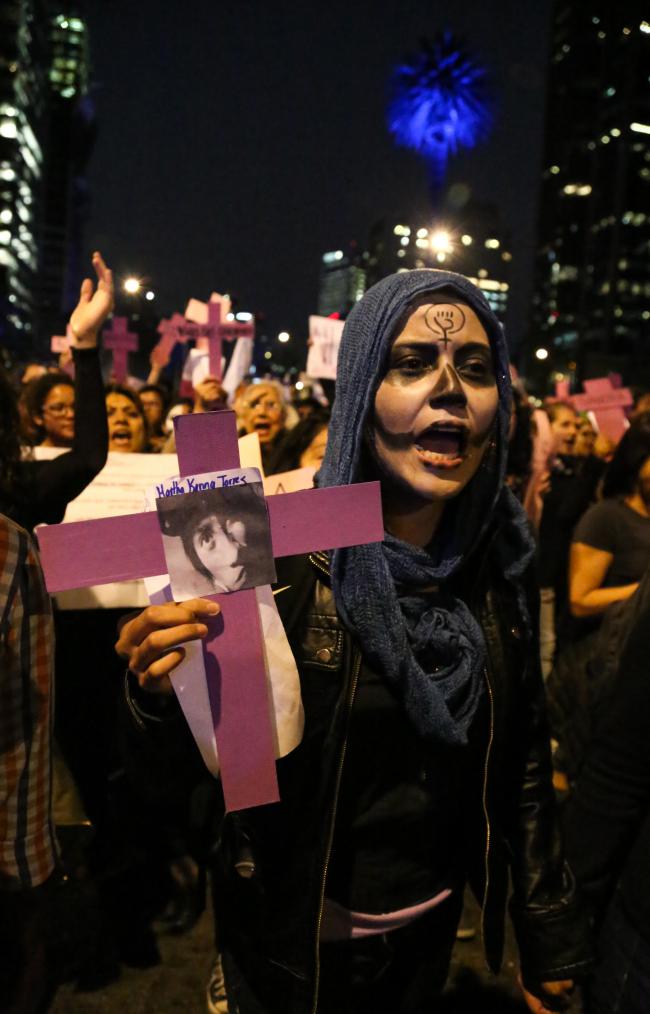 Fifteen years later, transnational deliberations continue to push the limits of what feminism is and who feminists are. At the 13th Encuentro in Lima, Peru, this past November, a central axis of work was “critical interculturality,” a key concern in Peruvian feminist movements. “Communitarian,” “intercultural,” and/or “decolonial” feminism made frequent appearances on the program, as organizers and attendees grappled with the intersections of gender and ethnic identity and oppression. Other challenges included the full incorporation of transfolk: although transgender women have openly taken part in Encuentros for nearly a decade, transmasculine participants questioned the gender binary the Encuentros continue to uphold, as formally, Encuentro participants must identify as women. As illustrated in a declaration by the “Coven of young feminists” at the 13th Encuentro, young women critiqued “adultcentrism,” or “a world that is enunciated from white, heterosexual adults,” and added their voices to those seeking the “radical decentralization” of feminism.

New blueprints for feminist action undergird and intersect Encuentro debates over feminisms’ meanings. For decades, participants have argued about where feminists should put their energies. Some have insisted on the autonomy of single-gender, politically unaffiliated groups. Others have noted the importance of organizing across movements, working with left political parties, or dialoguing with, if not joining, state agencies. And others have focused on the insertion of external funding into the Encuentro circuit: Does it inevitably turn agendas and actions towards the ideas and goals of those outside the region? Or can it strengthen change-making by underwriting broader participation and maintaining spaces for dialogue? Are there any realistic alternatives? Transnational space for debate has not led to single answers to these questions, but it has enabled exchange on the efficacy and ethics of feminist engagement.

This is as true about communications as any other aspect, and the increasing imbrication of internet-based communication with movement activities illustrates these experiments. Beyond orientation materials, the website for the most recent Encuentro (13eflac.org) boasts a history section as well as podcasts and updates from the Encuentro; Facebook has also been pressed into service, as has the Indiegogo fundraising site. These innovations show seeming limitations: few readers have used the arena for engaging in debate on online articles; likewise, Facebook commentary mainly takes the form of “likes”; and the Indiegogo campaign raised only 19% of its $15,000 goal. But these results must be understood within the broader context of feminists’ Internet use: beyond issues with access, open sites may not be the place to engage controversies difficult enough to manage in a face-to-face context. And the ambition of self-financing—which no Encuentro has fulfilled—cannot be accomplished in a single cycle on a platform not yet available in Spanish and Portuguese.

Despite the many debates that characterize the Encuentros, their final declarations always point to common action items. This Encuentro’s demands include liberty for the 17 women imprisoned for obstetrical complications under El Salvador’s total abortion ban; justice for the students murdered in Mexico; an end to governmental complicity with feminicide and the abuse of human rights defenders; respect for the rights and movements of sex workers, migrant women, women with disabilities, and indigenous women.

Looking through the lens of the Encuentros reveals that alliances and common strategies are possible in regions as diverse as Latin America, but only by taking differences as fundamental, rather than incidental, to feminism. Transnationalism is not simply a matter of figuring out targets and how to hit them, but a conscious effort to build movements with room for both a splendid array of distinctions and open debate over how to best address multiple and overlapping sources of oppression. As participants in the most recent Encuentro affirmed in their Final Declaration, “we know that there is not a single answer,” but that the “search for understanding” continues, because they will return to “encounter”: “to construct a common space, not of identicals nor of sisterhood, but of political dialogue and disagreement, in the recognition that dissidence nurtures us, that disagreements—recognized and worked through, makes us grow as a movement and widens our horizons of possibilities.”

Elisabeth Jay Friedman is Professor and Chair of Politics and Professor of Latin American Studies at the University of San Francisco.